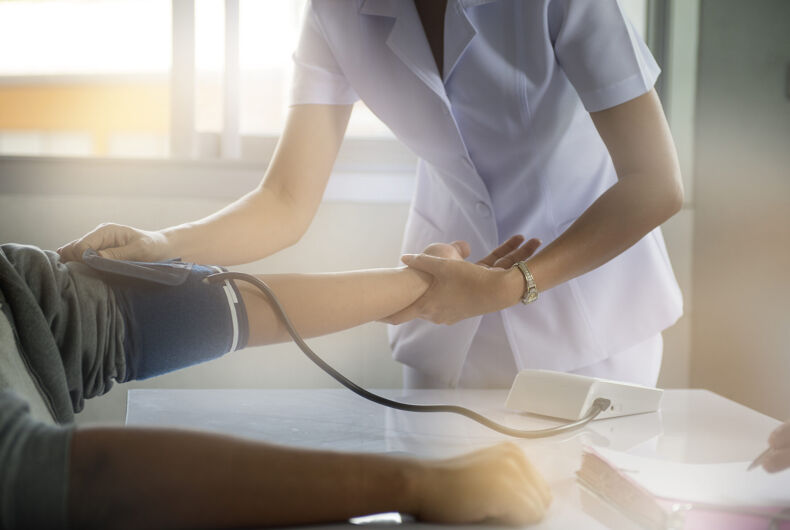 Valerie Kloosterman, a Christian physician assistant (PA), is suing the University of Michigan (UM) Health-West healthcare system for violating her religious rights because it wouldn’t allow her to misgender and refuse medical care to transgender people. She claims that she deserves “religious exemptions” from hospital practices and said that she was called “evil” for refusing to provide medical care.

Kloosterman worked for UM Health-West for 17 years. But in 2021, hospital administrators began requiring her to act “against her sincerely held religious convictions and her medical conscience” by using “biology-obscuring pronouns” and making “referrals for ‘gender transition’ drugs and procedures,” Kloosterman’s lawsuit against the healthcare system said. She refused to complete documents saying she’d adhere to these standards of care.

When she requested a religious accommodation to these policies — believing that they violated her religious beliefs and her Hippocratic oath to “do no harm” to patients — her managers called her to a meeting. She said that identifying patients by their chosen gender identity could cause them to miss important health screenings or receive improper medication or care.

There, the lawsuit states, “they denigrated her religious beliefs,” called her “evil” for refusing trans-related care and a “liar” over her claim to have good working relationships with gay and lesbian patients, “mockingly told her that she could not take the Bible or her religious beliefs to work with her,” and said that refusing to use patient pronouns could lead to “gender dysphoria-related suicides.”

Officials denied her request even though they had allegedly approved similar requests allowing doctors not to perform pelvic exams on women, toenail and hemorrhoid removals, and others not to prescribe diet pills or opioids. The lawsuit said that UM Health-West regularly allows providers to use “independent medical judgment” and to refer these needs to other providers with no other interruptions to patient care.

The hospital later fired her on August 24, 2021, and issued a termination letter that falsely stated, the lawsuit says, that she had tried to change patients’ genders on official documentation (something the suit claims health network PAs don’t have the ability to do).

She says the firing violates Title VII of the Civil Rights Act of 1964, a federal law that prohibits anti-religious discrimination, as well as her First and Fourteenth Amendment rights to free speech and equal protection under the law.

“As a devout Christian, Ms. Kloosterman believes that one’s sex is ordained by God, that one should love and care for the body that God gave him or her, and that one should not attempt to erase or to alter his or her sex, especially through drugs or surgical means,” the lawsuit states. She also believes that puberty blockers, hormone therapy, and gender-affirming surgeries are “experimental” and harmful — even though all major U.S. medical associations recommend them — and that it’s “sinful” for patients to want them. She also opposes same-sex marriage, the lawsuit says.

Kloosterman objected to the hospital guidelines even though she had seen LGBTQ patients in the past, correctly used their personal pronouns, and had never been asked to assign patients the drugs or procedures that she opposes. As “proof” of the “dangers” of trans-related healthcare, her lawsuit cites one study of possible hormone side effects, cases from the U.K., and research showing that trans youth experience other life and mental hardships.

Her lawsuit cites the 2018 Supreme Court decision in Masterpiece Cakeshop. v. Colorado Civil Rights Commission, a case involving a baker who refused to make a cake for a same-sex wedding, noting that the court justices said that the government “cannot impose regulations that are hostile to the religious beliefs … [or] act in a manner that passes judgment upon or presupposes the illegitimacy of religious beliefs and practices.”

Kloosterman is being represented by First Liberty, a “religious liberty” legal advocacy group that has successfully sued for the right of anti-LGBTQ schools to receive taxpayer support. Her lawyers are requesting reinstatement, backpay, other damages, and a UM Health-West policy change that would require the health network to allow such “religious accommodations” from now on.

But Kloosterman’s case has several holes.

Foremost, every major American medical and mental health association says that gender-affirming care improves the well-being of trans people. The care Kloosterman opposes isn’t “experimental.” Gender-affirming surgeries have been practiced for nearly a century, and puberty blockers have been used for decades on trans children as well as cis children with certain conditions with neither harmful nor permanent side effects.

Secondly, while UM Health-West may have enough resources to simply refer trans patients to other medical providers who feel comfortable providing their necessary care, not all health institutions do. As such, if Kloosterman’s request for religious accommodation was extended to everyone working in medicine across the nation, medical providers of all sorts — from clerks and ambulance drivers to therapists, surgeons, and pharmacy workers — would be allowed to deny any care they object to. This would especially affect poor people and rural areas that can’t access larger health networks.

Lastly, her case gets to the larger issue of whether public accommodation and non-discrimination laws compel individuals to take actions that they personally disagree with, even when they’re legally and professionally obligated to do so by local ordinances or standards of care.

Jennifer Pizer, acting chief legal officer of Lambda Legal, said that allowing such exceptions would mark a “profound” change in law and effectively nullify LGBTQ anti-discrimination protections, leaving LGBTQ people to constantly wonder whether they’ll be cared for in the medical realm or any other business or public accommodation.

Today is GLAAD’s annual Spirit Day to support LGBTQ youth. Here’s who celebrated across the web.