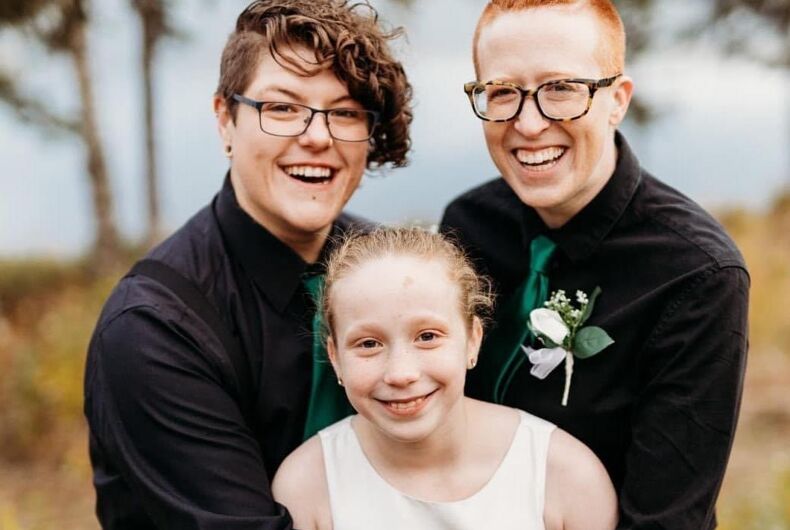 Dr. Tracey Wiese, right, with her wife and their 11 year-old daughter.Photo: Tracey Wiese

“I kept hearing her name everywhere. It’s like this nurse, this person is like everywhere in town, doing so many different things.” That was how Daniel Stanton, a 65-year-old transgender Army vet, heard about the woman who was tirelessly working to improve the lives of thousands of LGBTQ people across Alaska and would later earn his nomination for LGBTQ Nation‘s 2022 Hometown Hero.

“I was about 25, 26 when I first started doing private practice,” said Dr. Tracey Wiese, now 38, a bright-orange redhead with a broad smile and dazzling blue eyes. “I had only been out for a few years, but it was really clear to me that the queer community in Alaska did not have very many resources. So I sort of blindly was like, ‘I’m going to open an LGBTQ health clinic!'” Wiese laughed at the thought.

“So that clinic is called Full Spectrum Health. And that very quickly became sort of this amazing, and also ridiculously stressful and unsustainable, for-profit business venture.”

Wiese grew up an Army brat, born in Germany and raised all around the U.S. before landing in America’s Last Frontier when she was 14. After two years of college in Oregon, she returned home to earn a BS in Nursing at the University of Alaska, Anchorage, followed by a Masters in Nursing: Family Practice, a Post-masters certification as a Psychiatric Nurse Practitioner, and a Doctor of Nursing Practice, “which is akin to a PhD, but the purpose of a PhD is to generate research, and the purpose of a DNP is to like, say, ‘Okay, your research is nice but here’s how we apply that in the actual real world,” she explains with a laugh. “So it’s meant for folks who are staying in practice.”

Or trying to. “You know, there’s a disproportionate burden of physical and mental health issues amongst the queer community, and I was feeling that in our bottom line, as far as just people not being able to afford their health care. We had had so much feedback from our patients that what we were doing was saving lives and, you know, I was so burnt out. I was working — oh man, it always makes me want to cry — probably 80 to 90 hours a week, just trying to keep the clinic open and do all the social work that was necessary.”

Wiese said: “That was really around the time where I was like, I can’t keep doing this.” So she approached Identity Health, a non-profit offering adjacent health care services, to see if it made financial sense to model her own business as a non-profit and work together.

Wiese’s practice “had become such an important resource in the community, when I told them that I was going to have to close, you know, some magic came together and they decided to completely shift the industry that they were in and essentially six-tupple their budget,” folding Spectrum into Identity. Wiese laughed with relief: “They said yes” to the proposal.

Now, Identity Health Care is the first and only non-profit clinic offering continuity of care for the queer community in the state of Alaska.

“And now I am an employee,” Wiese says happily. “I work as the clinical director and we are exponentially growing every month. We now have a clinical team. We have support staff. We have an Operations Director, and we just received a fairly significant amount of grant funding from the municipality of Anchorage, for which we’ll find a match now that we’re eligible for grant funding. So we’re hopefully going to be able to fill that gap between patients who can’t pay, or low payments from government-sponsored insurance, and be able to still have staff. We have a huge need for social work and behavioral health, so we’re trying to get those needs covered.”

Wiese described the unique circumstances around mental health for the LGBTQ community in the state: “Alaska, in general, has very high rates of interpersonal violence, child abuse, alcoholism, substance use, and chronic mental health conditions. And there’s a lot of theories around that: isolation, darkness, extreme climates, isolation from outside resources. So Alaska Native men living in rural Alaska have the highest suicide completion rate in the nation. And when we look at that with an intersectional lens, and we know that queer people also have very high suicide completion rates, that puts the suicide risk for the queer population and Alaska at probably highest in the nation.”

Wiese takes particular pride in Identity’s use of telemedicine. “It’s hard for queer people who live in rural Alaska, because in a lot of rural Alaska communities, there’s one health clinic. You can’t go anywhere else, and it’s most likely that your friends or family work at that clinic. So there’s really no way to not out yourself at those village clinics. And so we do telemedicine to the entire state of Alaska. We do puberty blocking, we do PrEP, we do STI testing.”

Asked about her home life, Wiese explains, “I’m happily married to my spouse and we share custody with my ex-husband of my 11-year-old daughter and our two dogs and two cats.”

But when asked about coming out, in short order Wiese manages to shift the focus back to those she’s helping.

“I was actually married at the time, and after coming out, and being a part of the community for a bit, you know, I started making friends, and I stood in my kitchen one day, and I have a trans-masculine friend who was crying in my kitchen. He’s like, I can’t find anybody to prescribe my testosterone and I looked at him and said, ‘Well, that’s dumb, I can prescribe it,'” Wiese recalls, laughing at her naiveté.

“But I knew nothing about gender-affirming care. So as soon as I started diving into the literature around queer health care, I realized how much of an impact, like the lack of resources and trauma was having on the community that I had become a part of.”

Said her friend Daniel Stanton: “She wants to live in a community where everyone has access to the social determinants of health that they need to live their lives fully. And isn’t that really what most of us want?”

He added: “This is what makes her heart beat.”

American Girl is all about equality. So why did it partner with JK Rowling?