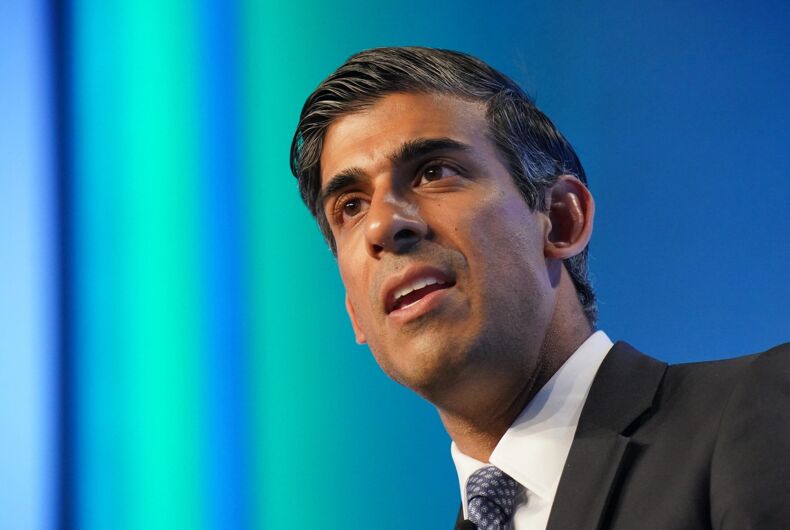 Rishi Sunak at a glance

Sunak is originally from the port city of Southampton in the county of Hampshire, and was born to African-born parents of Indian Punjabi descent.

Today, Rishi Sunak is worth an estimated $830 million, counting his and his wife’s wealth. In comparison, The Washington Post reported that Queen Elizabeth was worth about $420 million before her death.

A large portion of Sunak’s wealth comes from his wife, who owns a $791 million stake in her father’s multi-national IT company Infosys, The Guardian reported.

Sunak himself worked as an analyst for Goldman Sachs before joining a series of hedge funds, including the Children’s Investment Fund Management and Theleme Partners. According to The Sunday Times, he was a multi-millionaire in his mid-twenties.

With a better understanding of who Rishi Sunak is, read on to learn more about his relationship to and with the LGBTQ community.

No. He’s married to a woman. Rishi Sunak’s wife is fashion designer and venture capitalist Akshata Murty. Sunak and Murty have been married since 2009. They have two daughters: Anoushka and Krishna.

Conservatives have helped secure vital LGBTQ rights in the country, including marriage equality, the pardoning of gay sex convictions, LGBTQ-inclusive sex education, and eased blood donation restrictions for men who have sex with men. However, the party has also overseen a rise in transphobic speech and hate crimes while rejecting a conversion therapy ban and asylum cases for LGBTQ refugees.

Here’s where Rishi Sunak currently stands on a range of LGBTQ topics:

Transphobia seems unlikely to decrease under Sunak since he himself said that transgender women are not women during an August 25 Q&A. A former minister accused Sunak of “pandering to bigots” with his comments.

He has said that transgender people should be respected, but has also called gender-neutral language and trans-inclusive policies part of “recent trends to erase women,” echoing sentiments from transphobic British author JK Rowling. He has promised to release a “manifesto for women’s rights” that would call for banning trans women from women’s restrooms and sports, positions that’ll likely increase the public harassment and isolation of trans individuals.

Studies have shown that trans people are sent to conversion therapy in large numbers, even though the harmful pseudoscientific form of psychological torture has been disavowed by most major health associations. Despite this, the Conservative party has supported dropping trans people from a proposed national ban on conversion therapy, stating that a ban could have “unintended consequences.”

Some worry that teachers, parents, and therapists might be reluctant to work with children struggling with their gender identity if a trans-inclusive ban is passed, the BBC reported. However, others say that such a ban could allow counselors to “still help people fully explore their gender identity where appropriate” without using conversion therapy.

Sunak has previously said, “I don’t want anybody in Britain to have to hide who they are or who they love out of fear. I want this to be the safest and greatest country in the world to be LGBT+.” But it’s unclear what steps he might take to address the issue, as anti-LGBTQ hate crimes have risen exponentially in Britain.

Sunak hasn’t seemed to make any comments about LGBTQ refugees seeking asylum in Britain. But he has expressed support for a government plan to send any asylum seekers to Rwanda for processing and possible resettlement there or somewhere other than Britain.

Sunak has said that he supports efforts to end HIV transmission in the U.K. by 2030 by following the HIV Action Plan, a national proposal to instate widespread prevention, testing, treatment, and retention country-wide.

But when Sunak served as chancellor of the exchequer, his proposed budget for autumn 2021 contained no funding for the plan.

As we remember those we have lost, we also remind ourselves of the need for further action.

I'm proud of our policy to end new HIV transmissions by 2030, a commitment reaffirmed today at the HIV Commission launch pic.twitter.com/0BcAGyNrBW

“Rishi offered nothing to the LGBT+ community during his leadership campaign,” Tatchell told PinkNews. “I am not hopeful about any progress on banning conversion therapy or reform of the Gender Recognition Act under his premiership.”

Tatchell also noted that Sunak was elected by 100 Conservative party members in an undemocratic closed-door meeting rather than by British voters. As such, Sunak’s policy stances don’t reflect the people’s will, Tatchell argued.