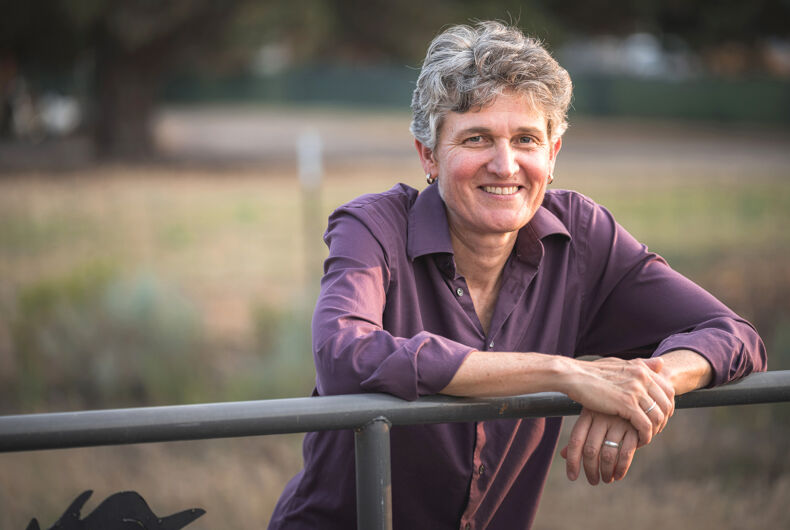 Out progressive Democrat Jamie McLeod-Skinner has a message for her Republican opponent: “Don’t sit on the sidelines and throw what we know are dog-whistle, DC talking points. Roll up your sleeves, show up, and help address the challenges we’re facing.”

McLeod-Skinner is running against Lori Chavez-DeRemer for the U.S. House in Oregon’s 5th District.

It is one of the few truly competitive House races in the country this election cycle. McLeod-Skinner is in the fight of her life to keep the district blue in the face of what could be a red wave overwhelming the Beaver State.

In the May primary, McLeod-Skinner swept seven-term Blue Dog Democrat Kurt Schrader out of office by 14 points, making him the first Democratic congressman to lose his seat in 2022. But the newly redrawn 5th shifted east from Oregon’s coast into more conservative rural areas, making it more competitive in the general.

Dems face a similar challenge in the governor’s race. Tina Kotek could be one of the first lesbians elected governor in the US. She is facing not only Republican opposition but also a well-funded nonaffiliated candidate, former Democratic state Sen. Betsy Johnson, who is draining resources (and likely votes) from Kotek, giving challenger Christine Drazan a shot at becoming the first Republican governor in Oregon in nearly 40 years.

In a remarkably unpredictable and democracy-defining election cycle, the state of the race earned a visit by President Biden last week to shore up support for Democrats in Oregon.

McLeod-Skinner comes from a background in both politics and public service.

After several years living in Tanzania and Kenya as a child, she earned a BS in Civil Engineering from Rensselaer Polytechnic Institute in New York and a Master’s in Regional Planning from Cornell, which she put to use as a reconstruction and program manager in war-torn Bosnia and Kosovo.

Those same skills helped her lead efforts in Talent, OR as interim city manager after a wildfire destroyed a large portion of the town in 2021. She’s led a Lutheran services organization and served on the Santa Clara, CA City Council. She also won the primary for Oregon’s 2nd District in 2018 by 19 points before losing to the 9-term Republican in the general election. She made a run for Oregon Secretary of State in 2020, coming in third in the primary. She lives with her wife and one of four children still at home, in rural Central Oregon.

Her opponent, Lori Chavez-DeRemer, earned a business degree and made her fortune with her husband building a medical services company, Anesthesia Associates Northwest. She got her start in politics in Happy Valley, a fast-growing suburb of Portland, as a member of the City Council and as Council president. She was elected to two terms as the Republican mayor, the first woman and Latina elected to the post. She was a delegate for Donald Trump at the Republican National Convention in 2016.

“It’s an interesting dynamic in this race, because I’m a rural Democrat running against a multimillionaire Republican who lives in the suburbs,” says McLeod-Skinner. “The geography has flipped.”

According to the Democrat, so has her opponent.

“She’s flip-flopped on her statements on abortion. She claimed she celebrated the overturning of Roe. She also said clearly, just a couple of months ago, that she would support legislation that would ban abortion at six weeks. But in recent interviews, even when TV reporters are holding up her own statements, she’s absolutely denied them,” says McLeod-Skinner. “So there’s a complete lack of trust in what she’s saying, and it does not bode well for other potential issues that might come up later.”

“I could not say more clearly my absolute commitment to protect those fundamental personal freedoms,” she says. “And that includes our rights in the LGBTQ community. We’ve worked so hard to get them and we do not want to go backwards. We will go forwards. And really, the vast majority of Americans, including Oregonians in my district, are supportive of our fundamental rights and our right to be married.”

Among the dog whistles McLeod-Skinner accuses her opponent of employing is her attention to “parents’ rights.”

“[It wouldn’t be part of her] job description if she won, but she said she’ll support a Parental Bill of Rights for Oregon. So what does that mean for LGBTQ kids and teachers and administrators in the state?” McLeod-Skinner asks.

“We’ve seen these attacks, especially on our trans kids. These are things that impact my family personally. I don’t talk much about my kids and my wife, just for their personal safety, because of the kind of foment that my opponent is dredging up. But we know what a Parents Bill of Rights means. It’s a dog whistle to her side, and it means our families are unsafe.”

Refuge for McLeod-Skinner, from the pressure and stresses of a campaign with national implications, is with her wife.

“She’s charming, she’s smart, she’s incredibly talented. I feel extremely fortunate to be married to her,” says McLeod-Skinner. She adds. laughing: “Whenever she and I show up at an event, people are always like, ‘Why isn’t she the one running?'”

Then, for the first time in an interview packed with policy positions and opposition research, McLeod-Skinner starts to get emotional.

“Those are the things that people outside see, but just, you know, on a personal level? We both believe very much in public service and in this work, and sometimes it can be exhausting, but – ” she takes a long pause to choke back tears – “my wife is my home.”