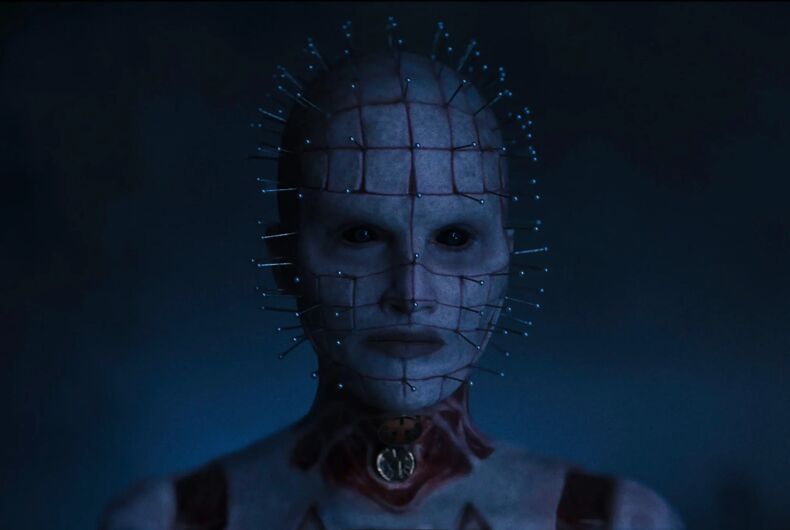 Spooky season is well underway, and networks and streaming platforms are rolling out their horror-laden line-ups of films and series. In addition to AMC’s very gay new take on Interview with the Vampire, Syfy’s second season of Chucky, and FX’s upcoming 11th season of American Horror Story, Hulu’s remake of classic 80s horror flick Hellraiser arrives this Friday.

The film is a new take on queer writer Clive Barker’s novella The Hellbound Heart and stars trans actress Jamie Clayton as a new version of the iconic Hell Priest, a.k.a. Pinhead. But it’s also apparently a significant departure from the 1987 film version, which Barker himself directed. According to its official synopsis, Hellraiser depicts a young woman named Riley (Odessa A’zion) who struggles with addiction and comes into possession of the puzzle box which summons Pinhead and the other demonic Cenobites.

Ahead of the film’s debut, here’s what critics are saying about the new Hellraiser.

The general consensus seems to be that, as reviewer Katie Rife writes for Polygon, “Barker’s kinky edge has been sanded down” in the new film directed by David Bruckner and written by The Night House screenwriters Ben Collins and Luke Piotrowski. The filmmakers are more interested in Cenobite lore. Rife praises the characters’ grotesque design as well as Clayton’s performance. “Of the five actors who have put their mark on the infernal bureaucrat colloquially known as Pinhead, Jamie Clayton is the only one besides Doug Bradley to really embrace “Pinhead” as a character.” Rife also called the film “very serious and adult, a welcome pivot from teen-centric slashers like Scream (2022) and Bodies Bodies Bodies.”

“Fans of Barker’s queer proclivities may be disappointed that this 2022 version marks another propagation rather than a return to its roots,” warns AV Club’s Leigh Monson. “The filmmakers may divide the franchise’s fans by choosing not to plumb the same sadomasochistic depths of the original film, but this new version is its own heart-wrenching descent into a different kind of hell, and it’s a worthy successor to the name Hellraiser that reinvents its iconography in a new era and context.”

IndieWire’s Jude Dry, however, thinks that the Hellraiser franchise’s legions of fans will delight in this 11th installment regardless of its shortcomings. Still, Dry writes that the new film is scrubbed of the original’s “kinky perversion,” leaving a relatively sanitized horror spectacle. “Hellraiser is a 2022 rebirth for the franchise, free of all the sexy subversion that got it here in the first place. It’s perfectly entertaining, using Barker’s inventive tropes to tell a solidly gory nightmare, but it’s a pale vanilla shadow of the original.”

Noting, as other reviewers have, that the film is being released by Disney, which owns Hulu, Variety’s Owen Gleiberman writes that “Hellraiser, for most of its two-hour running time, actually does feel kind of like a Disney movie.” The characters, he writes, “possess none of the hidden edges or curlicues of the characters in, say, Bodies Bodies Bodies. They’re youth-movie ciphers with almost no intrinsic interest; they’re as colorless as the characters in a Scooby-Doo film.” The film, Gleiberman concludes, “works…as flesh-annihilating spectacle. Yet it doesn’t quite work as a story.”

“The movie starts promising enough, but by the third act, tricks, tropes and story issues pile on, and become too much to bear,” writes Deadline’s Valerie Complex, who also praised Clayton and the film’s overall design as some of Hellraiser’s redeeming qualities. “Hellraiser 2022 is a lackluster attempt to revive a stagnant franchise. The story is prime to be pushed to its limits, but the script chooses to stay in the safe zone.”