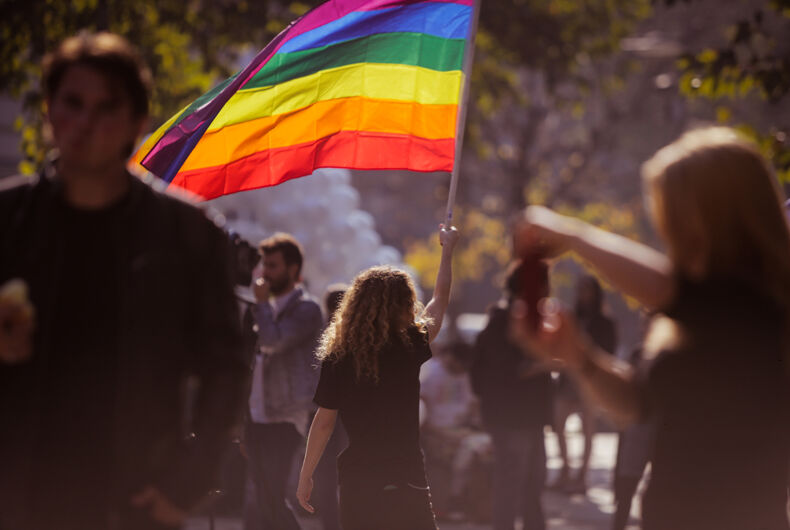 Thousands of Serbians took to the streets on Sunday in the country’s capital, Belgrade, to protest a week-long LGBTQ Pride event that was scheduled to take place this week.

The protest was reportedly led by the Serbian Orthodox Church and featured anti-Western slogans, Russian flags, and portraits of Russian President Vladimir Putin. Though the country is seeking membership in the European Union, it remains a Russian ally.

Patriarch Porfirije, the head the Serbian Orthodox Church, delivered a sermon saying that the organizers of the pan-European EuroPride event “want to desecrate the sanctity of marriage and the family and impose an unnatural union as a substitute for marriage,” according to Reuters.

Serbia’s president, Aleksandar Vucic, acknowledged that there have been threats against the EuroPride events, but said that it was up to police to cancel. On Sunday, the Associated Press reported that the LGBTQ Pride gathering had been banned. U.S. Secretary of State Antony Blinken has reportedly called on the Serbian government to reverse this ban on the events.

“EuroPride is not cancelled, and will not be cancelled,” Kristine Garina, president of the European Pride Organizers Association said, according to Gay Times. “During the bidding process for EuroPride 2022, prime minister of Serbia Ana Brnabic promised the full support of the Serbian government for EuroPride in Belgrade, and we expect that promise to be honoured.”

#EuroPride2022 takes place in Belgrade, Serbia, from 12-18 September. Serbia's leadership @avucic and @SerbianPM can support the event or they can oppose. But they can't hold back progress. See you @belgradepride! pic.twitter.com/V3c6Xyi3ty

A similar protest occurred last month. At the time, Vucic said that EuroPride would be postponed or scrapped altogether due to threats from right-wing “hooligans” and ongoing issues related to the country’s dispute with Kosovo and the European energy crisis.

Last week, Nikola Brkljač, one of the coordinators for Belgrade Pride, which is sponsoring EuroPride, said it would definitely not be canceled. “Vucic cannot ban an event of which he is not the organizer,” Brkljač told LGBTQ Nation.

According to the official EuroPride 2022 website, Belgrade would be the first city in Southeastern Europe and the first city outside the European Economic Area to host a major event for the pan-European LGBTQ community. “In the Western Balkans, the LGBTI+ community faces deep inequality and discrimination. EuroPride in Belgrade is a turning point in the region, validating the efforts of LGBTI+ activists to achieve equality and empowering them to continue the fight,” the statement reads.