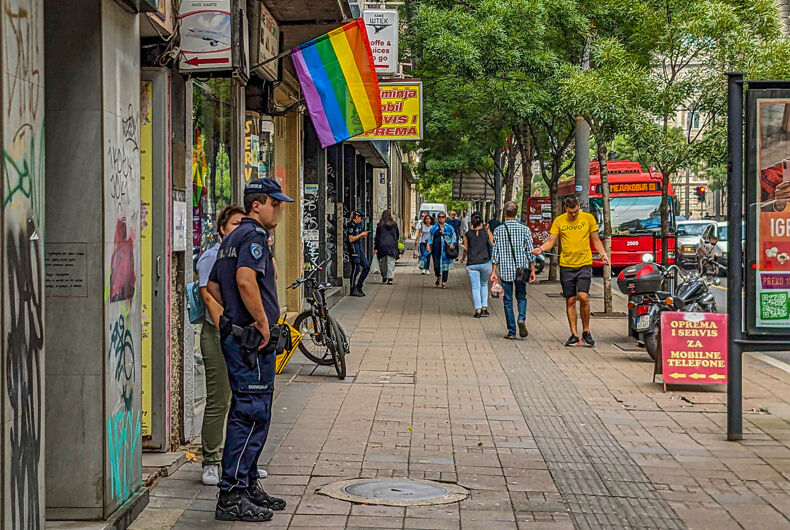 EuroPride, a pan-European Pride festival that takes place in a different city every year, is scheduled to take place in Belgrade, Serbia, from September 12 – 18. But plenty of locals, including the country’s president, want to keep it from happening.

On August 14, thousands of religious and nationalist protestors marched through the streets of downtown Belgrade, carrying anti-LGBTQ banners and chanting slogans such as, “We don’t want a gay parade,” and “Keep your hands off our children.”

Serbian President Aleksandar Vučić announced at a press conference that EuroPride would be canceled, saying that “at this moment, the state is pressured by numerous problems,” adding that EuroPride could possibly be held during “happier times.”

But Nikola Brkljač, one of the coordinators for Belgrade Pride, which is sponsoring EuroPride, said it would definitely not be canceled.

“Vučić cannot ban an event of which he is not the organizer,” Brkljač told LGBTQ Nation.

Brkljač knows perfectly well that Serbia isn’t the most LGBTQ-friendly country in the world. Since 2018, the Belgrade Pride Info Center has been attacked or seriously vandalized at least 15 times.

Indeed, in 2019, an anti-gay group of seven people tried to break into the center, threatening a coordinator. And despite many of these events being caught on videotape, the city’s police department has never seriously investigated any of them.

These 15 events also don’t include slightly less serious actions like people coming into the Center and shouting homophobic slurs, or vandals spray-painting and damaging the Center’s exterior.

Working with local police, the center has managed to establish a measure of protection. When the center is open, a police officer is now always stationed inside, along with several more on the street outside.

Despite all the hostility toward LGBTQ people, Brkljač was still surprised by how many Serbians turned out for the August 14 march.

In fact, Belgrade Pride has taken place without major incidence every year since 2014 (except in 2020 when it was canceled due to COVID).

Brkljač thinks the president’s comments were simply a performative attempt to please both sides.

“If religious and anti-Pride hear that Pride is being canceled, they’ll be happy and support that decision,” he said. “And the people who want to march will still parade anyway.”

The city police can still deem the event “unsafe,” Brkljač said, which would lead to an official ban on the event. But even then Belgrade Pride will not be dissuaded.

“We’ll still be protesting whether or not they declare our event unsafe,” he said, calmly but firmly.

Violence has erupted at Belgrade Pride events before. Serbian activists first attempted a Pride event in 2001, but threats of violence forced its cancellation. In 2010, when organizers finally put on the country’s first actual Pride event, 100 people were injured — a tragedy that kept Pride from happening again until 2014.

Is Brkljač worried violence could happen this year too?

“I’m not worried about it because I will stand up to it,” he said. “I feel like it’s my duty as someone who works with the community six days a week to oppose any threats.

“We have our own security that’s going to be securing the parade,” he added. “But it’ll be really shameful for Serbia in 2022 to say that they cannot guarantee safety for a public gathering.”

Giorgi Tabagari, co-founder of Tbilisi Pride in the Republic of Georgia, knows first-hand about harassment by religious activists and dealing with a hostile government unwilling to protect its LGBTQ citizens. Over the years, Tabagari has been chased by a homophobic mob, dealt with attacks on the offices of Tbilisi Pride, and been forced to cancel Pride due to threats of violence.

Tabagari, who already planned on attending EuroPride, is now more determined than ever to participate.

“Now it is way more political and important to be there to support the parade organizers,” he told LGBTQ Nation. “Coming from Tbilisi, and the experience I went through the past three or four years, make me way more related to the struggles the organizers are going through.”

As for Vučić trying to cancel EuroPride, Tabagari noted the Serbian government has no right to do that.

“Moreover, they should be doing their best to make sure that everyone is safe,” he said. “If Serbia is still committed to the idea of acceding to the European Union, then they should do their best to ensure the protection of the Pride events.”

Why the sudden rise in violent opposition to an event that has been happening peacefully for the past six years?

Brkljač thinks it’s the intersection of several things, including the fact that hosting EuroPride has brought even more attention to the topic of LGBTQ rights in Serbia. He even thinks events in Ukraine might be related.

“There are a lot of right-wing extremists who are siding with Russia during the current conflict,” he said. “So that may also be a reason because there is a growing number of people who are connecting with the values of the right-wing party, which is also very anti-Pride.”

That said, the majority of the opposition is coming from religious groups, he said, who claim to be protecting family values and saving their children.

But Brkljač said, “We are your children. I am someone’s child. I have volunteers who are helping me run this [center] who called me the night of the protest and said, ‘My parents are forcing me to come to this anti-Pride protest.’”

Brkljač is even more forceful when it comes to the topic of family values.

“If their family values are so fragile that one day of LGBTI people marching on the streets is going to cause a problem for it, then there’s something wrong with those values.”