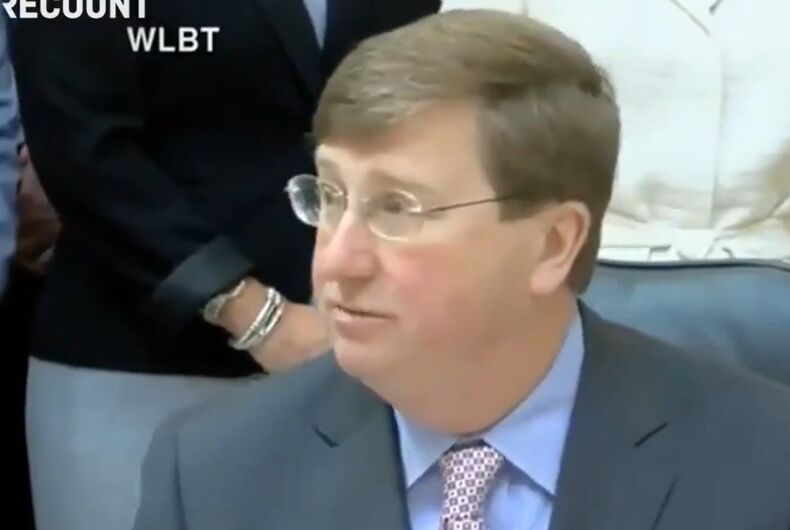 Republicans have all but given up on the job of governing. If governors spent as much time ensuring their states’ infrastructures were in good shape as they do demonizing LGBTQ people, the South would be the envy of the nation. Instead, we get disasters, like the one unfolding in Mississippi.

There, the state’s capital is without water for the foreseeable future because of decades of failure to address the crumbling water system. Heavy rains flooded the city’s sewage treatment plant, overwhelming it. As a result, the city’s 150,000 residents don’t have water to drink, bathe or flush their toilets.

It’s not as if there wasn’t plenty of warning. Last year, the system failed for a month following a winter storm. Residents have complained for years about brackish water and low water pressure. Meanwhile, due to white flight, the city has seen its tax base shrink by 20% since the 1980s, leaving it without the money it needs to fix the system.

The state knows about the problem. After all, it’s literally in the capital’s backyard. But the Republicans who run the state have bigger issues to deal with. Like attacking LGBTQ people.

Fighting the culture war doesn’t leave Reeves much time for anything else apparently. But when opportunities came up to help the people of Jackson–the majority of whom are black–he refused. In 2020, he vetoed bipartisan legislation to help residents with overdue water bills, which would have provided much-needed money to the city. Reeves complained the bill would send a message “that individuals are not responsible for paying their water bill.”

At the same time, Reeves had no problem ensuring the state was not investing in its citizens. This year he happily signed into law the state’s largest income tax cut ever. The tax cut means even less money for services–like replacing failing infrastructure–and will most benefit the state’s richest citizens.

If this sounds familiar, it’s because Reeves is following the example of another anti-LGBTQ governor. Gov. Greg Abbott (R-TX) presided over the collapse of the state’s electrical power grid last year. Millions of Texans were left without lights, heat, and shelter following a winter storm, and then were hit with outrageously high bills. Abbott has yet to grapple with that problem, claiming that the power grid is in great shape, even as utilities warn customers to limit use during hot weather.

But Abbott has been moving full steam ahead with his attacks on LGBTQ people, especially trans youth and their parents. If he spent nearly as much energy on fixing the real problems of the state instead of ruining people’s lives, Texas would be in terrific shape. The same would be true for Mississippi. But both Abbott and Reeves–and their fellow Republicans–are more intent on scoring points against their citizens than actually improving their lives.

Belgrade Pride vows EuroPride will happen despite threats of violence