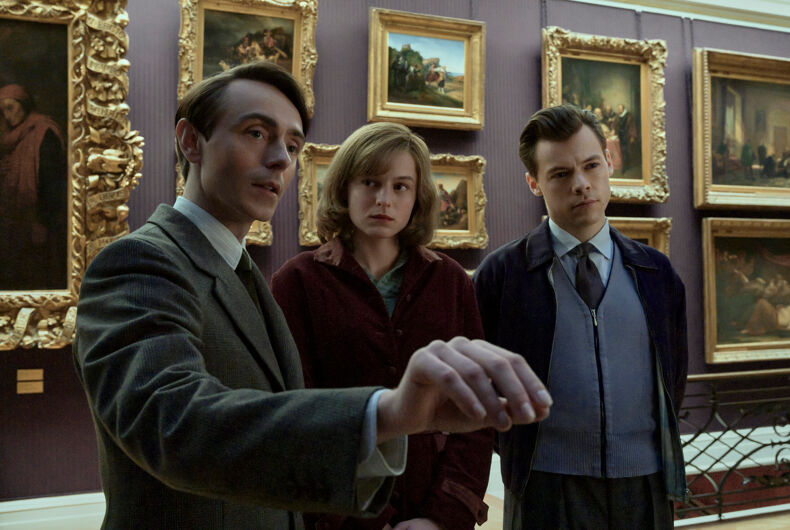 My Policeman—a.k.a. the other Harry Styles film making the festival rounds—premiered at the Toronto International Film Festival recently, preceded by the film’s first official trailer and significantly less drama than Don’t Worry Darling.

The film, based on Bethan Roberts’s 2012 novel, centers on a love triangle in 1950s England. Styles stars as a gay cop who becomes the object of desire of both schoolteacher Marion (Emma Corrin) and her museum curator husband Patrick (David Dawson).

Ahead of the film’s October 21 release in theaters—followed by a streaming premiere on Prime Video on November 4—here’s what critics are already saying about My Policeman.

Here’s the bad news: the film has a mere 44 percent score on Rotten Tomatoes at the moment, based on 27 reviews from critics.

“If sad characters looking out windows near a gray seaside while memories of the past come rushing in like the tide is your kind of thing, you could do a little bit worse than My Policeman,” writes Vanity Fair’s Richard Lawson. “My Policeman is studied and plodding in its period-piece solemnity, a dirge of a movie about reckless people that is never warmed by their implied inner fire.”

“Plodding” seems to be a common refrain in these early reviews. That’s how the UK’s The Times critic Tom Charity describes the film as well, though he praised Styles as “charismatic and swooningly handsome.”

RogerEbert.com’s Robert Daniels gave the film all of 1.5 stars, declaring it “soulless” and questioning Styles’s leading man chops. “Here, Styles’ inexperience as a leading man in a weepy British queer period piece is glaring,” he writes. Corrin doesn’t fare much better: “She tussles with the least developed character of the bunch, but much like Styles, never proves herself as a lead. How can a movie with this much youthful talent be so breathlessly boring?”

The Daily Beast’s Nick Schager worries that My Policeman will renew accusations of “queerbaiting” aimed at Styles. “A cynical viewer could easily read My Policeman as the second half of a one-two heterosexual-homosexual cinematic punch for Styles, designed to let him continue straddling the gender lines he fluidly blurs in his own public persona,” he writes. “No matter the star’s intentions, though, [director Michael] Grandage’s film is a rickety vehicle that does exactly what Billy Eichner and Nicholas Stoller’s Bros mocks: imagining a gay love story in old-fashioned and exaggerated tragic terms.”

Peter Debruge of Variety was kinder, comparing My Policeman favorably to “those slightly stuffy yet respectable period pieces of the kind that Ismail Merchant and James Ivory have made of [E.M.] Forster’s novels.” Debruge writes that the sections of the film set in the 1990s—which cast Rupert Everette, Linus Roache, and Gina McKee as older versions of the characters—slow the film down, but that it “comes alive during its 1950s-set segments” starring Styles and Corrin.

Man murdered co-worker over gay rumors. Now Alabama is set to execute him.