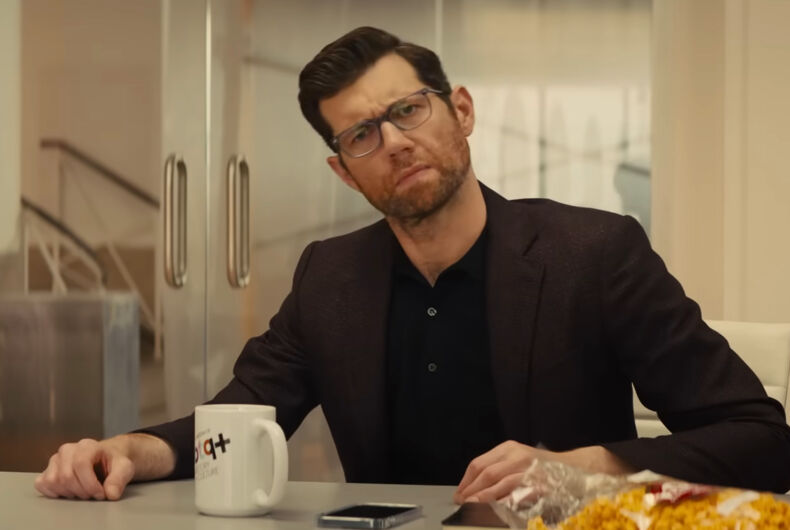 Billy Eichner’s highly anticipated gay rom-com Bros premiered at the Toronto International Film Festival last week, and early reviews have started to make their way onto the internet. Ahead of the film’s theatrical release on September 30, much has been made of its historic nature. It’s apparently the first major studio gay rom-com to feature actual gay actors and get a theatrical release—something Eichner himself is particularly proud of.

So, what do the critics have to say about Bros?

The Guardian’s Benjamin Lee gave the film four out of five stars, calling it “a winner.” He praised Eichner and co-writer/director Nicholas Stoller’s handling of a film freighted with so much expectation, as well as Eichner’s performance.

Bros, he wrote, is “big and clever in a way that so few films of this scale are these days – a pleasure to be shepherded through the easy motions of a romantic comedy by people who know what they’re doing for once, and manages to walk a difficult tightrope without falling, despite the heft of baggage. It might not be The Gay Film We Need Right Now (is anything worthy of that title?) but it’ll be one that many of us will want instead.”

Writing for IndieWire, reviewer Ryan Lattanzio called the film “a snarky, fitfully raunchy meet-cute for the age of Grindr.”

“Eichner’s gay homage to the great American romcoms of yesterday looks and feels exactly like them, and that’s groundbreaking enough,” Lattanzio writes. “We’ll take that any day over a movie that tries too hard to pander to gay audiences. This one just hears and sees us.”

Most early reviews have noted the film’s self-conscious references to classic romantic comedies, particularly those of the late Nora Ephron, while using the specificity of the cis white gay male perspective to deconstruct their tropes.

“While Bros has sort of been marketed as an almost satire of rom-coms, Bros is decidedly a fairly straight-forward rom-com,” wrote Collider’s Ross Bonaime, “but as [Eichner’s character] Bobby says early on, gay romance isn’t the same as straight romance. Love is love is love is actually bullshit, and Bros does a great job of showing how queer relationships can be fundamentally different from the heteronormative relationships we see in the movies.”

On the other hand, writes RogerEbert.com’s Marya E. Gates, the film’s “perpetual commentary on the mainstreaming of queerness remains at odds with its very desire to tell its story within the Hollywood system.” While others praised the inclusion of so many diverse queer characters in Bros, Gates found most of those characters “underdeveloped.” Still, she writes, “Eichner’s razor-sharp wit and caustic humor shines through in the dialogue and situational comedy as he skewers many aspects of gay dating culture, from Grindr hookups to obsessive gym usage to group sex.”

On the less favorable end of the spectrum, while not exactly panning the film, Variety’s Peter Debruge seemed far less enamored of Eichner and the entire project.

In his somewhat less barbed review, The Hollywood Reporter’s John Defore called Bros “funny, sweet and occasionally pointed,” but concluded that in aiming to deliver a decidedly mainstream rom-com, Eichner and co. have made a film that is “good enough to make you wish it were better.”