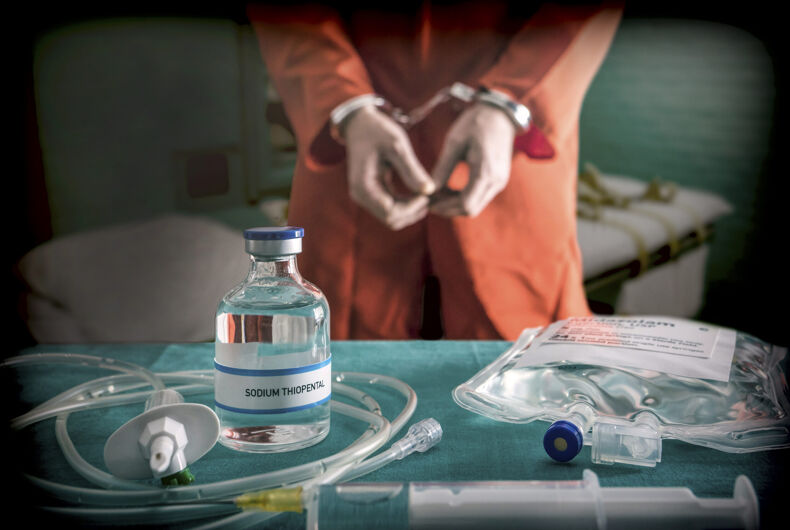 The state of Alabama is asking a federal appeals court to allow the lethal injection of Alan Miller, a man who shot three men to death in 1999. Miller believed that at least one of them men had spread rumors about him being gay.

On the morning August 5, 1999, Miller, a former truck driver, walked into Ferguson Enterprises, a heating and air-conditioning firm. There, he shot 32-year-old Lee Holdbrooks and 28-year-old Scott Yancy. Miller reportedly envied Holdbrooks for receiving better and longer trucking routes than he did.

Miller then drove to Post Airgas, a gas firm that had laid him off eight months prior. There, he shot 39-year-old supervisor and assistant manager Terry Jarvis to death.

A witness said that, before shooting Jarvis, Miller yelled at him, “I’m tired of your rumors about me.” In court, it was revealed that Miller suspected Jarvis of telling others that he was gay. Miller was unmarried and living with his mother at the time of the murders.

It’s not uncommon for men to be harassed at work for their sexuality. The Equal Employment Opportunity Commission (EEOC) said that one-fifth of the sexual harassment claims it receives are filed by men. Researchers say that men are harassed more often by other men than by women, The Washington Post reported.

Coworkers at both offices contacted police. Police arrested Miller shortly after a brief car pursuit on a nearby interstate highway. Miller reportedly scuffled with officers before police found a handgun in his car. The gun’s bullets matched the casings found at the murder scenes.

When Miller’s case went to trial, he pleaded not guilty by reason of insanity. His defense attorneys didn’t try and prove his innocence. Instead, they argued that Miller should be in a mental health facility rather than a prison.

Miller’s execution was initially scheduled for September 22, but it was delayed after he requested not to be executed by lethal injection due to his fear of needles.

It’s now possible that Miller may be executed using nitrogen hypoxia, an experimental method that kills people by having them breathe pure nitrogen, filling their lungs but depriving them of oxygen, causing them to lose consciousness and die.

However, Alabama has never tried such a method before. State officials worry that if the method for forcing an inmate to inhale the gas doesn’t work, then it could violate the Eighth Amendment’s ban against cruel and unusual punishment, Oklahoma Watch reported.