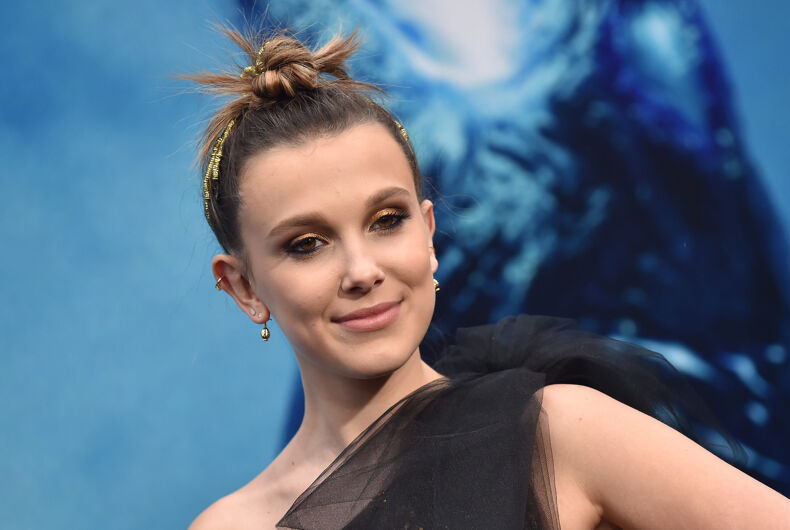 Millie Bobby Brown arrives for the 'Godzilla: King of the Monstersl' Hollywood Premiere on May 18, 2019 in Hollywood, CAPhoto: Shutterstock

While scrolling through your social media accounts, chances are you’ve seen some offensive posts featuring Stranger Things actress Millie Bobby Brown. Typically, these posts include photos with some unbelievably homophobic captions or stories.

These posts are so absurd that they’re clearly made up, but one has to wonder: who thought it would be funny to make a meme saying Brown is homophobic? Where did it start, and how has Brown reacted to this meme? Read on to find out more about Millie Bobby Brown and this meme’s origins.

Who Is Millie Bobby Brown?

Millie Bobby Brown is a British actress and model best known for playing Eleven, one of the main characters and protagonists of the Netflix show Stranger Things. Her performance in the sci-fi horror series earned her multiple nominations at the Primetime Emmy Awards and Screen Actors Guild Awards.

Brown made her silver screen debut in 2019’s Godzilla: King of the Monsters as Madison Russel – a role she reprised in 2021’s Godzilla vs. Kong. Her biggest film role to date has been in 2020’s Enola Holmes, adapted from The Enola Holmes Mysteries. Brown produced the film and portrayed the main character, Enola Holmes

Recently, Brown wrapped up filming Enola Holmes 2 and has received critical praise for her acting in the fourth season of Stranger Things. She also has several projects in the works. Currently, she’s set to produce and star in the movie adaptation of the thriller novel The Girls I’ve Been. She was also announced as the lead of the Russo Brothers’ adaptation of the graphic novel The Electric State.

The “Millie Bobby Brown Is Homophobic” Meme Started With Trolls

The mistaken belief that Brown is homophobic stems from a series of meme tweets going back to 2017. In November 2017, Twitter user Kelsfiona tweeted a fake, ridiculous story about meeting the actress at an airport. In the story, Kelsfiona claimed Brown “aggressively pulled off” her hijab and “stamped on it”.

Kelsfiona has since been suspended from Twitter, but the story went viral and clearly inspired a similar implausible tweet by Twitter user Oddlypop. Oddlypop wrote, “it’s time to share my story. one day i saw millie bobby brown in the mall and i asked for a selfie and she said ‘i don’t take selfies with fags, homo sex is sin’ and broke my iphone X. i couldn’t stop crying i’m so ashamed #TakeDownMillieBobbyBrown”

Oddlypop’s tweet led to the rise of the “Millie Bobby Brown is homophobic” meme, where other users would tweet fake stories of Brown being homophobic. These stories would often have the cruel hashtag #TakeDownMillieBobbyBrown accompanying them. Other users made doctored versions of Brown’s Snapchat posts with fake homophobic captions.

Some people have argued that these memes are just harmless fun because they’re “clearly fake”, and that this is part of why it’s funny. Incredible absurdity is one facet of humor, and it is admittedly quite absurd for a meme to portray a harmless young girl as a potty-mouthed raging bigot.

However, critics have pointed out that this meme uses homophobic language in a crude, insulting way and hardly feels like “reclaiming slurs”. It’s also raised serious questions about whether it’s possible to reclaim these slurs at all and how empowering this can be when it comes at the expense of bullying a teenager.

The harassment from the meme’s contributors and the people who believed these memes was too much for Millie Bobby Brown. At the time, she was just 14 years old, and the online bullying pushed her to quit Twitter.

Brown made a post on Instagram for her 16th birthday on February 19, 2020, where she vented her frustration with her experiences on social media platforms. She wrote in the post’s caption: “…there are moments i get frustrated from the inaccuracy, inappropriate comments, sexualization, and unnecessary insults that ultimately have resulted in pain and insecurity for me.”

The caption accompanied a video featuring cruel headlines about the Stranger Things actress, including criticism about her “adult style”, how fame had allegedly gone to her head, and how she had to leave Twitter. Brown ended the post on a hopeful, confident note, saying “I’ll always find a way to smile.”

Brown hasn’t returned to Twitter, save for a lone tweet in 2019 that simply said “hi. i missed u.” In a cover story for Allure, Brown opened up about why she’s retreated from social media.

Brown attributes her healing to stepping back from online vitriol and focusing on herself. She elaborated in the same interview, “It helped to be able to understand that I don’t need to be anything they said that I need to be. I just have to develop within myself. That’s what I did.”

Sadly, the anti-gay memes get revived online whenever Brown has a new project or when Stranger Things updates are announced. It’s fantastic that Brown has been able to move forward from the controversy, but this continuing social media circus is a sobering glimpse at the pervasiveness of cyberbullying.

Millie Bobby Brown has never expressed homophobic sentiments on her social media accounts. However, the fake tweets and posts from trolls have misled some people into thinking that she’s homophobic.

The meme may have gotten some laughs from people, but the humor hardly feels worth it when it leads to a young girl being bullied off social media. It’s time to stop excusing cruelty as “edgy” or “dark” humor and to start calling out people who engage in online harassment.

Man dies after getting beaten at Pride event