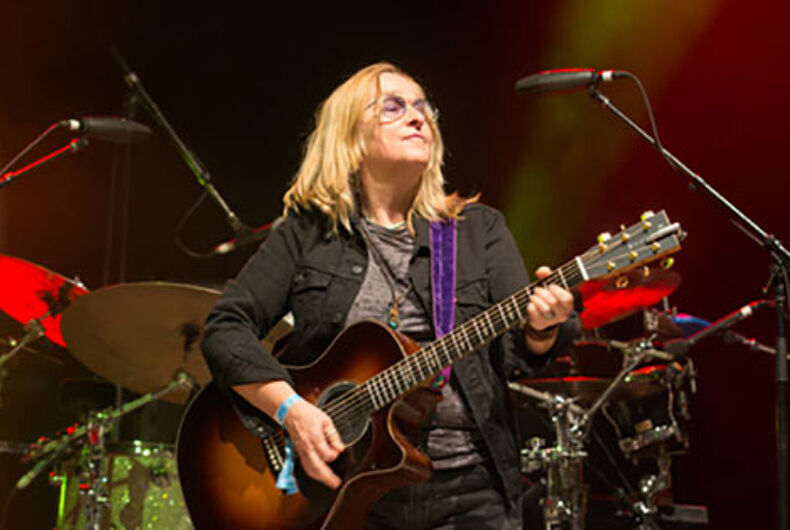 Lesbian music artist Melissa Etheridge said the revolutionary Showtime series, The L Word, was based on pool parties she threw in the late eighties and early nineties with her queer celebrity friends, including Ellen DeGeneres, Rosie O’Donnell, and k.d. lang.

“The L Word was written about all that happened!” Etheridge told The Daily Beast. “I knew Ilene Chaiken [who created the show]. She was part of that group. She was very, very much inspired by all of us. I stopped watching The L Word because I lived it!”

Etheridge said her backyard “was just an open house constantly” with “a lot of drinking, a lot of cannabis-smoking, and a whole lot of fun.”

“None of us back then had kids. That’s why we could get together as often as we did, and we weren’t as famous, so we had more time to hang out.”

Etheridge said O’Donnell, Lang, and DeGeneres were “like my brothers” and that she never had a romantic relationship with any of them.

She also said many celebrities came to her for advice on coming out.

“They would always come and confess. I had people come to me and say, ‘I see you being out,’ and they would apologize to me because they were not out. I would say, ‘Look, it’s very personal. It’s totally up to you, you don’t have to explain anything to me.’ There were a lot, and some have since come out.”

“It’s been wonderful to see all these people finally come into themselves,” she added. “The ones who come out do much better than the ones who don’t, or didn’t.”

Etheridge said she knows of some celebrities who have stayed in the closet.

“I would never out anyone. But to me, it just solidifies and tells me how good it is to come out, because one can see the difference between their lives and those of us who have come out and our happiness. Ultimately, your fame, success, and career are not going to keep you happy when you’re old.”

“Personally, being gay was never an issue for me,” she said. “I was just always, definitely attracted to women. I always knew I was gay. I didn’t know what that would look like in the world, but I knew what I was and that it made me happy. When I first signed to a record company, I said, ‘Look, I’m not going to pretend I’m not gay.’ They told me they didn’t want me to ‘flag wave.’ That’s what they said to me, whatever that means. Four years later, I would be flag-waving.”

Etheridge hated hiding who she was and finally decided to be as out and proud as possible.

“It was really something that my partners and I knew, and each time we were invited somewhere, like some sort of premiere, we would always make sure to hold hands to say, ‘This is my partner. Here are two beautiful, successful women hanging out with everyone else.’ It was really important. If you had asked me back then, I would have said that in the future I would hope this was not a big deal and that my children would not know a world where it was crazy or scandalous to be seen with a woman.”

And she added a message to today’s leaders pushing anti-LGBTQ legislation across the country: “When you define yourself by what you are against, ultimately people will see you are not for anything. And there is a generation coming up behind us that thinks we are all very foolish. I have children. I meet their friends. Their generation are going to look back on this just like how we looked back on the horrible bigotry of the 1950s and 1960s. To all of those politicians, I would say that your legacy is not going to be a revered one.”