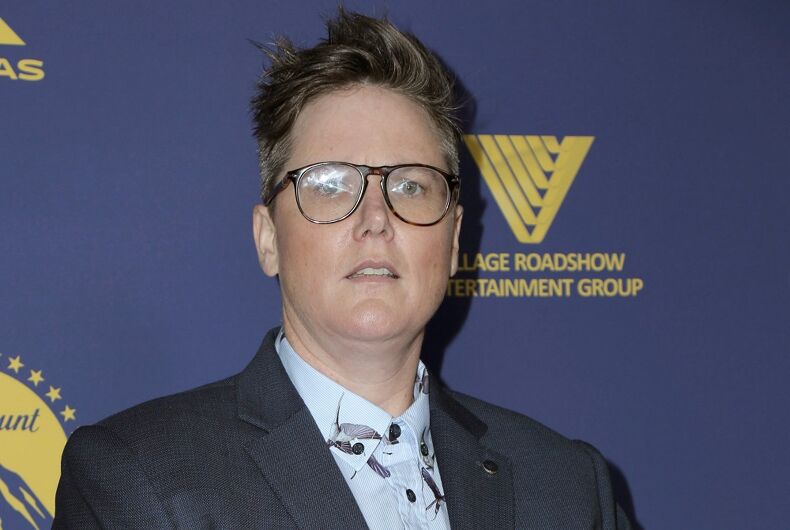 Hannah Gadsby, the outspoken comedian who had words for Netflix chief Ted Sarandos last year concerning Dave Chappelle and his transphobic special, has entered a new multi-title deal with the streaming platform. And she’s using that deal to promote other gender-diverse comedians.

First up is a show taped at the Sydney Opera House as part of her Body of Work tour, to air in 2023. The new special follows universally acclaimed Nanette in 2018 and Douglas from 2020, both Netflix projects.

Gadsby was on the front lines protesting Dave Chapelle’s controversial The Closer stand-up special, which premiered on Netflix in October last year and inspired a walkout and attendant protest, helicopters circling, at the Netflix’s Hollywood headquarters. Chapelle has called himself “team Terf” and The Closer was widely panned as transphobic.

At the height of the controversy, CEO Sarandos sent a memo to Netflix employees using Gadsby as an example of the diverse points of view Netflix airs.

“We are working hard to ensure marginalized communities aren’t defined by a single story. So we have Sex Education, Orange is the New Black, Control Z, Hannah Gadsby and Dave Chappelle all on Netflix. Key to this is increasing diversity on the content team itself.”

Gadsby wasn’t having it.

“Hey Ted Sarandos!” the Australian posted on Instagram. “Just a quick note to let you know that I would prefer if you didn’t drag my name into your mess. Now I have to deal with even more of the hate and anger that Dave Chappelle’s fans like to unleash on me every time Dave gets 20 million dollars to process his emotionally stunted partial world view.”

“You didn’t pay me nearly enough to deal with the real world consequences of the hate speech dog whistling you refuse to acknowledge, Ted,” the post continued. “Fuck you and your amoral algorithm cult … I do shits with more backbone than you. That’s just a joke! I definitely didn’t cross a line because there isn’t one.”

In addition to the Body of Work show, Gadsby is slated to host and produce a multi-comic special featuring gender-diverse comedians.

“In an effort to further open a door that I had to fight to get through myself, I will curate and host a line-up show on Netflix featuring six new, gender-diverse comedians,” Gadsby said. “In a notoriously transphobic industry, I am looking to broaden the scope of opportunities for genderqueer performers from around the globe, as well as expand the diversity of offerings to audiences on one of comedy’s biggest platforms.”

“Coupled with a mentorship initiative for these up-and-coming comics, the program aims to foster the professional development of a demographic that is still struggling to have their voices heard. Recorded in a single run in the U.K. in 2023, this will be a chance for the world to hear these voices for the first, but definitely not the last, time.”