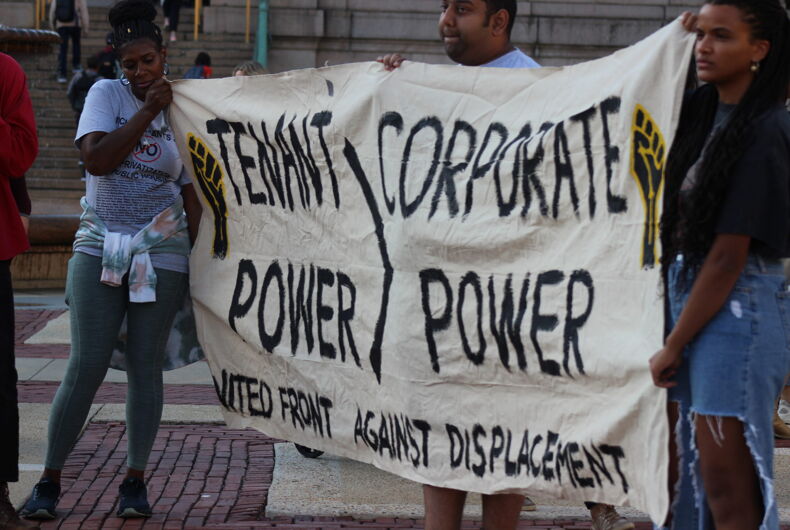 Last Thursday activists, residents and students protested Columbia University’s aggressive expansion into Harlem in Manhattan, New York outside the university steps. The neighborhood is integral to the Black, Latinx, and LGBTQ culture we honor today. The protest, organized by The United Front Against Displacement (UFAD), a tenant organization fighting gentrification throughout US cities, criticized the university’s partnership with the city to continue the privatization of the New York Housing Authority (NYCHA) and the national war on housing in general.

NYC’s reality is common among the country’s 50 largest cities, which the U.S Department of Housing and Urban Development’s latest Annual Homeless Assessment Report states, make up more than half of all people experiencing sheltered homelessness in 2021.

Housing prices and rent increases disproportionately affect BIPOC and LGBTQ people as they’re four times more likely to be in public housing. Housing access is related to deliberate policy choices and underfunding that’s persisted for decades, but has worsened since the Great Recession.

UFAD protesters didn’t deliberately go into who is affected by homelessness, but they did set a list of demands for those partially responsible. Compliance with these demands, in particular inflation-matched pay for university employees, is a small step toward restoring these “gross injustices”, said the UFAD in an Instagram post.

Ryan Costello, an organizer for UFAD, says that Harlem apartments are filled with asbestos, human feces, and broken elevators. Columbia University brags about how much money they’ve made, while they, along with NYCHA, neglect public housing, says Costello. The university raked in nearly $25 billion in net assets in 2021, exceding 2020’s profits by about 15%, despite a global pandemic and rising poverty rates.

“In the long term, my hope really is that we can do something collectively to amend this whole system of injustice. We have a whole series of injustice all together because the elite who are running this country—whether it be Republican or Democrat—have an agenda that is pretty similar in the sense of enriching the few at the expense of the many perpetuating various systems of oppression,” Costello said to LGBTQ Nation.

Nevertheless, Harlem reminds America of what resilience against adversity, homelessness, and injustice looks like. The 70s and 80s gave rise to the Ballroom scene as a new world for homeless trans and queer children to thrive in. The shared homes of royal house mothers and fathers informed culture, joy, and quality of life for all people despite the illegality of balls, drag, and living openly as an LGBTQ person in general.

Today, LGBTQ youth is estimated to be 40% of NYC’s homeless youth. For West Harlem City Councilwoman Kristin Richardson Jordan, an out lesbian, the housing crisis in Harlem threatens the safety of LGBTQ youth seeking homeless shelters as well as hundreds of multi-generational Black and Brown families that have lived in Harlem for decades.

“Developers are entering our community with no accountability for the existing surrounding areas or their socioeconomic impact,” the socialist democrat told LGBTQ Nation.

She adds that developers are doing the bare minimum of affordable units based on Area Median Income (AMI). AMI affects communities throughout the country by skewing the reality of income for most families once high incomes are integrated into the median income adjustment.

For example, when assessed, Harlem’s AMI is $93,400 per year. However, a majority of Harlem families actually make about $37,000 to $57,000, says Jordan. New Jersey uses a similar system. Yet, the state is one of the most expensive states to rent in.

Regardless, those that have maintained their homes in Harlem plan to keep them.

Veronica Hickman, a multi-generational West Harlem resident and UFAD organizer, sat on the university steps looking out onto the protest. She said she needed to rest after singing “We Shall Overcome” to protesters. She comes when she can because Costello comes out for Harlem.

“I feel like he’s supporting us, and you know what, if the money isn’t supporting you, you need to do your part. Even if it’s just showing up and doing a song or something, you know, that’s what I need to do,” she said.

The Harlem gentrification project is almost 20 years old. Renzo Piano, a famous Italian architect, announced his plans to former Columbia University President Lee Bollinger in 2003 to “revitalize” West Harlem with what is called The Manhattanville Project: a 17-acre expansion of the university’s business school overlooking the Hudson River. The ivy-league school owned 65% of the neighborhood at this time.

But Columbia University is one of many corporations buying American neighborhoods today. Thirty-three percent of all homes in America were purchased by investors by 2022, according to John Burns Real Estate Consulting. This leaves BIPOC and LGBTQ communities to compete against investors with a wage gap ranging 10-70% lower than the average non-LGBTQ worker, reported the Human Rights Campaign earlier this year.

Moving forward, Councilwoman Jordan has hope for Harlem and the wider world.

“I want to see the upcoming generation that has been raised here, like myself, given fair opportunities to obtain property and invest in the community they have grown up in,” said Jordan. “I aim to use my time in office to advocate for our neighbors; standing up for all the constituents in my district who have consistently been left behind by people who only seek to fill their pockets.”