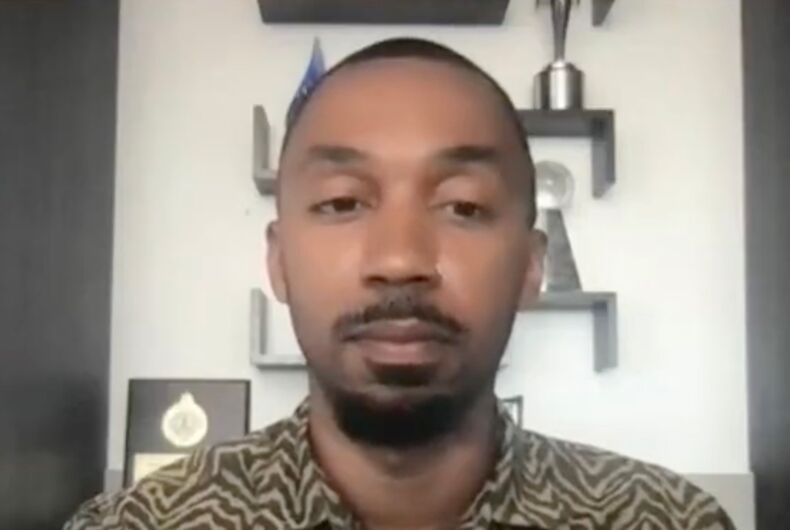 As conservatives across the country continue their fight to ban books from library shelves, the American Library Association (ALA), along with the Banned Books Week Coalition, is currently hosting its annual Banned Books Week.

Held every September since 1982, Banned Books Week’s mission is to celebrate free access to information and combat censorship.

This year’s Banned Books Week falls amidst unprecedented conservative attacks on both LGBTQ books and books about race. According to the ALA, 2021 saw 1,597 book challenges or removals, with the majority of the books featuring LGBTQ and Black people.

One of the most challenged books of 2021 was George M. Johnson’s memoir All Boys Aren’t Blue. The New York Times Bestseller chronicles Johnson’s experiences growing up Black and queer in the United States.

Johnson – this year’s Banned Books Week’s Honorary Chair and a nominee for LGBTQ Nation’s Hero of the Year Award – said the attention on their book has been “bittersweet.”

After all, a lot of people who had not heard of the book now know about it, they explained to ABC News.

“If there’s anything I’m thankful for it’s that it’s actually getting into the hands of the people who need to read it to heal from it.”

Johnson – who said they have had multiple criminal complaints brought against them – also spoke about the importance of LGBTQ literature and history being taught in schools.

They called attention to the fact that the number of young people who identity as LGBTQ continues to rise. In fact, a February Gallup poll found that a whopping 20.8% of Gen Z identifies as LGBTQ.

“It’s extremely important that our curriculum starts to mirror what our actual school systems look like, so having LGBTQ literature [and] LGBTQ history allows students to know that, 1.  LGBTQ people have always existed, as we’ve been here since the beginning of time, and 2. It helps build empathy and bridges between heterosexual students and queer students who will all have to exist in the same space one day as they become adults.”

Conservatives fighting to ban books continue to argue that any LGBTQ content is “pornography.” Parents and politicians alike are petitioning school boards and proposing laws to severely limit the type of content kids can access. In some states, laws have been proposed that would criminalize librarians and other school staff if they don’t remove certain books from the shelves.

Conservatives have claimed that parents should have more control over what their children can access, even though books with similar heterosexual scenes don’t face the same scrutiny. In many cases, their fights have been successful.

“I’ve never seen anything like this,”  Deborah Caldwell-Stone, director of the Office for Intellectual Freedom at the American Library Association, recently told the AP. “It’s both the number of challenges and the kinds of challenges. It used to be a parent had learned about a given book and had an issue with it. Now we see campaigns where organizations are compiling lists of books, without necessarily reading or even looking at them.”

This year's Banned Books Week comes as a new report shows that more than 1,600 books were banned during the last school year. Author @IamGMJohnson joins us for more.

"Everyone should be allowed to be seen and represented in the books that they read." pic.twitter.com/HLMYSfwFcA