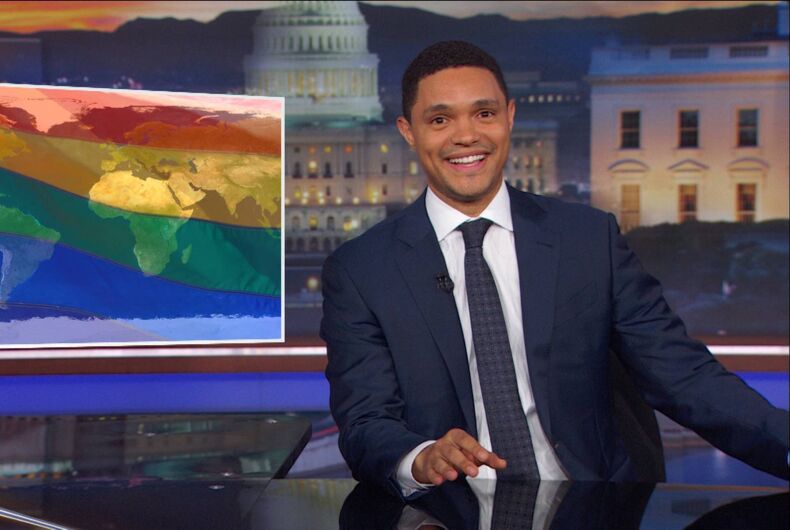 While it’s unclear when exactly he will exit the show (and who will take his place), LGBTQ fans will remember the many times that Noah stood up against bigotry and showed allyship. Here are seven such moments.

When North Carolina passed its 2016 bathroom bill banning trans people from using facilities matching their gender identity, Noah joked about the state’s possible loss of $2 billion in federal funding over the law.

He also mentioned that most public bathrooms have much bigger issues to deal with than trans people. “For starters,” Noah said, “there’s pee everywhere. That’s a bigger problem… And how come that automatic toilet always flushes before I’m done?”

When he trolled Trump’s ‘Religious Liberty Task Force’ with RoboChrist

In 2018, The Daily Show mocked the Trump Administration over its new “Religious Liberty Task Force,” an initiative that mostly sought to give Christians a license to discriminate against LGBTQ people and women.

And who would be a better enforcer for the task force than RoboChrist? In a satirical commercial, The Daily Show’s RoboChrist helpfully destroyed a gay couple’s wedding cake and used a large wooden crucifix to take down an atheist who dared say “Happy Holidays” instead of “Merry Christmas.”

When he celebrated LGBTQ progress worldwide during Pride month

While noting the retirement of pro-LGBTQ Supreme Court Justice Anthony Kennedy in 2018, Noah took a moment to recount the progress made in favor of queer rights.

He celebrated moves in Germany, Taiwan, and Bermuda towards legalized same-sex marriage; polls showing societal shifts in favor of LGBTQ acceptance; the large number of LGBTQ candidates running for office; and also noted a Pride parade thrown in Buford, Wyoming.

“Now, there, it was just two guys walking hand in hand to a CVS, but they were having a good time, so it counts as a parade,” Noah joked.

When he paid a mock tribute to a longtime Christian queerphobe

After anti-LGBTQ televangelist Pat Robertson announced that he would step down as the host of The 700 Club after 60 years on air, Noah and his staff compiled “Now That’s What I Call Yikes!,” a worst-hits compilation of the infamous self-proclaimed prophet spewing hate in the name of a loving God.

After Biden won the 2020 presidential election, Robertson prayed on-air for Satan to stop making everyone believe Biden had won.

Noah gave retired NBA star Dwyane Wade a platform to show how parents can be advocates for their trans children by speaking to him about his trans daughter, Zaya.

In the interview, Wade shared the fears he has for her well-being because of anti-trans legislation being passed nationwide.

“I think when things happen personally to you when you have a personal connection to something or someone, you take it a little bit more serious,” Wade said. “When it happens to you, you have to look at it in the face. You have to.”

When hosting the White House Correspondents’ Dinner, Noah’s best joke of the night was about out bisexual Sen. Kyrsten Sinema (D-AZ).

Sinema was one of two Democratic senators holding up Biden’s domestic agenda by refusing to vote in favor of anything that might upset Republicans and her new corporate backers she shares with the GOP.

“I’m not doing this just for the attention. All right? I’m a comedian, not Kyrsten Sinema,” he said about landing the gig as host. “By the way, give it up for Kyrsten Sinema. Whoever thought we’d see the day in American politics when a senator could be openly bisexual, but closeted Republican? That’s progress.”

The U.S. House recently passed a bill legalizing gay and interracial marriage over fears that the Supreme Court could target other civil rights following the reversal of Roe v. Wade, and Noah announced that the bill “is a great victory for 1995.”

“It’s really strange to be diving back into this debate that we thought was resolved in 2015,” he said, recounting the year that the Supreme Court legalized marriage equality nationwide.

“Also, it’s even weirder that 157 Republicans voted against this bill,” he continued. “So you’re on the record now voting against interracial marriage?”

“Like look, I know mixed couples have ruined your lives for the last couple of years,” he said while displaying photos of former President Barack Obama and former Vice President Joe Biden and then of now-President Biden and now-Vice President Kamala Harris. “But I think it’s time to let that go.”