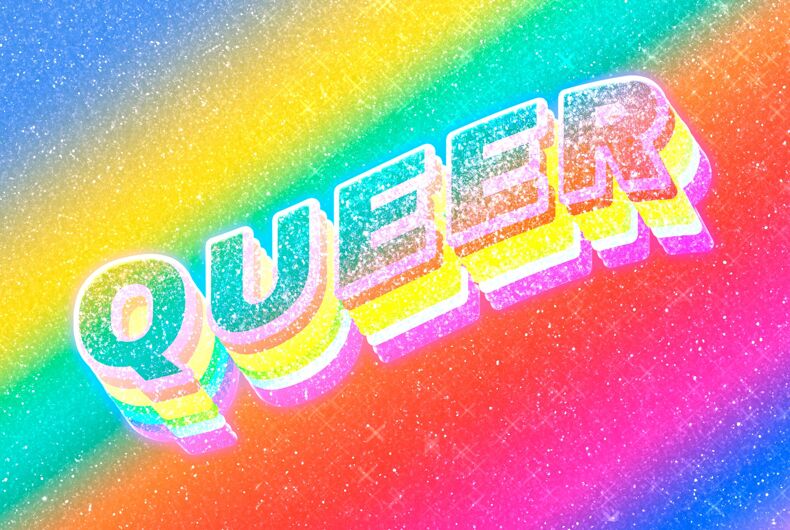 The LGBTQ community is ever-growing. And as the community evolves, so does the language that we use to describe the broad spectrum of identities and experiences found within it.

Here, we answer one of the most frequently asked questions about the acronym: what does the “Q” stand for in LGBTQ?

Related: What is the MLM Pride flag?

What Does The ‘Q’ In LGBTQ Stand For?

The “Q” in LGBTQ stands for two terms, queer and questioning. Here’s a brief breakdown of what these two words represent and why they are significant to the community.

Queer is a term that was once used as a slur meant to insult LGBTQ people. The Columbia Journalism Review states that “queer” first came up in English in 1513. Back then, it meant something or someone peculiar or “not normal”. According to the Oxford English Dictionary, it wasn’t until 1894 that the term was used to mean “homosexual”.

In the late 1980s, queer became a pejorative hurled at LGBTQ people for not adhering to societal norms. Some sources say that the term was “derogatory from the outside, not from within”, suggesting that it was already used as a self-identifier by some LGBTQ folks.

When the gay rights movement took off following the Stonewall Riots and the AIDS crisis of the 80s, suddenly, the word queer was everywhere – often adopted by LGBTQ activists as a source of pride rather than shame.

According to some sources, this reclamation can be attributed to the radical activist organization Queer Nation, which was founded by members of the HIV/AIDS direct action group ACT UP. One of the most popular rallying cries at the time was the phrase “We’re here. We’re queer. Get used to it.”

Today, the word “queer” is defined by GLAAD as “an adjective used by some people, particularly younger people, whose sexual orientation is not exclusively heterosexual.” In other words, queer can be used as an umbrella term and as an alternative for people who feel that the labels gay, lesbian, bisexual, or otherwise may be too restrictive.

In 2016, GLAAD officially recommended that the “Q” be added to the LGBT acronym and urged media professionals to use LGBTQ instead of LGBT in their reporting.

Aside from “queer”, the “Q” is also said to stand for the word “questioning”. Not exactly a gender identity, the term “questioning” is included in the LGBTQ acronym to acknowledge and hold space for those who are still in the process of exploring their gender identity or sexual orientation.

What Do The Other Letters In LGBTQ Stand For?

The LGBT or LGBTQ or LGBTQ+ or LGBTQIA+ acronym is not without its critics, who claim that the alphabet soup can be confusing to outsiders. More letters (and a plus sign) are added to include the vast spectrum of identities and sexualities that exist outside of heterosexuality.

Still, having an ever-changing acronym can be confusing, which is why some organizations use alternative terms to identify the community. One example is the term “gender and sexual minority”.

That being said, the acronym is here to stay. We use LGBTQ. Here is a list of the terms that fall under that acronym, as well as some of the most popular terms that get added to it.

A lesbian is a woman or woman-aligned person who is attracted only to women. Lesbian is used as both a noun and an adjective.

The term is derived from the Greek island of Lesbos. This was the birthplace of the ancient Greek poet Sappho, who wrote numerous poems depicting same-gender love.

Some people still use the term “homosexual” to describe those who are attracted to people of the same gender. The word is derived from the Greek term “homos”, which means “same”. However, it should be noted that this term is now considered outdated, as it comes with negative connotations. As such, avoid using this term.

Bisexual describes someone who is attracted to people of the same and different genders. This is according to the Bisexual Manifesto, a publication released by the Bay Area Bisexual+ & Pansexual Network in 1990.

The “bi” in bisexual does not imply being attracted to only two genders – male and female – but rather the ability to be attracted to both people of the same gender and those identifying as a gender different than one’s own.

Transgender describes people whose sex assigned at birth does not align with their gender identity – one’s innermost conception of their maleness or femaleness.

According to GLAAD, intersex people are those who have “one or more innate sex characteristics, including genitals, internal reproductive organs, and chromosomes, that fall outside of traditional conceptions of male or female bodies.”

Typically shortened to “ace”, an asexual person is someone who experiences little to no sexual attraction. Asexual is also an umbrella term used to describe a variety of identities that fall under the “ace spectrum”, including demisexual, gray-sexual, etc.

The “Q” in LGBTQ stands for “queer”, which is an umbrella term for anyone who is anything but straight. Once used as a slur, the term queer has now been reclaimed as an identifier and a source of pride for the LGBTQ community. It also stands for “questioning”, making room for those who are still unsure of their gender identity or sexual orientation.

Related: Is there a straight Pride flag? Exploring the controversy of the heterosexual flag