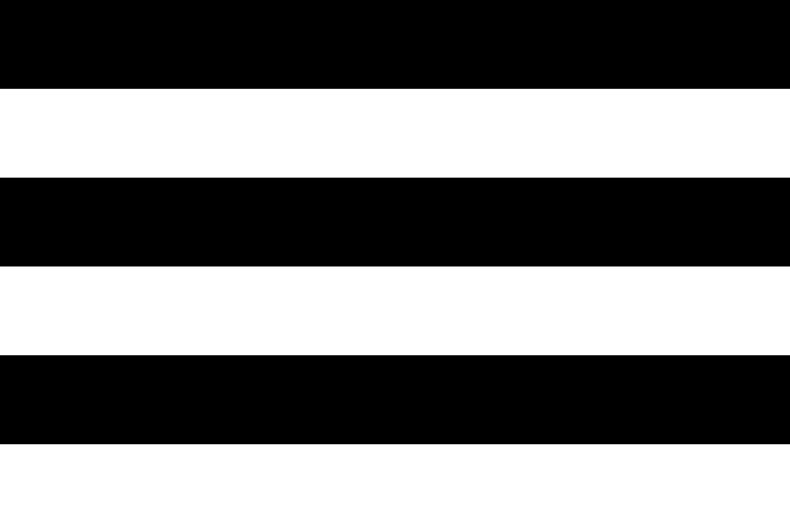 Ever since Gilbert Baker created the first rainbow flag in 1978, flags have stood as a symbol of pride and community for LGBTQ people. As queer folks found community online, forums and blogging sites like Tumblr became the perfect place to brainstorm and test out new flags – flags that now represent the vast spectrum of identities under the LGBTQ umbrella.

Pride flags mean a lot of different things to different people. For some, they represent diversity, community, and love. For others, they represent the ongoing fight for visibility, representation, and equality – things that our heteronormative society has kept from the LGBTQ community. This is why the mere existence of a heterosexual pride flag is so controversial.

Despite this, several iterations have cropped up in recent years. Activists ask, what would be the significance of a straight pride flag when straight people are neither marginalized nor oppressed for their orientation?

Here, we explore the rise in straight pride flags, why they’re a thing, and whether they’re really necessary.

If you’ve ever wondered “Is there a heterosexual flag?”, the answer is yes. There are several, in fact. Today’s straight flags or heterosexual flags were created in the name of “straight pride” – a concept that, while seemingly harmless enough, is often rooted in homophobic and transphobic sentiments.

Several groups and individuals have proposed their versions of the straight pride flag, however, none have yet to be accepted as an official or generally recognized symbol of “straight pride”.

The Many Variations Of The Straight Pride Flag

It’s hard to say how many hetero flags are out there and when the first flag was created. Here are four infamous versions that have stirred controversy in recent years:

Since the 2013 “gay propaganda” law was passed in Russia – a law that bans anyone from “spreading propaganda of non-traditional sexual relations” among minors – the Russian government has continued to crack down on LGBTQ rights in the country in the name of preserving “traditional values”.

In the years that followed, hate crimes have proliferated in Russia, with hundreds of suspected LGBTQ individuals beaten, detained, and tortured. Today, same-sex marriage and adoption for LGBTQ people are outlawed in the country.

Sometime between then and now, in an effort to “warn against” the so-called “gay-fever at home” and to “support traditional values in [the] country”, the United Russia Party unveiled its own version of a “straight flag”.

The flag, featuring a silhouette of a man, a woman, and three children holding hands atop the text “#realfamily” was launched during Russia’s Annual Day of Family, Love, and Fidelity – a Church-State holiday rooted in traditional Orthodox Christian values of marriage and reproduction.

United Russia deputy Andrei Lisovenko told Izvestia that the flag is “our response to same-sex marriage, to this mockery of the concept of family”. He also mentioned his desire to ban the LGBTQ rainbow flag in Russia altogether.

The problematic flag was disparaged by critics not just for its homophobic messaging but also for its striking similarities to the flag of the French group La Manif Pour Tous, another anti-same-sex marriage group. One minor difference between the two flags is that the French flag features two children, while the Russian flag features three.

In 2018, a small village in New Brunswick, Canada faced backlash for displaying a straight pride flag in the center of town. The hetero flag, which features interlocked male and female symbols backdropped by black and white stripes, was brought to the town’s mayor, Carson Atkinson, by 12 residents to show “support for straight people”. This was done after the town had raised an LGBTQ pride flag in June.

Glenn Bishop, one of the 12 who sought to fly the flag, told CBC that the group was “not against the gay pride people at all” and that “anybody’s sexual preference is their choice” – echoing conservative sentiments about gayness being a matter of personal choice rather than an inherent identity.

Immediately, the flag-raising was met with backlash and was removed the next day. However, the incidents left many of the town’s residents shaken.

One user replied to a transcript of the mayor’s speech the day the flag was raised: “Homophobia disguised as ‘equality.’ The mayor and village council should be ashamed of themselves (although I’m sure that isn’t the case). Absolutely disgusting.”

Oh god y’all, there really is a straight pride flag for the #StraightPrideParade. Could use a little work if you ask me. pic.twitter.com/kb9SLBt4xp

In 2019, alt-right group Super Happy Fun America (SHFA) – whose members also attended the Capitol riots on January 6, 2021 – hosted a Straight Pride Parade in Boston, much to the dismay of the LGBTQ community.

Co-organizer John Hugo told Vox that the event was mounted in the hopes that “perhaps one day straights will be honored with inclusion and the acronym will be LGBTQS” and that “all communities are welcome”.

But the legitimacy of this so-called mission comes into question when many of the group’s members are associated with various homophobic, transphobic, and white supremacist far-right factions such as the Proud Boys, the New American Guard, and Resist Marxism.

On the SHFA website, you can find the group’s “ten-point plan to save America” which includes “defeating cultural marxism”, re-establishing traditional values, and removing “all gender madness” and “anti-American revisionist history” from studies.

During promotions of the event, the SHFA posted a photo of a straight flag consisting of a blue triangle and a pink triangle and the interlocked male and female gender symbols on its website. Dozens of straight pride flags were also brandished during the parade alongside American flags, “Don’t Tread on Me” flags, and Trump banners.

Critics have called the parade an act of trolling toward the LGBTQ community. The parade route was even modeled directly after the Boston pride parade’s route.

If you were on TikTok, Reddit, and Twitter in March of 2021, you may have come across a trend called the #SuperStraight movement. According to TikToker Kyle Royce, who coined the term in a video made in February of the same year, “super straight” is a “new sexuality” he created because “straight men like myself get called transphobic because I wouldn’t date a trans woman.”

“[A trans woman is] not a real woman to me,” he added. “So now I only date the opposite gender, women, that are born women. So you can’t say I’m transphobic now because that’s my sexuality.” The video – which was tagged #sexuality and #funny – garnered more than two million views before being deleted. However, the story doesn’t end there, unfortunately.

According to Insider, far-right and neo-Nazi users uploaded the video to 4chan. They conspired to use the term to troll LGBTQ people on Reddit and Twitter and “drive a wedge” in the communities by using “the left’s tactics against themselves”. These trolls spread memes and photos of the super straight pride flag, which consists of a half-black, half-orange background with interlocked male and female gender symbols pointing outwards.

According to super straight “advocates”, this sexual orientation describes cisgender people who are only attracted to cisgender individuals of the opposite gender. Super straight people claim that the identity is just like any other identity that falls under the LGBTQ spectrum, and that identifying as one is a way to “come out” and express that they are proud to be straight and cis.

But, as LGBTQ critics have pointed out, the super straight trend is merely a way to deflect claims of transphobia. It is, after all, borne out of one straight man’s desire not to be labeled as transphobic for having a “preference” for cisgender women.

However, what many people fail to realize is that this so-called preference is deeply rooted in the othering and fetishization of trans people. Those who claim to be super straight and those who are transphobic deny the idea that trans women are women and that trans men are men. They hold a dehumanizing view of trans people that reduces them merely to their genitals when, in fact, it’s impossible to even know someone’s genitals based on their gender.

Waving a super straight pride flag and “coming out” as super straight also feels like a slap in the face to trans and non-binary people who’ve faced harassment, discrimination, sexual violence, and even death – merely for living their truth.

As VICE puts it, “Underneath the clamor though, there seems to lie straight fragility, far-right undertones, insecurity and co-opting of the LGBTQ+ struggle for equal rights, representation, and recognition while forgetting that the Super Straights never lacked those things in the first place.”

What Is The Straight Ally Flag?

The difference between straight allies and straight pride defenders is clear. The former stand with the LGBTQ community and recognize the immense disadvantages they face in a cis-heteronormative society. They put in the work to exercise their privilege to help the LGBTQ community in the fight for equality.

The latter, on the other hand, echo the cries of the #AllLivesMatter and white supremacist movements. In other words, they think of equality as a pie where, if one group is given certain rights, they feel as if they begin to lose their own.

They use the rhetoric of the left and play victim out of fear that the world as they know it – one where they are free to express their transphobic and homophobic sentiments – will change. A world where they cannot force their traditional, conservative values on everyone.

But this simply is not true. Equality is not pie – there is enough to go around for everybody.

No, they are absolutely unnecessary.

Often used by far-right groups, straight pride flags are tied to ultra-conservative, white nationalist ideologies that paint LGBTQ people as morally corrupt and in direct opposition to their traditional ideals. They’re tools used to deliberately mock the LGBTQ movement and the struggles that the community has faced for centuries.

Whether or not these flags will ever become mainstream remains to be seen, but we think it’s important to explore the controversy around them and ask why some people feel the need to identify as “straight”. After all, isn’t that just another way of belittling and discriminating against LGBTQ people?

Related: A school banned the rainbow flag from being flown. Students & teachers had the best response