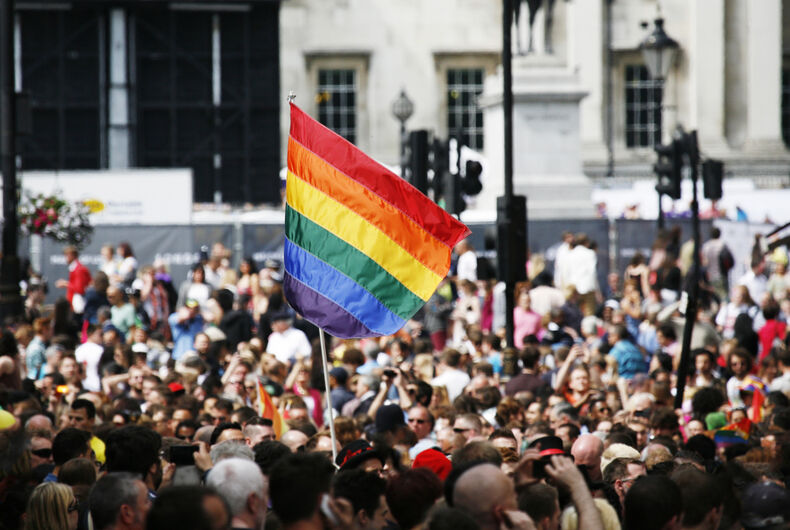 Students and faculty at a New Jersey school rallied to show their LGBTQ pride after a school board policy prevented them from hoisting a rainbow Pride flag on the flagpole in front of the school.

After students at Passaic Preparatory Academy raised the flag last June for Pride Month, the Board of Education said it realized there was no policy covering which flags could be flown in front of schools. They worked to implement a policy that only allows for an American flag, a New Jersey state flag, or a school flag to be flown.

The school’s Gay-Straight Alliance (GSA) staged a protest involving approximately 75 students in March 2022 demonstrating against the decision, calling it discriminatory.

School board president L. Daniel Rodriguez told NJ.com, “While we respect and appreciate the many different opinions on this matter, the current flag policy is non-discriminatory. It ensures consistency across the school district with respect to the flags.”

Rodriguez contended the policy was about “fairness” and a desire to avoid potential future controversies that might arise.

A few weeks before the board upheld its decision to not fly the Pride flag on its flagpole, flags were hung in nearly every window of the school. The board has declared the flags do not contradict its policy, as that only encompasses the flagpole and not other parts of the building.

“It makes me feel very happy,” Adylyn Correa-Pagan, a freshman, said. “Some kids feel like they need the support, because they don’t get it at home. The fact that they could come to school to learn in an environment where they feels safe and protected and supported for or something they can’t change, I think it’s a wonderful thing.”

The school’s principal, Stacy Bruce, allowed the flags to be displayed and has reportedly been supported by the school’s superintendent, Sandra Montanez-Diodonet, who said, “I am aware of the displays. They do not violate any policy. The policy, as I understand it, refers to flag poles on the outside of school buildings.”

Another student, 18-year-old Christopher Yepez, said that the move was heartening. “The principal had to follow the district rules. She had no say. But to have people that make you feel safe and comfortable, makes you want to come to school. I feel safe. Today is a good day.”