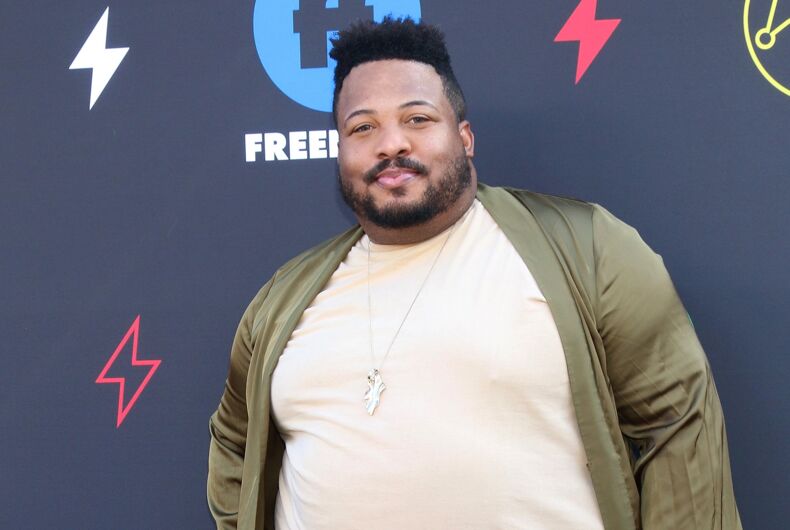 Television has seen its fair share of reality dance shows – So You Think You Can Dance is in its 17th season while Dancing With the Stars is in its 30th. TV’s newest offering in the reality dance genre is Come Dance With Me, which is garnering buzz thanks to plus-size model and queer judge Dexter Mayfield.

But just who is this loud, proud, and eccentric addition to the panel of Come Dance With Me judges? This article will tell you everything you need to know about Dexter Mayfield.

What Is Come Dance With Me?

Come Dance With Me is a reality TV show that features young dancers-in-training who pair up with untrained family members to compete for a prize of $100,000. Pairs will learn new routines that adhere to a specific dance style each week, with the lowest-scoring teams performing a freestyle dance-off to keep their place in the competition.

The first season’s roster of performers includes a doctor, teacher, social worker, and engineer, among others.

Who Is Dexter Mayfield?

Among the show’s renowned panel of seasoned judges is Dexter Mayfield, a professional dancer, actor, and plus-size model. Hailing from Dallas, Texas, Mayfield made his debut at L.A. Fashion Week in 2015 as a model for Marco Marco. Mayfield has since graced the covers and spreads of publications like GAYTIMES and Hardy Magazine.

After moving to L.A. in 2009, Mayfield immediately enrolled in dance classes, overcoming obstacle after obstacle. During initial auditions, Mayfield claimed to have been advised not to “femme out” to avoid losing jobs.

However, discussions about body positivity and size inclusivity became prevalent mid-2010s, allowing Mayfield to insert himself into exclusive industries as a fat, queer man. He eventually landed roles in music videos for Taylor Swift, Jennifer Lopez, and Katy Perry. Swift’s music video “You Need to Calm Down”, in which the model appeared, won two MTV Video Music Awards – thrusting Mayfield into the spotlight.

Overcoming The Pressures Of Being A Black Queer Performer

Mayfield says that his struggle with body image began at age seven, when his youth football team categorized him as “younger but heavier”. The now-36-year-old continued to experience body-shaming in his high school years, eventually internalizing the criticism and avoiding environments and situations that would potentially expose him to prejudice.

Initially turning to dance as a form of fitness, it became Mayfield’s primary form of expression. Despite earning validation from fellow dancers and instructors, his breakout into mainstream dance media was not an easy one.

Mayfield said, “Being a fat, black, queer performer in the industry, almost every odd is against you…I was too gay, or I wasn’t masculine enough.”

After landing his first runway walk for designer Marco Marco in 2015, Mayfield began his journey toward body acceptance. Instead of “dealing with” his body and viewing it as an impediment to his success, Mayfield embraced it, celebrating all body types by participating in inclusive fashion shows like Savage X Fenty.

By deep diving into the modeling industry, Mayfield feels he has been able to usher in more body positivity and open up conversations with struggling young men. Mayfield continues to rally for more visibility, such as placing plus-size models on billboards and television.

Making A Difference On Come Dance With Me

Since becoming a judge on Come Dance With Me, Mayfield says he was deeply encouraged to be his “authentic self…whole self…most elevated self.” Critics have described early episodes of the show as “unapologetically queer” and “wholesome”.

Mayfield credits the show for giving him a platform to use his voice instead of his body, saying, “Being a dancer, we don’t often get to use our voices.” For the first time, Mayfield feels he can be “taken seriously as an artist”.

When Can You Catch Dexter Mayfield On Come Dance With Me?

For years, now-celebrated dance superstar Dexter Mayfield was “put into a box [because of] his appearance and sexuality”. Today, Mayfield lends his voice to a more diverse generation of black and queer performers who want to claim their stake in mainstream media.

While fat-phobia remains rampant, especially within the LGBTQ community, Mayfield and others like him continue to dismantle prejudiced standards and make room for something more authentic and human.