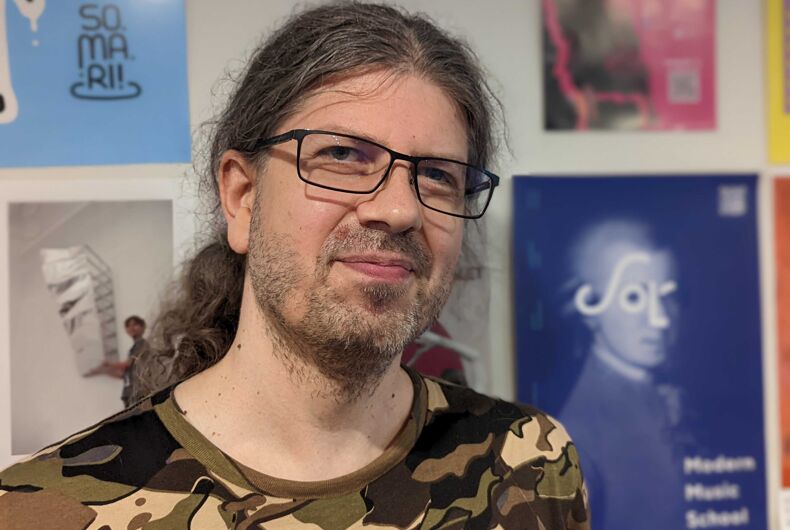 Courage in politics is too often lacking.

In the face of challenges to democracy, minority groups are nearly always utilized as the foil of the fascists, framed as an enemy to society. In 2022, as liberty hangs in the balance, the LGBTQ residents of the United States face unprintable accusations levied by those who hate freedom, and the Republic, as a whole.

During times like this, straight allies, especially political ones, are needed to stand unified with the queer community, or all risk descending into life under totalitarian rule.

Across the Atlantic Ocean, a decade ago, a country that had recently become a member of both NATO and the European Union was also facing a rocky road toward a truly democratic future. And LGBTQ rights were under siege.

The country is Romania, a nation taking its first, nascent steps towards full liberalization of both economy and society, and the ally who stepped up to fight for the human rights of his fellow citizens is Remus Cernea.

A longtime advocate for equality who took part in the first Romanian Pride march, Cernea, elected in 2012 as a member of the lower chamber of parliament, understood the fragile standing of his gay and lesbian friends in greater society.

In looking for a way to present Romania’s LGBTQ populous as human beings first, he devised the idea of sponsoring the nation’s first civil partnership bill, a monumental task in a country that had, at the time, only recently decriminalized same-sex sexual relations.

Introducing the legislation in the spring of 2013 opened Cernea up to significant criticism, hostility, and the immediate end to any reelection hopes, but speaking with LGBTQ Nation almost seven years after the bill was ultimately defeated in December of 2015, Cernea harbored no regrets, and pointed to his would-be law as the reason a constitutional amendment to define marriage as an institution between a man and woman failed in a national referendum several years later.

LGBTQ Nation: Tell us the story about why you presented the first LGBTQ partnership bill in Romania.

Roman Cernea: It was important to first start the discussion and the public debates because I was fully aware that we had a chance to change mentalities. It was only in 2001, under pressure from the United States, that old, communist laws were changed, laws used to punish LGBTQ persons. The United States sent a gay ambassador, the first, to Romania in 2000 to try and force things along. It helped.

You are a straight man? Is that correct?

You’re brand new, you go to Parliament and you put this bill forward? Why?

I participated in the first Pride march in Bucharest, people were against us on the streets; they threw stones at us. Then, we had 200 or 300 people, and even though the police were around we had clashes. People ended up hospitalized because of homophobia. Eventually, though, around 2010 things became safer and safer. The government didn’t want to get embarrassed. And I put the bill forward when I was elected because democracy is a process, a process that never ends, and as new issues become known by the people, and people become aware of them, we have to work towards their full acceptance.

Tell us about democracy and LGBTQ rights.

You were attacked for putting the bill forward, it was only a partnership, not even a marriage law, what happened to you?

First, the bill was for everyone. Gay, straight. Anyone who wasn’t married but wanted financial rights, health rights, things like that. The backlash was huge though. You have to understand Romania has some very strong conservative forces. Maybe not a majority, but loud voices in public, and some politicians made awful comments.

What are some of the things they said?

“Gay people are sick.” The Archbishop of the Orthodox Church told me I needed a “psychiatrist and a priest.” I was told I had a confused mind too.

How did you respond to the criticism?

I didn’t become aggressive toward them. In fact, I told them I would be Christian too, and turn the other cheek. This made them even angrier! When the bill was read at the judiciary stage of the process, which is the most important commission, I quoted Corinthians 13, a beautiful passage about love, and I tried to quote it but was cut off since as a non-Christian, it was labeled blasphemous for me to read by a priest who was at the hearings.

How did the final vote go?

About 92% against. Four were in favor, three abstained. The rest against. Even the abstentions were a sign of political conviction and courage.

Did you end up an LGBTQ hero?

I already had great cooperation at the time with Romania’s oldest queer rights group, which is called Romania Accept. And I made sure to include LGBTQ citizens as witnesses to the law, to show that they were people first and foremost. I invited them to debates and to committee hearings.

What was the legacy of this act of courage for you?

We saw real results, after hundreds of debates, interviews, and hearings. In 2010, around 8% of Romanians supported same-sex marriages, now 10 years later, it is at 35%. A few years after my bill was defeated, we had a national vote to ban same-sex marriages through a constitutional amendment. They tried to do everything possible to make it law, including extending voting days. 30% of the population had to show up to make the plebiscite count. Even with the additional day, only 20% even cast a ballot. We succeeded in making this an issue that couldn’t be used as a weapon, and that was a huge victory for LGBTQ rights and human rights.

I’m speaking to you in Kharkiv, Ukraine right now, where you are working on several stories regarding human rights. A literal war is going on around us but social progress is being made despite this. Tell me your view on where Ukraine stands regarding democracy and the LGBTQ community.

Ukraine is taking steps, small steps, baby steps, but clear steps towards equality for the LGBTQ community. The recent statements by President Zelensky, where he is open to civil partnerships, and the fact that gays and lesbians are serving in the military show just how far Ukraine has come in regard to human beings, the rule of law, and the LGBTQ people specifically.

One final question. Any political regrets?

Besides not getting the bill passed, none. I’m guided by my conscience, by what’s right, and not by elections or fear.