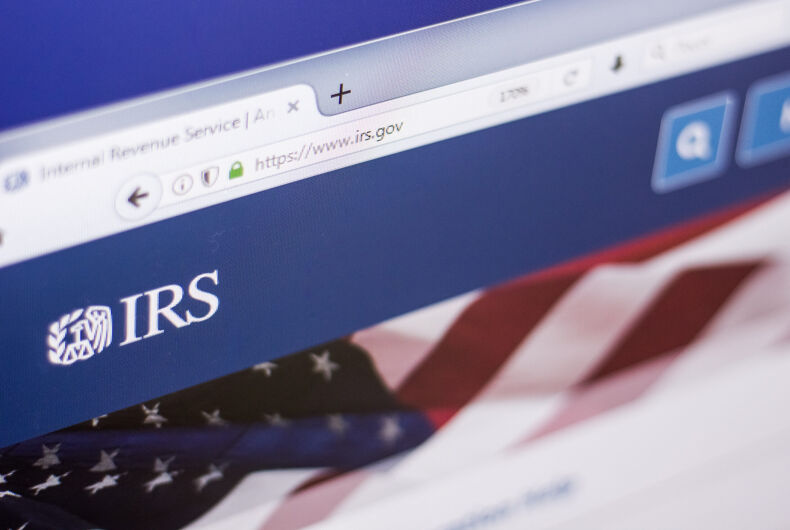 A massive hack of the Liberty Counsel — a right-wing Christian legal advocacy group that has been certified as an anti-LGBTQ hate group by the Southern Poverty Law Center (SLPC) — has revealed that its affiliated nonprofits may have broken IRS tax rules forbidding nonprofits from endorsing candidates for political office.

The hack — carried out by an unknown person affiliated with the Anonymous hacktivist collective and published online at the website Enlace Hacktivista — contained several hundreds of gigabytes worth of web pages, emails, documentation, and financial donor data from Liberty Counsel and its affiliated nonprofits, including Liberty Counsel Action, Faith & Liberty, and Christians in Defense of Israel.

In a press release the hacker wrote, “Noticing a worrying trend of far-right and anti-abortion activists aligning themselves with the evangelical Christian movement, hiding their funding sources behind laws that allow church ministries to keep their donations secret, we decided to bring about some much-needed radical transparency.”

Liberty Counsel Action is designated by the IRS as a 501(c)(4) nonprofit organization, which allows it to endorse or oppose candidates for office. However, the IRS designates Faith & Liberty and Christians in Defense of Israel as 501(c)(3) nonprofit organizations. As such, they’re forbidden by the IRS from endorsing or opposing candidates for office.

The investigative news website The Intercept found emails from Faith & Liberty and Christians in Defense of Israel encouraging supporters to vote for then-President Donald Trump in the 2020 election.

Two weeks before Election Day, Christians in Defense of Israel sent out an email that said, “Israeli Jews support President Trump, because they know under a Trump administration, America has Israel’s back … and peace in the Middle East is on the near horizon,”

On Election Day 2020, a Faith & Action email referenced right-wing reports that then-candidate Joe Biden had helped his son Hunter Biden by using “American tax-dollars to bribe foreign nationals to protect his son’s behavior,” adding that Joe Biden “felt so comfortable with this level of corruption that he even bragged about it, on camera.”

“A great responsibility rests on our shoulders,” the group’s email stated. “Our decision will determine who will nominate judges, and so much more.”

The hack also revealed that Liberty Counsel and its affiliated nonprofits also solicited donations by repeating Trump’s lies about the 2020 election being “stolen” and spreading right-wing conspiracy theories about government plans to institute “vaccine passports” that would track and monitor people’s movements.

The hacker gained access to Liberty Counsel’s data by discovering vulnerabilities in Site Stacker, a customer relationship management software used by the Liberty Counsel and developed by WMTEK, a company that builds software for Christian nonprofits. The hacker found that a WMTEK administrator used the password “Password1” which provided access to WMTEK’s other clients.

As a result, the hacker obtained membership and donor records from over 90 other Christian nonprofits. WMTEK’s CEO Dan Pennell declined to comment to The Intercept.

The Liberty Counsel has long represented bigoted clients who use the guise of “religious liberty” to oppose any expansion of LGBTQ civil rights.

The IRS is unlikely to take action against any of Liberty Counsel or its affiliated groups because of the IRS’s lax enforcement of such rules. But the Liberty Counsel isn’t the only SLPC-certified anti-LGBTQ hate group trying to skirt IRS rules.

In early August, 40 members of Congress wrote an open letter asking the IRS and Treasury Department to investigate the anti-LGBTQ hate group Family Research Council and other far-right organizations that have tried to avoid federal taxes and audits by registering as churches.