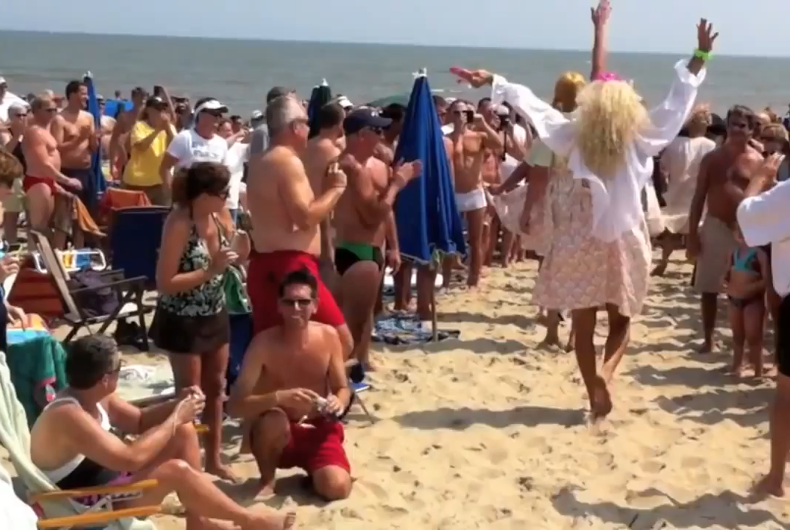 A highlight of Labor Day Weekend in LGBTQ-friendly Rehoboth Beach, Delaware, has come to an end. Since 1988, a drag volleyball game has been held on Poodle Beach nearly every year on the Sunday before Labor Day. But this year, organizers posted a message on Facebook saying it’s over.

“Hey fans! Some sad news to share,” the message began. “Due to numerous circumstances, it seems as if our last Drag Volleyball game in Rehoboth has already been played. We are sorry to disappoint you and put an end to this Rehoboth end of summer tradition. Thanks for all of your support throughout the years.”

The game traditionally drew a large crowd to the south end of the boardwalk in Rehoboth Beach, the Mid-Atlantic resort where President Joe Biden has a vacation home.

Much of the attraction was that members of the two teams chose themes that were kept secret until they appeared on the beach – the Madonnas, the Chers, the First Ladies. Each player had a drag name and dressed up.

Long before RuPaul made a splash on TV, the themes made it campy: the Golden Girls, the 1950s housewives, Vegas showgirls, Pop Divas, Dallas Cowboy cheerleaders, Twisted Barbies, Gaga Galaxy. One year, when one team’s theme was Dorothy from the Wizard of Oz, organizers arranged to have a plane fly by with a banner that read: “Surrender Dorothy.”

As with the annual High Heel Drag Queen Race in Washington, D., C., it wasn’t just a gay thing – the audience included a wide range of spectators. People came early to claim a good spot on the beach. During breaks in the game, players would sing, dance, and put on skits. The score of the game didn’t matter as much as hearing the songs and gawking at the elaborate costumes.

The game had been canceled in 2020 and 2021 due to the COVID-19 pandemic. It also was canceled in other years, including 2005 and 2016, due to weather conditions, and one year when the players took a break. (The first year, one team of guys in drag played a team of lesbians, but after that, it was two teams of guys in drag.)

News of this year’s cancellation began spreading Sunday after the farewell message was posted on the Rehoboth Beach Drag Volleyball page on Facebook.

According to one insider, the game wasn’t canceled by any political pressure but because one of the teams decided to drop out. It wasn’t a complete surprise: the players had warned in a 2019 social media posting that their 2020 match would be the last, but then it wasn’t held due to the pandemic.

Since Sunday, Facebook commenters have been sharing their memories and lamenting the changes they’ve seen in town over the years.

More than a few expressed the view that Rehoboth Beach isn’t as gay as it used to be, with the disappearance of night spots such as The Renegade, Cloud 9, and The Strand; local crackdowns on house parties, and higher prices making it harder to afford a vacation.

“So sad, the town is just not the same anymore,” Glenn Randall, a former columnist for a local publication, wrote on Facebook.

“We are getting homogenized in Rehoboth like we have in most historic Venues,” lamented Alexander Westmoreland. “Pride parades will be next!”

Others were grateful the games lasted as long as they did.

“This was the cherry on top [of] the summer sundae for me for so many years,” said Leanna Johannes. “Thank you for enriching our community, and for giving us such wonderful summer memories.”

“It’s been an amazing run!” said Charles Plante. “Thanks for the fun times boyz!”

“You gals brought so much laughter and love into my world and countless others,” wrote Michael Ulrich. “Congratulations on being Poodle [Beach’s] longest running sitcom, competitive volleyball match, fashion, cheerleading competition, dance off, variety show and RuPaul palooza! You nailed it!”