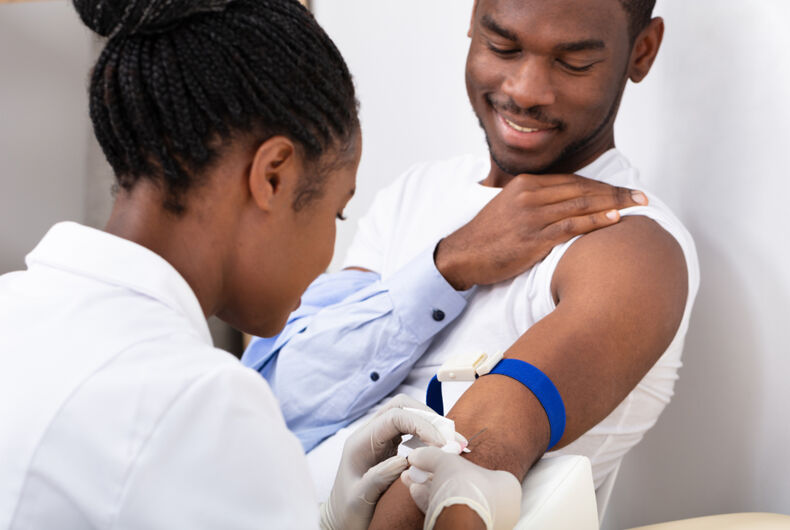 Technicians at two of the largest commercial labs in the U.S. have been refusing to draw blood from suspected monkeypox patients.

CNN confirms that phlebotomists at Labcorp and Quest Diagnostics are refusing to perform the tests that are both standard practice and necessary to identify the disease as well as differentiating between monkeypox and other STIs.

It remains unclear whether the techs are refusing on their own or due to company policy.

“The fact that this is happening is an echo of the earliest days of HIV,” says David Harvey, executive director of the National Coalition of STD Directors. “This is a grave dereliction of duty.”

“This reminds me of the olden days when people didn’t want to care for HIV patients,” said New York University bioethicist Arthur Caplan.

This week, case of monkeypox in the U.S. jumped 81% from last week, with the CDC reporting 6,326 cases as of August 2. In the U.S., the disease has spread mostly among men who have sex with men.

Experts worry that the labs’ refusals to take blood from patients will contribute to stigma and discrimination around monkeypox, discouraging those who may have been exposed from seeking treatment and contributing to the spread of the outbreak.

“The fact that phlebotomists are afraid of taking specimens makes it even more unappealing for someone to ask for a monkeypox test,” says Chin-Hong, an infectious disease specialist at UCSF Health.

Diane Crawford, CEO of the National Phlebotomy Association says that technicians have no reason to fear taking blood from monkeypox patients as long as they take standard precautions.

In a statement, Quest spokesperson Kim Gorode said that the lab is following “CDC guidelines that state that patients with confirmed or suspected monkeypox infection should be isolated. Once an individual is out of isolation, we will provide service for them.”

However, CDC spokesperson Kristen Nordlund says that “CDC’s monkeypox isolation guidance specifically states that people should remain isolated, except to get medical care. Obtaining a sample for testing is medical care that could lead to diagnosis or treatment if warranted.”

In a subsequent email to CNN, Gorode said that Quest is revaluating its guidance “in light of updates posted on the CDC site” on Monday. Another spokesperson from the CDC said that the only update Monday was that the sentence about the isolation guidelines not applying to health-care settings was moved higher on the page.

Labcorp president of diagnostics Dr. Brian Caveney said that the company is reviewing its policies on drawing blood from suspected monkeypox patients and that they are likely to change.

Meanwhile, far-right conservatives like Rep. Marjorie Taylor Greene (R-GA) have already begun to stigmatize the disease with outlandish claims due to the outbreak among gay and bisexual men.