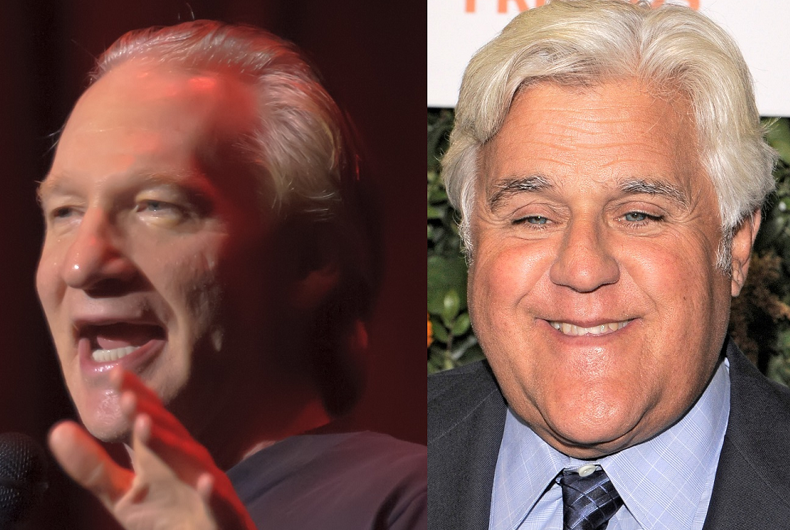 Jay Leno recently revealed why he stopped telling transphobic jokes, and in the process delivered a few subtle digs at Bill Maher.

During a conversation on Maher’s podcast Club Random, the former Tonight Show host was explaining how he kept the late-night talk show fresh during his tenure as host.

“When you don’t think you’re the smartest person in the room, you shut up and you listen,” Leno pointedly told Maher.

Leno went on to explain that he made a point of listening to the people around him while hosting The Tonight Show, including taking their criticism seriously.

“We had the same crew for 22 years. When they would tell me the show sucked, I would go, ‘Why’d it suck?’ And they’d tell me why it sucked.”

The comedian recalled an incident when a crewmember became upset by a joke Leno had made about transgender people. “One time we had a guy in the basement who I didn’t know. I had done at the time a transgender joke, and I heard this guy was really hurt about it. So, I go down to see him and he explained the situation.”

Leno told Maher that he heard the crewmember out and apologized, telling him, “You’ll never hear another transgender joke from me again.”

Maher’s response to the anecdote was typically vile: “I thought you were gonna say he sewed his d**k back on.”

“You’re only as good as your last joke,” Leno countered.

Maher has a history of telling anti-trans jokes of his own, but has been unapologetic. Last year, he was criticized for comments about Caitlyn Jenner, who was then campaigning for California governor. Maher drew criticism again earlier this year for spouting transphobic misinformation on Real Time. In a blithely anti-LGBTQ segment which aired in May, the host fretted that the number of Americans identifying as LGBTQ has been “roughly doubling every generation.”

“I’m just saying that when things change this much this fast people are allowed to ask, ‘What’s up with that?’”

Maher then immediately shifted to questioning and ridiculing trans identity, specifically trans youth. “All the babies are in the wrong bodies? Was there a mix-up at the plant like with Cap’n Crunch’s Oops All Berries?”

Maher went on to dismiss trans identity as “trendy.”

This is not the first time Bill Maher has spouted inaccurate, anti-trans rhetoric. But this time he's targeting youth. Pundits who fearmonger about trans youth and surgeries need to learn the facts. It's not a trend. It's not a phase. Youth are not rushed into medical transition.

GLAAD responded to the segment in a statement saying, “This is not the first time Bill Maher has spouted inaccurate, anti-trans rhetoric. But this time he’s targeting youth. Pundits who fearmonger about trans youth and surgeries need to learn the facts. It’s not a trend. It’s not a phase. Youth are not rushed into medical transition.”

“It’s disingenuous to say you are simply ‘asking questions,’ and then provide inaccurate answers that parrot anti-trans activists seeking to harm trans people,” the statement continued. “Parents who listen to their kids, doctors, and every major medical association, know more than comedians like Bill Maher.”

Some lab techs are refusing to draw blood from monkeypox patients