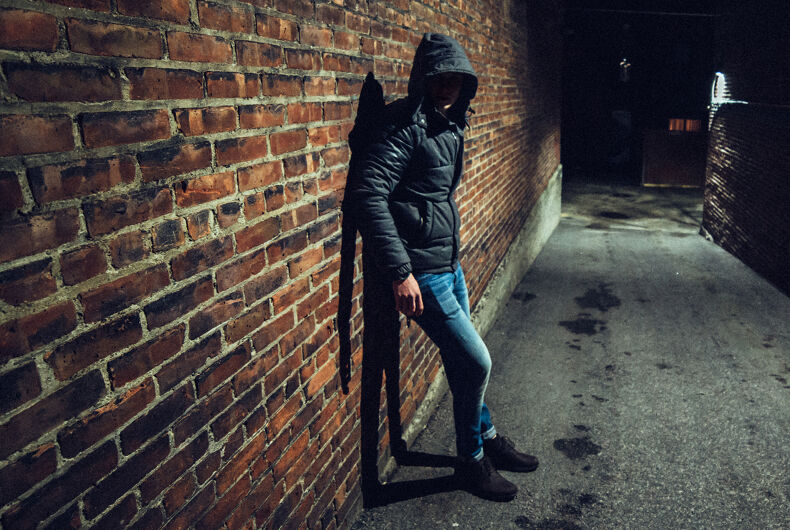 A journalist for the Manchester Evening News and his companion were verbally and physically harassed last week in the city’s iconic Gay Village.

“He started to get right up in my face, pushing me, shoving me, grabbing me and kicking me in the legs quite hard, then he went to go towards my friend. He said, ‘You are in my space, you are trying to touch me, you queer.'”

Daniel McLaughlin, 28, a podcast producer at Manchester’s largest news daily, was waiting for a taxi with his nonbinary friend in the early hours of Friday morning after a night out in the city’s popular gayborhood centered around Canal Street. McLaughlin, who’s bisexual, was wearing a rainbow badge.

McLaughlin told the Evening News he noticed a man who he thought was in his 20s heading towards them from nearby Sackville Gardens.

The man was “muttering to himself,” McLaughlin said, then directed “absolute hatred” towards them. “He was calling us nonces, fa***ts, perverts, every homophobic slur under the sun. He fixated on calling us names.”

“I started saying, ‘We’re not nonces, we’re puffs, there’s a difference,’ to which he became more aggrieved, shouting the same slurs. He was clearly inebriated, clearly angry about something.”

McLaughlin recounted that as a taxi pulled up, the “aggressive drunk” pushed him onto the moving vehicle, then continued to hurl abuse and followed McLaughlin as he tried to get into the taxi on the other side.

As the man was shouting “Get in the f**king car right now!” McLaughlin and his friend managed to get inside and pull the door shut. The driver sped away quickly from the ugly scene.

Daniel said the “old slurs” hurled at the pair were “nothing original,” but the young man’s age and level of aggression had shocked him.

“It didn’t particularly hurt,” McLaughlin said. “He was drunk, they were not focused attacks. But the thing I found the worst was the absolute hatred in his eyes, just the aggression and hatred towards us.”

“We hadn’t done anything. We had stood outside. But there was absolute hatred towards us, and the fact this guy was our age, to come up with this vitriol.”

“My theory was, he had all this pent up aggression. I think he went to the Gay Village looking for a fight. He went there with the purpose of starting trouble. The words he was using were recycled, words he had clearly heard elsewhere. Just archaic, older insults.”

“He wasn’t making arguments, he was just using the words, he wasn’t stringing a full sentence together.”

McLaughlin says he didn’t report the incident to police, believing there was “very little they could have done.” While he didn’t suffer any major injuries from the attack, McLaughlin said it did raise concerns about the safety of the LGBTQ community away from the Village itself.

“It’s something that’s not untypical, and that’s the frightening thing really. I moved to Manchester in 2012 for university and one of the big reasons was the Gay Village — I wasn’t quite out the closet at the time, but — having this place where I could be myself.”

“That’s why so many gay people move to Manchester, but in recent years it’s not felt like a sanctuary. It’s not necessarily aggressive, but I feel that the queer community is being pushed out.”

“The village itself I think would be safe, but because we had just left the Gay Village at Sackville Gardens, just a bit further away, that’s where the protection ends. I do feel trepidation when I exit the Village.”