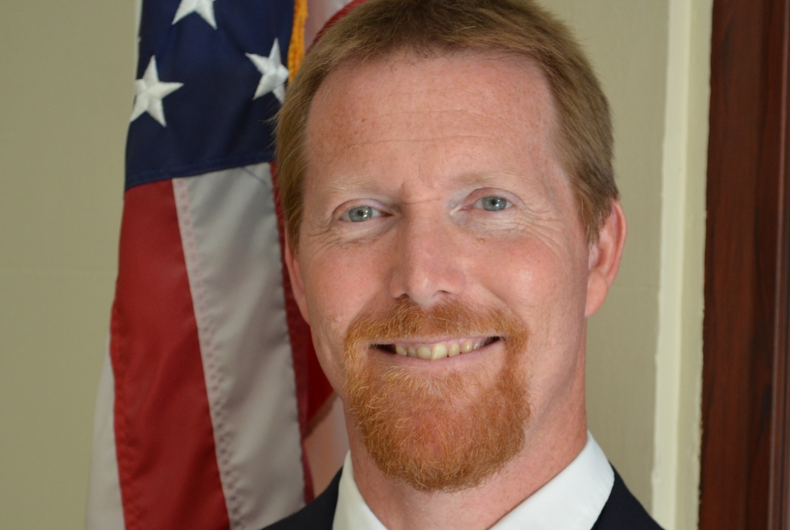 Scott Esk, a candidate for the Oklahoma House of Representatives, just lost his primary runoff election two months after beating his opponent in the first round of primary voting. The loss comes several days after comments Esk made about stoning gay people to death resurfaced in the media.

In June, Esk got the most votes in the Republican primary election in Oklahoma House District 87, ending up with 37.0% of the vote, more than second-place finisher Gloria Banister’s 35.7% of the vote. Since neither of them got over 50% of the vote, a runoff was held yesterday.

KOCO is reporting that Banister has won the primary election with nearly 58% of the vote, an upset considering she got fewer votes in the first round.

In 2013, Esk was commenting in a Facebook conversation about the Pope saying that he couldn’t judge gay people. Esk posted some Bible quotations, including the part of Romans 1 where the Bible says that a long list of people who sinned is “worthy of death.”

Another person asked him: “So, just to be clear, you think we should execute homosexuals (presumably by stoning)?”

A year later, a journalist asked him about those comments. He said it was “totally just” to kill gay people.

Esk made several videos over the intervening years where he promised to “set the record straight” on those comments. He didn’t take back or apologize for the comments in those videos. In fact, even though he insisted that local media published a “hit piece” on him when they reported his comments, he doubled down.

“Any Christian should be in the position to say that this is sin or this is good. If we don’t make that distinction, we’re not going to help people,” he said in the first video published in 2015.

“Well, does that make me a homophobe? Maybe some people think it does,” he said in another video published earlier this year. “But as far as I and many of the people, the voters of House District 87 are concerned, it simply makes me a Christian. Christians believe in biblical morality, kind of by definition, or they should.”

“The fact is, that it’s much more offensive knowing what obscene things homosexuals do with each other than it is for somebody to hold the view that it is indecent.”

The Oklahoman asked Esk about his comments for a story that was published on Saturday, August 20. Esk pointed the paper to his videos.

“I’ve stood up for what is right in the past, and I intend to in the future and I am right now,” he stated. “That’s got me in trouble. The media are not my friends, as far as I’m concerned.”

On Tuesday, Republican primary voters picked his opponent over him by a large margin.

How an anti-gay church accidentally raised money for LGBTQ rights