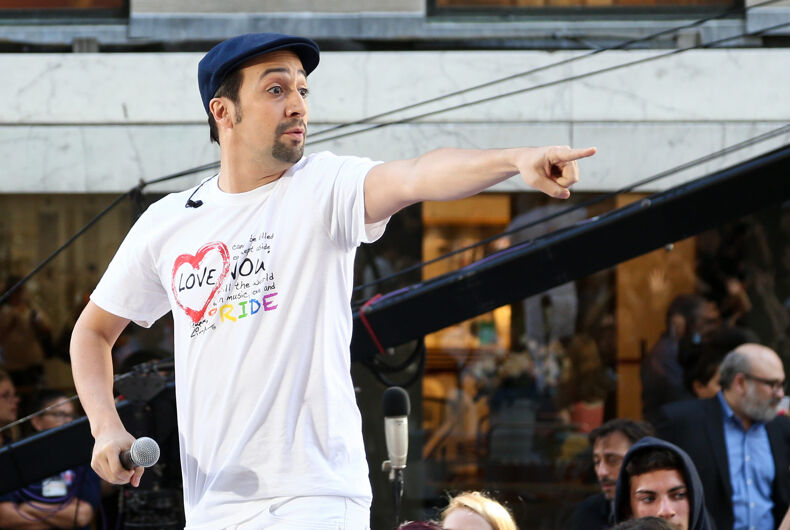 An anti-LGBTQ church in Texas will be making a donation to a local LGBTQ organization even though the church’s pastor considers homosexuality to be a sin like drug addiction.

The church, The Door McAllen — located in the border town of McAllen — will indirectly contribute funds to the South Texas Equality Project, a local LGBTQ support organization. But the church is likely unhappy about it.

That’s because the funds will come in the form of damages that the church is being forced to pay to the creative team of the Broadway hip-hop musical Hamilton. Earlier this month, the church put on an unauthorized performance of the musical which changed and added words to make it more Christian and homophobic.

One of the church’s pastors, Roman Gutierrez, initially claimed that “the Hamilton team” had given the church “the license to perform” their version. But Hamilton’s creators responded by saying that they most certainly hadn’t. Gutierrez has since admitted that his church neither requested nor received permission to stage its altered version of the play.

“We acknowledge there are lawful avenues to obtain a license to stage properties which we did not pursue,” Gutierrez wrote in a public apology posted on his church’s Instagram account. “And it is never permissible to alter an artistic work such as Hamilton without legal permission.”

Gutierrez addressed his apology to the musical’s pro-LGBTQ creator Lin-Manuel Miranda, the show’s producers, and the “numerous others who contributed their intellectual property” to the musical. The pastor promised to destroy all images of his church’s production, to never stage it again, and to pay damages for staging it in the first place.

The comments on the church’s apology have been turned off.

A post shared by The Door McAllen Church (@doormcallen)

A spokesperson for Hamilton told The New York Times that the church’s damages will be used to make a donation to the aforementioned LGBTQ support organization.

The church’s unauthorized version of the play included lines about Alexander Hamilton, one of the U.S. government’s founders and the first Treasury Secretary, accepting Jesus Christ as his personal lord and savior. After the play concluded, church pastor Victor Lopez gave a 15-minute sermon that compared homosexuality to drug addiction.

Lopez’s homophobic sermon was particularly ironic considering that the real-life Hamilton’s own letters suggested that he might have had romantic feelings for his closest male friend. Also, Miranda himself opposes homophobia so much that, in June, he helped launch an initiative to support Florida’s Hispanic LGBTQ community.