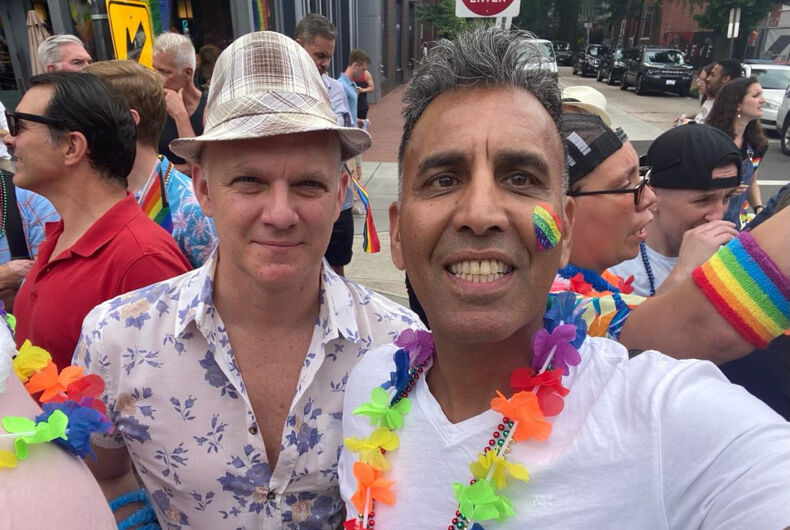 A gay couple who were the victims of an anti-LGBTQ assault are cautioning against racial stereotyping in response to the incident.

According to The Washington Blade, J.P. Singh, Professor of Global Commerce and Policy at George Mason University, and Charles “Chuck” D. Johnson Jr., CEO and President of the Aluminum Association industry trade organization, were attacked in June by a group of young men just a few doors from their home on the 1500 block of T Street, N.W., in Washington, D.C.

The couple described the attack, which police are investigating as a hate crime, in a June 23 Medium post: “On Friday, June 17th, while walking back from the gym at 10 PM and holding hands, a group of young African-American men assaulted us on our street,” they wrote. “JP received a hit to the ear, but no serious injuries. Chuck was not so lucky. The assailants called him ‘fa***t,’ broke his jaw in two places, fractured his thumb, and produced other injuries.”

Singh says that Johnson chased after the initial assailants and was attacked by others who were waiting in a nearby alley.

“We wish to heal emotionally and with compassion,” Singh and Johnson wrote. “When it comes to taking a firm stand on violence, we do not want to stereotype communities or social movements. Instead, we should all unite against all rising cultures of violence in this country.”

Singh tells LGBTQ Nation that he and Johnson were moved to respond to what they perceived as the racialized response to their attack from both conservative and liberal friends. He says they were visited by a reporter from Fox News within days of the assault, and it was in part a fear of the spin the conservative network might put on their story that prompted the couple’s Medium essay.

“There have been a number of assaults in our neighborhood and as an intercultural gay couple, we’re very sensitive to issues of race,” Singh says. Following the attack, Singh says he and Johnson heard from friends who complained that police have been unable or are unwilling to make arrests for these types of crimes due to the Black Lives Matter movement. “And frankly, that just sort of troubled me. In this case, we thought, surely there’s a place to send a more complex and more nuanced message about the culture of violence in which this may be embedded.”

As Metro Weekly reported last week, D.C. has seen a slight uptick in suspected anti-LGBTQ hate crimes this year. Between January 1 and June 30, 2022, there have been 23 reported crimes suspected to be based on sexual orientation, compared to 17 during the same period last year.

In August, another gay couple were attacked in D.C.’s nearby Shaw neighborhood by a group of teens who followed them down the street calling them “monkeypox fa***ts.” Police later released surveillance photos of two young Black men suspected to have been involved in the attack, which is also being investigated as a potential hate crime. Shaw, a historically majority Black area, has seen rapid gentrification in recent years, forcing many longtime residents out of the neighborhood and leading to demographic tensions.

“A lot of us who move into these neighborhoods, we’re coming from a more economically privileged circumstance and because of that and a lot of other factors, we don’t mingle with the people who have lived there,” Singh explains. “So, we know historically that violence happens in neighborhoods where people do not interact with each other. Frankly, there aren’t many forms of interaction between most LGBTQ people and the neighborhoods in which they live and with the people with whom they are living. And that’s our case too.”

Singh says he’s heard those tensions echoed in conversations with friends in the area. “I’m very sorry, but my white gay friends who are complaining about African-American youth know very few of them. [Nor] do I. We’ve got to find ways to interact with our neighbors.”

Still, Singh says he is angry about what he sees as a lack of response from D.C. police. And he also pushes back against calls for restorative justice in this case. He argues that he and Johnson were targeted specifically because they were gay, independent of any other factors, and he would like to see their attackers brought to justice.

He’s adamant however that neither D.C.’s Black youth nor the Black Lives Matter movement be scapegoated for the uptick in violence against LGBTQ people. He points instead to anti-LGBTQ rhetoric in politics and religion, the rise of far-right groups like the Proud Boys, as well as the number of LGBTQ people who were pepper sprayed and attacked during the city’s Pride festivities in June, according to the doctor who treated Johnson.

“I’m not being holier than thou here,” Singh admits. “I don’t know many African-American youths. I don’t interact with many of my neighbors. But this incident made us reflect on how, sure, we were assaulted, but there are broader themes here.”