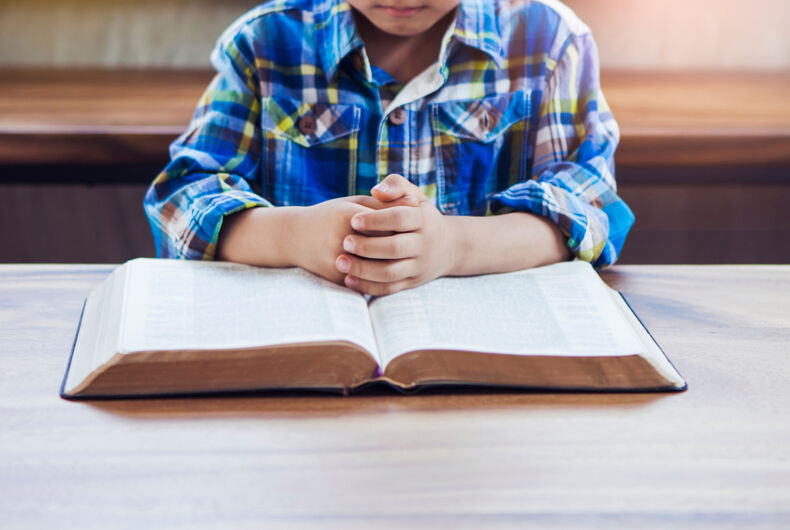 A Christian pastor was told that he and his wife had to denounce their transgender son in order for him to keep his job as a Christian camp director. Instead, he and his family packed up their bags and moved to New Zealand.

Chris Kinman got his dream job as an assistant director and then as a director at the nondenominational camp in the Pacific Northwest that both he and his wife, Lindsay, attended as children. Lindsay started working as a midwife in the nearby town.

Their son Jay, who was assigned female at birth, had yet to come out as transgender. He was a young evangelist, trying to convert his friends at school.

“He came home from school one day and said, ‘Dad, I’ve been praying for my friends to become Christians. And on the bus home today, they prayed and now they’re Christians,'” Chris told Baptist News.

So working at the camp was a natural fit for Jay, even though he had been showing signs of gender dysphoria for years. As a toddler, he would always play the role of boys when playing. He insisted on being called a prince instead of a princess and would paint mustaches on his face.

His parents thought he was “just a tomboy.”

At age 10, Lindsay recalls Jay having a meltdown when being forced to wear a dress for a mother-daughter social.

“It was very out of character, she. I asked him to put his dress on, and it made him come undone in a way I had never seen. In the car, I stopped and pulled over and looked at Jay and I committed the sin of all sins: I groomed my child. I said, ‘Do you think you were born in the wrong body?’”

She said Jay told her the answer he thought she wanted to hear: “No, Mommy, God doesn’t make mistakes.”

Jay came out as a lesbian as a teenager, and his parents asked him to keep it quiet. Their jobs depended on their image as good Christians.

“You know what this will do to your dad’s job,” Lindsay recalls saying. “We just needed to keep it quiet. There’s no reason to be talking about sex or sexuality.”

She later regretted forcing her kid into the closet, putting the pressure of the family’s financial well-being on a child and forcing him to be someone he wasn’t.

When he was 17, someone started outing him as transgender, and he eventually came out to his parents. But by then the community knew, and churches in the area – some of whose members had kids who attended the camp – were calling Chris in for hearings.

“They got their hackles up and were saying you can’t be gay or trans and be a Christian. They said, ‘If you’re going to have gay people at your camp, we’ll have to pull out,’” he said.

Churches started hosting meetings to discuss the Kinmans. Others called them in for disciplinary hearings, even though they weren’t associated with those churches.

Lindsay said that people from the town were walking in on her midwife duties to talk to her about her transgender son. “I would be in the middle of a birthing, and they would want to pray for me,” she recalled.

Then the camp board of directors turned on Chris. They sent him a letter asking him to resign but telling him that he could stay on if he wrote a public statement denouncing his own son.

Chris applied for jobs all over the state, but he couldn’t find work. The Kinmans started looking for work in other places where Lindsay’s midwife license would be valid, and they found New Zealand.

Jay stayed in the U.S., where he was already attending college and transitioning. He had left the church as a result of the attacks.

The Kinmans say it’s hard to be so far from their son, but they’re glad to see that he’s following his path.

‘I’m finally starting to see him again,” Lindsay said. “He’s back to himself.”