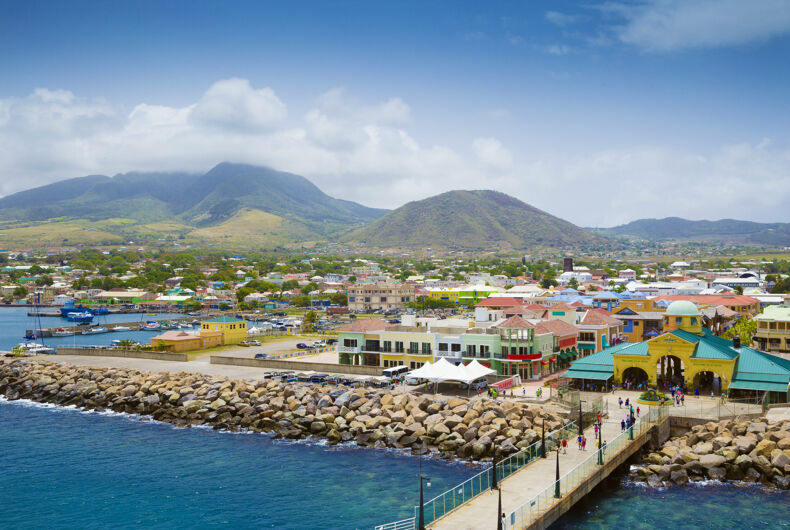 In a major advance for LGBTQ rights in the Caribbean, a court for Saint Kitts and Nevis struck down a colonial-era law that banned the “abominable” crime of “buggery”.

The Offenses Against the Person Act, imported from England with the colonization of the island nation, criminalized “unnatural offenses” and carried a maximum penalty of 10 years with hard labor.

The Eastern Caribbean Supreme Court struck down two offending sections of the act.

One read: “Any person who is convicted of the abominable crime of buggery, committed either with mankind or with any animal, shall be liable to be imprisoned for a term not exceeding ten years, with or without hard labor.”

Judge Trevor Ward wrote in the decision: “The absolute nature of the prohibition created by sections 56 and 57 are not reasonably justified in a democratic society in circumstances where they proscribe sexual acts between consenting adults in private, which involve no element of public conduct or harm to, or sexual acts, with minors.”

“To the extent that it criminalizes the private lives of gay persons in this year, the law is excessive and arbitrary.”

The court’s verdict was effective immediately.

The complainant was Jamal Jeffers, a gay resident of the island, who brought the constitutional challenge in January 2021 and was joined by the advocacy group St. Kitts and Nevis Alliance for Equality.

“This is a transformative journey and a step to full recognition of LGBTQ persons across the Organization of Eastern Caribbean States,” Kenita Placide, executive director of the Eastern Caribbean Alliance for Diversity and Equality (ECADE), said.

“An affirmative decision means a yes to privacy and a yes to freedom of expression.”

The Saint Kitts and Nevis decision is the latest victory in a wave of liberalizing changes in the Caribbean.

The same court overturned sodomy laws in Antigua and Barbuda this summer, while in Barbados, which formally became a republic in 2021 after casting off the Queen of England as head of state, the prime minister publicly committed to advancing LGBTQ rights.

“We are witnessing a historic moment in the Caribbean in which antiquated, colonial-era laws are being challenged and struck down,” said Maria Sjödin, executive director of global LGBTQ rights group OutRight Action International.

“We are awed by the strategic persistence of activists in the region who are leading the charge to ensure that human rights are advanced and that discriminatory, outdated laws like this are overturned. Hopefully, the remaining countries in the region and beyond will follow.”