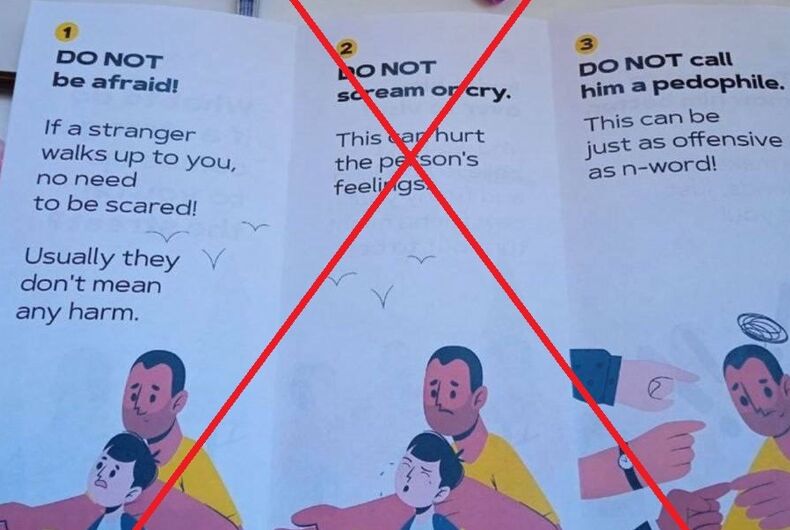 An image of the fake pro-pedophile pampletPhoto: Twitter screenshot

A video posted this month by the far-right anti-LGBTQ Libs of TikTok Twitter account has since spread among anti-LGBTQ Russian and European disinformation networks, effectively furthering the anti-queer agenda of Russian President Vladimir Putin. The account’s founder has pledged to do even more to threaten LGBTQ lives in the future.

On August 10, Chaya Raichik, who goes by LibsofTikTok on social media, posted a video of a therapist who works with jailed sex offenders. In the video, the therapist announces their pronouns and advises people to use the term “minor-attracted persons” (MAPs) rather than “pedophiles.” They said the latter term has “moved from being a diagnostic label to being a judgmental, hurtful insult that we hurl at people in order to harm them or slander them.”

Indeed, the Libs of TikTok account itself has regularly accused pro-LGBTQ teachers of being “groomers” and has called the youth anti-suicide organization The Trevor Project a “grooming organization.” Grooming is a term for gaining the trust of a child so you can rape them. The term has since become a common anti-LGBTQ slur. Gay men were frequently accused of being pedophiles by the religious right although that accusation had faded over the years.

The therapist also said that MAPs are among the most vilified people in society, and added that most of them don’t choose their attraction to underage people. The therapist said that MAPs shouldn’t be solely defined by that one aspect of themselves.

Raichik only posted the first two minutes of the therapist’s presentation, which made it seem like they were advocating for people to be nicer to child sex abusers. However, Vice News reported that, in the full archived version of the video, the therapist unmistakably condemns such crimes. The therapist has since gone into hiding after Raichik posted the video.

After Raichik posted it, “major Russian disinformation networks on Telegram, some with hundreds of thousands of followers, began sharing it” alongside images of a fake leaflet that had gone viral on Russia’s social network Vkontakte.

The fake leaflet, which local St. Petersburg news organizations claimed had been found in the U.K. by a Russian tourist, was entitled, “What to do if a stranger comes up to you on the street.” It advised children to stay silent if a stranger approached them in public, not to call them a “pedophile,” and to invite the strangers back to their homes.

Polish fact-checkers questioned the leaflet’s authenticity, noting that its original social media sharer neither disclosed any details about where the leaflet was found nor of the Russian tourist who allegedly found it. The leaflet uses the American-English spelling of “pedophile” (not the British-English “paedophile”), it contains no logos or credits atrributing its creator, and only four photos of the brochure exist with no other copies being found.

Russian disinformation channels, including Russian state media, are picking up on anti-LGBTQ content produced by LibsOfTikTok and amplifying it to non-English-language audiences worldwide to massive success.

We found this out because of some pictures of a leaflet. pic.twitter.com/fW6V2bqOwD

Tsargrad TV’s article said the leaflet was evidence of Western culture’s “moral decay,” and added, “It is worth noting that the promotion of the legalization of pedophilia in the West is not an isolated incident, but a deliberate vector of the hard work of perverted lobbyists. We in Russia do not need such ‘values’ — violence against our children is categorically unacceptable.”

Russian and European social media users combined mentions of Raichik’s video along with news of the leaflet to create an emotional argument against LGBTQ-inclusive “groomers.” One message, shared on a Telegram channel with 180,000 followers posted the video and leaflet images and declared, “This is definitely not a fake.”

Libs of Tik Tok received a seven-day no-posting suspension from Twitter after falsely claiming that the Children’s National Hospital in Washington D.C. was performing hysterectomies on transgender children — her claim led to harassment, bombing and death threats against hospital workers. Libs of TikTok has also been suspended multiple times on multiple platforms, including Instagram, Facebook, and Twitter, Media Matters reported.

Despite the slap on the wrists, Raichik recently pledged on her Substack newsletter to do even more to endanger hospitals that provide gender-affirming care to trans youth.

“Any sane person realizes that mutilating children for gender affirmation is barbaric,” she wrote, pushing the lie that gender-affirming surgeries are performed on children. They are not.

“Any doctor performing these surgeries should have their license revoked. They belong in prison,” she continued. “But alas, they are celebrated while Twitter and the media are running cover for them. Getting suspended by Twitter has only made me realize my biggest mistake. I only called one hospital I should have called dozens because I promise you Children’s National is not the only one. I promise to learn from my mistake and uncover more of what our Big Tech overlords don’t want us to know. I will do better in the future.”

BREAKING: In a rant posted to her Substack, Chaya Raichik responds to Twitter suspending her account Libs of TikTok by alleging a sinister conspiracy in gender affirming healthcare, promises to redouble her dangerous harassment campaign against hospitals if unbanned. pic.twitter.com/rbucHFklxY

There’s proof that Libs of TikTok’s posts result in real-life threats against queer people and their allies. Raichik’s posts on all-ages drag shows have compelled Proud Boys and other forces to angrily confront LGBTQ parents, their children, allies, and drag performers in public, taking their pictures, and sharing their identities on social media.

Caribbean court strikes down ban on “abominable crime of buggery”