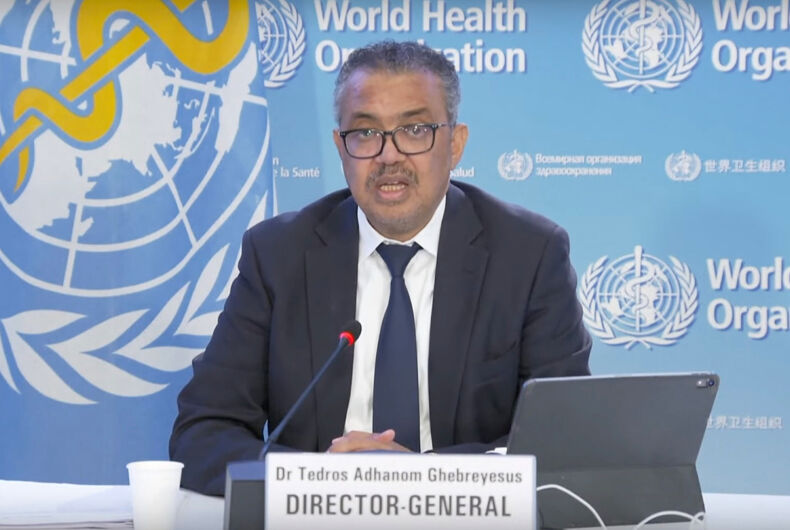 The World Health Organization is calling on men who have sex with men to reduce the number of their sexual partners to help slow the spread of monkeypox.

At a briefing on Wednesday, WHO director general Tedros Adhanom Ghebreyesus urged countries around the world to “take the steps needed to stop transmission.”

“For men who have sex with men, this includes for the moment, reducing your number of sexual partners, reconsidering considering sex with new partners, and exchanging contact details with any new partners to enable follow up if needed,” Ghebreyesus said. “The focus for all countries must be engaging and empowering communities of men who have sex with men to reduce the risk of infection and onward transmission, to provide care for those infected, and to safeguard human rights and dignity.”

At the same time Ghebreyesus cautioned against “stigma and discrimination” related to the outbreak. He noted that while 98% of monkeypox cases outside of countries where the disease is endemic have been among men who have sex with men, “anyone exposed can get monkeypox.”

“This doesn’t have to be a permanent change,” Mateo Prochazka, an infectious disease epidemiologist with the U.K. Health Security Agency, said of the WHO’s suggestion, “but it could be a short change while we wait for the vaccine to kick in at the population effect and to make sure that we’re protected as a community. Then again, it’s always going to be a personal choice.”

In the U.S., where nearly 3,600 cases have been reported, the response to the outbreak has been marred by limited vaccine supplies and government inaction. Earlier this week, it was reported that the U.S. missed an opportunity to contain the spread of monkeypox by sitting on 300,000 doses of a vaccine that were ready to be shipped from a facility in Denmark. Meanwhile, cities like New York, San Francisco, and Washington, D.C., struggled with the initial roll-out of the limited vaccine supply.

Meanwhile, far-right conservatives like Marjorie Taylor Green have already begun to stigmatize the disease with outlandish claims due to the outbreak amongst gay and bisexual men.

She ran the Nevada Republican Party. She just endorsed Democrats for the next election