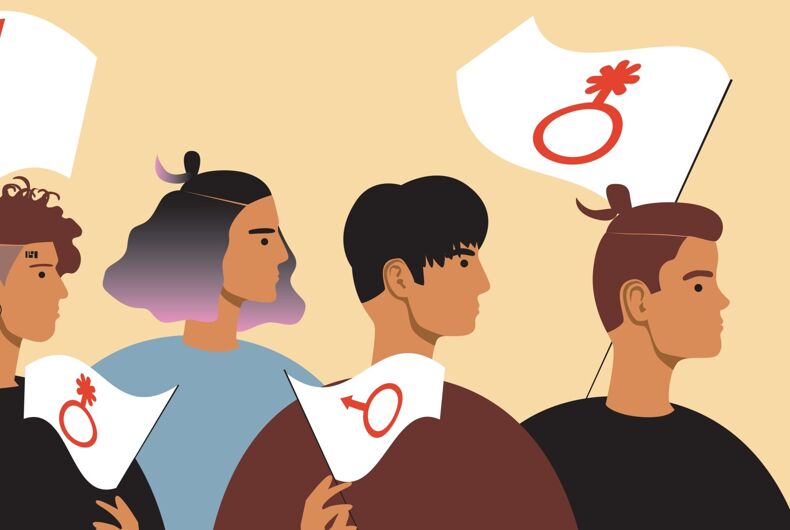 While some members of the LGBTQ community may be familiar with the term, “genderqueer” isn’t as well-known in society at large. So, what does the term “genderqueer” mean and how is it different from other identities it’s often confused with?

Read on to learn more about the term, its origins, and what it means to be genderqueer.

What Does Genderqueer Mean?

Many genderqueer people have different explanations of what the term means to them. But, in the general sense, genderqueer is a gender identity that falls outside the categories of male and female. Some may define it as their gender belonging somewhere in the middle of the gender binary, while others are beyond the binary completely.

The origins of the word “genderqueer” are unclear, although it is believed to have been used as early as the 1980s during the rise of queer zine culture. Back then, queer writers and activists were challenging the notions of gender and wanted a term that existed beyond the gender binary.

It’s important to note that not every genderqueer person uses they/them pronouns, so it’s best to ask them what pronouns to use.

Genderqueer vs. Nonbinary: What’s The Difference?

The distinction between the terms “genderqueer” and “nonbinary” may be confusing, as these two terms have a lot of overlap with each other. Both are terms for transgender identities that do not simply exist between “male” or “female”, and both are considered to be umbrella terms like the term “transgender”.

However, although they both have a big overlap, genderqueer and nonbinary identities are still separate from each other. Some nonbinary people do not consider themselves genderqueer or vice-versa, so it’s best to ask first if you’re unsure.

Additionally, while the term “genderqueer” largely refers to a gender that does not exist on binary terms, some consider it to mean “beyond mainstream perceptions of gender”, which some nonbinary people might not identify with.

Agender, demigender, genderfluid, and bigender all fall under the genderqueer umbrella. Gender non-conformity and androgyny are not necessarily part of being genderqueer, but some choose to express their gender in an androgynous or non-conforming way.

Although the genderqueer identity falls under the transgender umbrella, it does not mean these two terms are the same.

Not every genderqueer person has the same experience – some present themselves in an androgynous or gender non-confirming way, while others present either more masculine or feminine. Some socially and medically transition, others transition only socially, and some don’t even “transition” in the social or medical sense.

Even though no two people experience the genderqueer identity the same way, there are still common struggles within the community – namely, the challenges that come with identifying outside the mainstream notions of gender. Not being able to fully present as genderqueer because of gender norms and stereotypes can be confining, but it happens often in societies that aren’t accepting of gender non-conformity.

It’s important to know what right terminologies to use, especially as more “niche” communities, like the genderqueer community, grow in both number and visibility. Do your own research and respect people’s identities and pronouns – this will help you become a better ally, no matter how you identify.