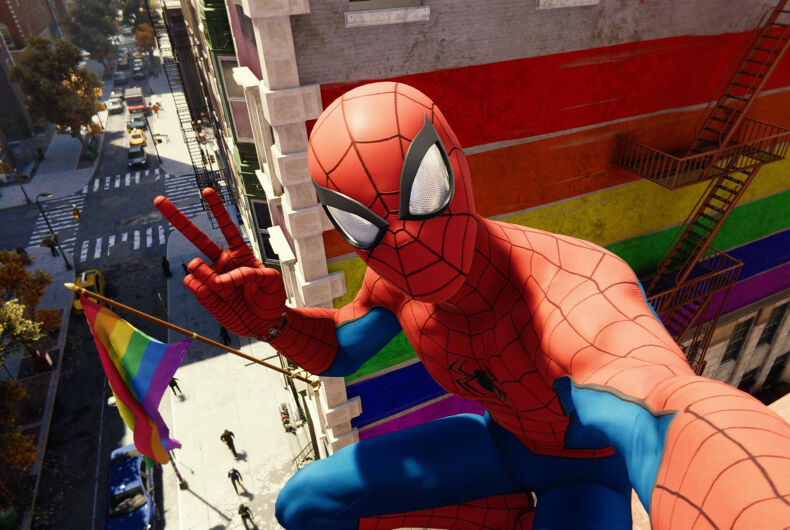 Anyone who saw 2018’s Spider-Man: Into the Spider-verse is well aware that Marvel’s multiple realities are jam-packed with a dizzying array of Spider-persons of all shapes, sizes, races, genders, and species. So, the comic book giant had to eventually introduce a gay version of the web slinger, right?

Related: Spider-Man could be bisexual in an upcoming Sony movie

The character will make his first appearance in September’s fifth issue of Edge of Spider-Verse. From what the Eisner award-nominated Foxe has said on Twitter, it sounds like Web-Weaver will be an unapologetically fab and femme superhero.

“Something I realized immediately when conceiving Web-Weaver is that he can’t–and shouldn’t–represent ALL gay men. No single character can,” Foxe wrote in a tweet earlier this week. “His fearlessly femme identity is central to who he is, but it’s not the STORY…which you can experience for yourself in September!”

Marvel’s official description of the character calls him a “not-so-mild mannered fashion designer” whose spider-powers allow him to show us “a very different kind of Spider-Slayer.” Don’t ask us what a “Spider-Slayer” is, but judging from his costume, Web-Weaver definitely slays!

from the jump, I looked at a lot of McQueen and Mugler for this as inspiration. I cast a wide net for the original designs while also looking at new and unique spiders that @steve_foxe has recommended, which eventually paired down to this look

Comic artist Kris Anka designed the character’s look and described some of his high fashion influences on Twitter. “I looked at a lot of McQueen and Mugler for this as inspiration,” he wrote. “I cast a wide net for the original designs while also looking at new and unique spiders that @steve_foxe has recommended, which eventually paired down to this look.”

It’s clearly too early to start speculating whether Web-Weaver could make it into a future Spider-Man film, but it is not totally out of the realm of possibility. At least two actors who have played the hero have said they’re open to more queerness in the movies.

“The world isn’t as simple as a straight white guy,” Tom Holland told The Sunday Times in 2019. “It doesn’t end there, and these films need to represent more than one type of person.”

And in 2013, Andrew Garfield told Entertainment Weekly that he’d questioned the character’s sexuality. “Why can’t we discover that Peter is exploring his sexuality?  It’s hardly even groundbreaking!… So why can’t he be gay? Why can’t he be into boys?”

There were even rumors ahead of last year’s Spider-Man: No Way Home that one of the three Spider-Men featured in the film could be depicted as bisexual.

What’s the definition of genderqueer?