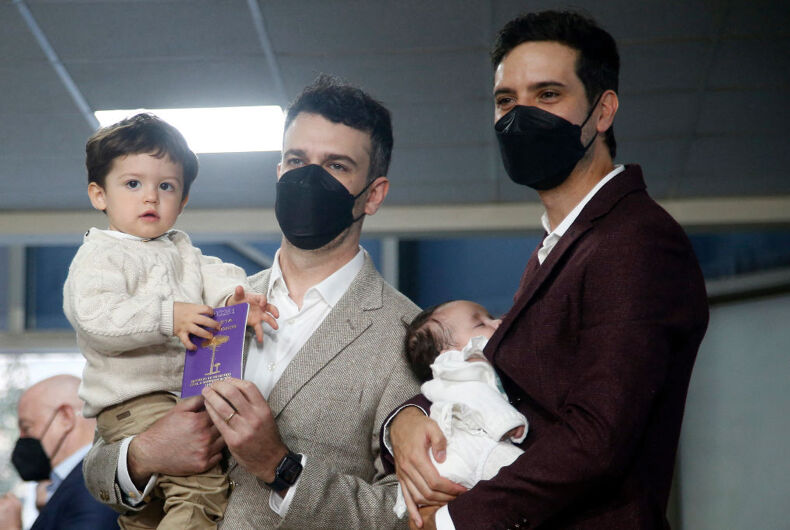 Same-sex newlyweds Jaime Nazar (L) and Javier Silva (R) pose after their wedding in Santiago on March 10, 2022. - Two couples of women and men celebrated on Thursday the first equal marriages in Chile, where the law passed at the end of 2021 came into force after years of struggle by various organisations defending the rights of the LGTBQ community. (Photo by CLAUDIO REYES / AFP) (Photo by CLAUDIO REYES/AFP via Getty Images)Photo: AFP via Getty Images

On June 15, lawmakers in Thailand gave a “surprise nod” to a bill that would establish full marriage equality in the country. Less than a week later, a district court in Japan ruled that a ban on same-sex marriage did not violate the country’s constitution. This, despite the court acknowledging that legal recognition of same-sex marriage would “bestow dignity on those relationships”.

Related: 5 key facts about the history of Pride

In the light of these conversations, LGBTQ Nation dives into some recent global discussions on marriage equality.

Marriage equality around the globe

According to the Human Rights Campaign Foundation, 31 countries around the world have legalized same-sex marriages. The most recent include Chile and Switzerland.

Conversations around marriage equality started in Chile in 2004, when Karen Atala Riffo, a Chilean judge knocked on the doors of the Inter-American Court of Human Rights (IACHR) having lost the custody of her three daughters due to a ruling by the Chilean Supreme Court. Atala Riffo, who had separated from her husband in 2001 and retained custody of her three daughters, came out as a lesbian in 2002.

Her ex-husband sued for custody and the country’s top court ruled in his favor. According to the court, the development of the three daughters was at risk owing to her relationship with her same-sex partner.

Atala Riffo appealed to the IACHR, and the IACHR observed in its 2012 ruling that the supreme court had violated her fundamental rights. Further, the IACHR ruling asked Chile to “uphold the mother’s parental rights and the rights of children not to experience discrimination based on their parents’ sexual orientation and gender identity.”

Following the IACHR ruling, a civil union law was passed in 2015 that provided legal recognition to same-sex couples, but did not extend full social rights, including rights to parentage and adoption.

In 2020, the Swiss parliament passed a marriage equality bill, but it was challenged by the opposition through a referendum. Disappointing the right-wing opposition, the Swiss people voted for legalizing same-sex marriages in the country. As a result, same-sex couples in Switzerland, starting July 1, are able to marry in civil ceremonies and jointly adopt children, and lesbian couples will be able to access sperm donations.

At the time of writing this report, marriage equality and civil partnership are under legislative or judicial consideration in countries like Thailand, India, and Italy.

In Thailand, the vote that favored the marriage-equality bill might be akin to opening “the first door toward marriage equality rights,” LGBTQ rights activists have noted. The bill is supposed to now go for amendments and return to the parliament for a vote.

Meanwhile, the Thai parliament has passed a civil partnership bill, which recognizes civil unions of same-sex couples, but does not extend the full set of rights afforded by heterosexual couples.

In the case of India, marriage equality is under both judicial and legislative consideration. The Delhi High Court, for example, is currently hearing several petitions for extending full marriage equality to same-sex couples. The Indian government, however, has asked for a dismissal of these petitions highlighting “age-old customs, rituals, practices, cultural ethos and societal values.”

Further, the Indian government has also told the court that any “interference with the existing marriage laws would cause complete havoc with the delicate balance of personal laws in the country.” Similar arguments about marriage equality destabilizing traditional family structures have also been made by governments in American and South African courts.

This issue in India may be complicated given the fact that the country has six personal and marriage laws that function at the federal level. Then, there are state and union-territory-specific laws.

The government submitted the draft to the Law Commission of India (LCI), which in 2018 opined that such a civil code is “neither necessary nor desirable at this stage.”

In April this year, Supriya Sule, a member of the parliament from the National Congress Party in India, floated a bill to amend the Special Marriage Act 1954 to extend marriage equality to “any two persons of same sex.” However, the bill has been criticized for leaving out “transgender, gender non-conforming, agender and intersex persons.”

Italy’s journey towards marriage equality began in 2015, when the European Court of Human Rights (ECHR), ruled in Oliari and ors vs Italy that member states were obliged to extend legal recognition to same-sex couples. The ECHR has jurisdiction over 47 member states, including Italy and Russia.

In 2016, Italy passed its civil unions bill, that provided legal recognition to same-sex marriage. However, the bill fails to provide parenting and reproductive rights to same-sex couples.

In April, senator Allesandra Maiorino introduced a bill for extending full marriage equality. Extending marriage equality in Italy becomes murky given the country’s historic association with the Catholic church. According to the Catholic doctrine, homosexuality is a sin – a position that Pope Francis has reiterated, despite being seemingly progressive about LGBTQ rights.

In 2021, for example, the Vatican opposed an anti-homophobia bill that intended to criminalize discrimination against queer and disabled persons, and women, as a crime. The Italian Senate, finally, decided to not vote in favor of the bill.

In April 2021, Russian President Vladimir Putin signed several constitutional amendments, some of which banned same-sex marriage and the rights of transgender persons to adopt children. Previously, in 2013, Putin had okayed a law that forbade “pro-LGBTQ ‘propaganda’ to minors under the age of 18.” This law was used to target “everything from Pride parades to carrying a pink iPhone case in school.”

In July 2021, the ECHR ruled that Russia’s 2021 ban on same-sex marriage violated the European Convention of Human Rights.

Will the Russian government take back the ban? Seems unlikely, says a report from Amnesty.org.