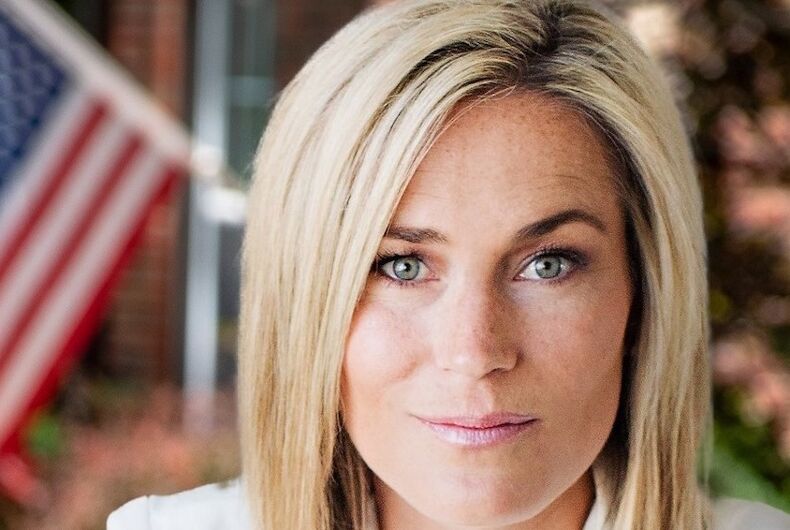 You would think that if Republicans were going to field a socially moderate candidate anywhere, it would be in the blue states on the West Coast. But as the leading candidate for the Republican nomination for Senate in Washington state proves, that’s not the case at all.

Tiffany Smiley is a political novice who has the backing of the GOP party leadership. A former nurse whose husband was blinded on deployment in 2005, Smiley fought against what she called “Army protocols and the federal bureaucrats” to advocate for her husband, launching a career as a veterans’ advocate against the “unreliable VA system.”

Smiley parlayed her advocacy into a speaking career, appearing in mainstream media outlets like CBS News and People magazine. She also counts the anti-LGBTQ hate group Focus on the Family among the “media organizations” to which she has contributed as a speaker.

That’s not a surprise, knowing Smiley’s close relationship with the Graham family. Her husband Scott met Edward Graham, the youngest son of Franklin Graham, during their first year at West Point. The Smileys social media accounts are littered with photos of and praise for the Grahams, including Franklin Graham.

Of course, Franklin Graham is one of the leading anti-LGBTQ voices on the religious right. Graham has been calling for “regime change” in the U.S. because trans rights are “evil” and “wicked.” He’s complained that Pope Francis is trying to “normalize homosexuality.” He even cited a Biblical verse calling for death for homosexuality when talking about out Secretary of Transportation Pete Buttigieg.

These aren’t exactly the kind of views that are popular in Washington state. Indeed, when Graham hosted a “law enforcement appreciation” dinner for the Seattle Police Department last year, the department refused to attend, saying that it is “committed to the equality of our community’s LGBTQ members.”

In case there’s any doubt about Smiley’s affinity with Graham’s viewpoint, her tweets clear them up. When Graham was calling for a boycott of Target for instituting gender-neutral language in its stores, Smiley was right there with him, retweeting his attacks, including this one:

I have news for @Target and everyone else, God created two different genders. #OffTarget http://t.co/NVNl6X4lGC

That will take some explaining to voters in the liberal part of Washington.

Smiley has an uphill battle against incumbent Sen. Patty Murray, who has held the seat for 30 years. Polls show Murray with a strong but not overwhelming lead. What Murray does have in her favor is fundraising, raising nearly three times as much as Smiley.

Meanwhile Smiley is still largely unknown. Murray has been running ads defining Smiley as “Mitch McConnell’s handpicked candidate,” showing a photo of Smiley posing with Donald Trump and quoting her campaign site raising questions about the integrity of the 2020 election.

In short, Murray is defining Smiley before Smiley is.

The other thing Democrats have in their favor is, unfortunately, the Supreme Court’s decision to overturn Roe v. Wade. Smiley’s hopes for victory would have to rest on mediocre voter turnout in western Washington, which is where most Democrats – and indeed, the majority of voters – reside.

Last month’s ruling changed the political dynamics of the midterms, as infuriated Democrats look for someplace to show their anger. The ballot box is the obvious place.

That won’t help Smiley, and she seems to know it. When the Supreme Court ruling came out, she was notably silent. Her tweet that day was about homeless encampments in Seattle.

When she finally got around to issuing a press release three days after the ruling, her argument was simple: the real problem is that gas prices are high.

Nice try at distracting from the issue, but it still leaves the question about what exactly Smiley’s own views are and how much they track with the anti-LGBTQ folks she likes to hang out with.