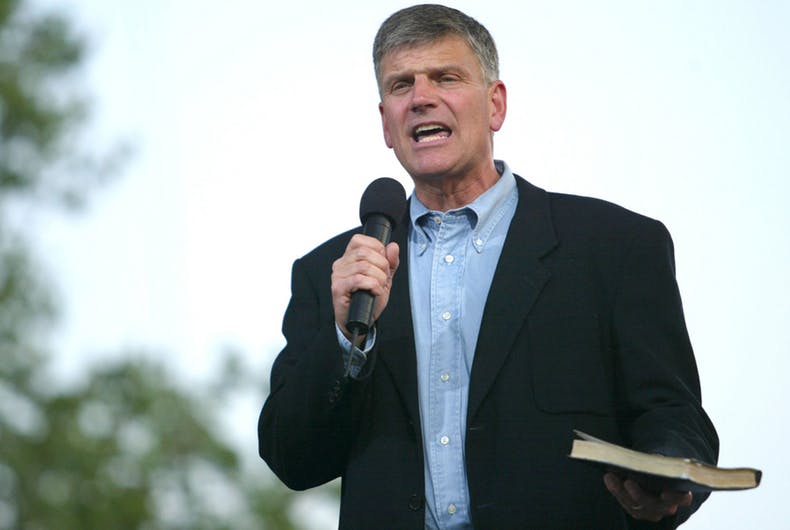 Franklin Graham – the son of Billy Graham and one of the most famous and powerful Evangelical leaders in the country – spent the weekend railing against transgender people and demanding “regime change” in the U.S. because, he said, the Biden administration is “evil” and “wicked.”

One of them was a paper released by Assistant Secretary for Mental Health and Substance Use Miriam Delphin-Rittmon that explained why gender affirming, evidence-based health care for transgender youth is important and lifesaving. The paper did not discuss surgery since gender affirming surgery is not performed on minors.

“This is vile,” Graham said in response on his popular Facebook page. “It’s one of the most wicked initiatives that we’ve seen come out of Washington. President Biden’s Democratic administration is endorsing sex-change operations and hormone treatments for children.”

“Mutilating bodies and removing the genitalia of children is permanent,” Graham ranted about the paper that said that affirming a child’s gender can reduce depression, drug use, and suicide risk. “All of their manipulated research saying that it improves mental health or increases happiness is just a lie from hell. What it really does is destroy the lives and futures of these children.”

Graham called transgender equality an “evil agenda” that “followers of Jesus Christ must stand against.”

Then he called for “regime change,” an expression that usually refers to removing the government of a country and replacing it with another through military force.

“Speaking of regime changes — we need one in this country,” he wrote.

On Saturday, Graham joined the chorus of conservatives calling for a boycott of Disney because the company spoke out against Florida’s “Don’t Say Gay” law, which bans the mention of LGBTQ people in elementary school and limits it in other grades.

“Disney is indoctrinating children with the LGBTQ agenda — and they don’t even try to hide it,” he wrote, linking an article about “10 families who are swearing off Disney due to its left-leaning politics.”

“I certainly hope parents wake up to what Disney is trying to do and protect their children and grandchildren from the lies this once-great company is now so willing to promote.”

On Sunday, Graham reposted video of North Carolina Lt. Gov. Mark Robinson’s (R) infamously hateful rant about the transgender equality movement, which he called “demonic” and “full of the spirit of Antichrist.”

“This preacher is our NC Lieutenant Governor Mark Robinson” was the entire caption Graham wrote for the video as he shared it on Facebook, getting it over 150,000 views.