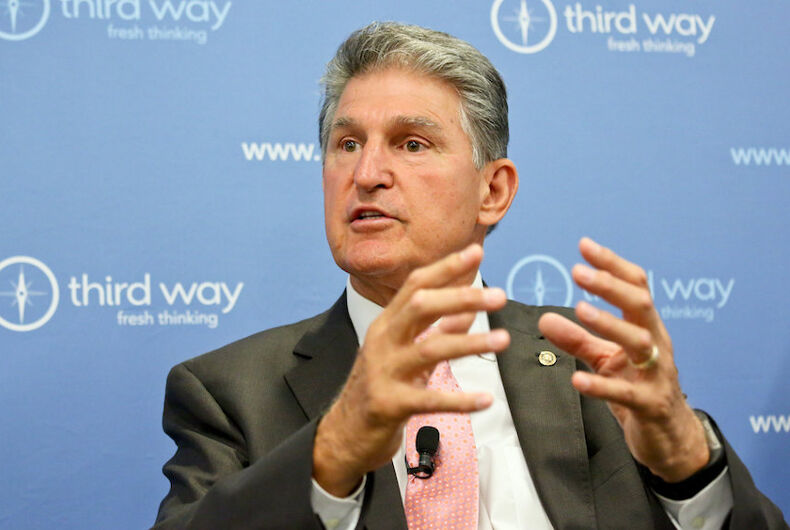 Under normal circumstances, when a senator spends months negotiating legislation to his liking with his own party, the result will be a compromise measure that gets everyone a little of what they want. But when Sen. Joe Manchin (D-WV) is involved, the result is ashes and the demise of his president’s agenda.

In a dramatic move meant to show how powerful he is, last week Manchin blew up months of negotiating on climate change legislation because of July inflation numbers, putting a single month’s economic report over an existential threat to the planet.

Of course, with Manchin, he hardly needed an excuse, because he has a long track record of blowing up Biden’s agenda for the sake of enjoying the attention he gets as a result. He has repeatedly proposed paring down proposals to reduce dependency on fossil fuels, only to refuse to back the legislation with his own changes. He insisted on shrinking the price tag on Biden’s Build Back Better legislation until he decided he didn’t like his own suggestion and blew that up. In short, Manchin never met one of his own proposals that he didn’t eventually disavow.

In the process, Manchin has essentially dealt a death blow to the ambitious domestic agenda that Biden proposed when he took office. He had a lot of help in that project from fellow wrecking ball Sen. Kyrsten Sinema (D-AZ), who is equally in love with all the attention from lobbyists that her ability to destroy the Biden presidency attracts.

Manchin now holds the same low level of regard among Democrats that Ted Cruz holds among Republicans. In an institution that still prides itself on the trappings of decorum, his fellow Democrats did not hold back in their fury at their colleague.

Manchin is “intentionally sabotaging the president’s agenda, what the American people want, what a majority of us in the Democratic caucus want. Nothing new about this,” Sen. Bernie Sanders told ABC “This Week.” “And the problem was that we continue to talk to Manchin like he was serious. He was not.”

Sanders’ public anger is apparently widely shared among less progressive Democrats in the Senate. Blowing up months of painstaking negotiations clearly indicates that Manchin was never negotiating in good faith. His word is essentially worth nothing.

The same can’t be said for Manchin. He’s quite wealthy, and his wealth comes from one of the dirtiest fuels around, coal. He founded a coal brokerage business valued in the millions, raking in more than $536,000 from the firm last year alone. “Manchin is a walking conflict of interest,” Craig Holman, a lobbyist for the liberal watchdog group Public Citizen, told CNN.

Perhaps the bigger problem is the level of expectations that the Biden administration set for itself. From the outset, the administration had an ambitious agenda–a huge infrastructure package, climate change legislation, and a voting rights bill. What it didn’t have was the votes to back most of its ambitions up. The Senate is split 50-50, with Vice President Kamala Harris casting the deciding vote in a tie.

But the theoretical majority was never real. It only takes one Senator to gum up the works. With 50 giant egos at work, it was entirely predictable that something was bound to go wrong.

Meantime, the president’s actual accomplishments–which are substantial–are getting buried under a barrage of headlines about his failed agenda. In fact, Biden did get some important legislation through Congress, including an infrastructure bill and amazingly enough modest gun reform legislation. The Senate approved his choice of Ketanji Jackson Brown as the first black woman to serve on the Supreme Court and Pete Buttigieg as the first out Cabinet member.

But there’s only so much the president can do if Congress won’t back him up. Manchin comes from a state that voted for Donald Trump by a better than two-to-one margin in 2020, so there are no consequences to him for tearing down Biden. There will be consequences for the party, however, and Manchin may not like being in the minority if Republicans take over. Then again, maybe he can trick the GOP into thinking he’s the swing vote they need for a bipartisan veneer.

Whatever Machin needs to do to keep in the press, no doubt he’ll be doing it.

Charles Barkley: “If you’re gay or transgender, I love you”