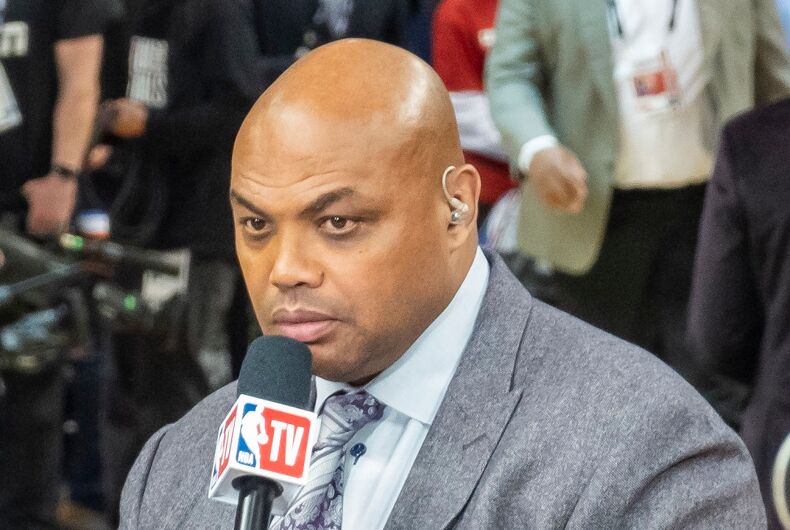 A video of NBA legend Charles Barkley pledging his support for the LGBTQ community has gone viral. The clip shows the 59-year-old 11-time NBA All Star onstage telling a crowd that, “If you’re gay or transgender, I love you.”

“And if anyone gives you any shit, tell ’em Charles says f**k you!” Barkley continues, to applause.

The video, originally posted to TikTok by user I.­ banana, appears to have been taken earlier this month at Harveys Lake Tahoe, a casino located in Stateline, Nev. It made its way onto Twitter over the weekend, where it quickly spread, garnering praise for Barkley’s comments.

It's the things like this that set certain stars above all the rest. This means so much to so many people. JFC ♥️😭

This isn’t the first time Barkley has stated his support for the LGBTQ community loud and clear.

During a 2013 interview on The Dan Patrick Show, he expressed support for out NBA player Jason Collins. “Everybody’s played with a gay teammate,” he said at the time. “As a Black man, I’m always inclusive.”

In 2016, he spoke out against North Carolina’s infamous bathroom bill, which would have barred transgender people from using public restrooms that corresponded with their gender identity. He even went so far as to call for the NBA’s 2017 All-Star Game to be relocated from Charlotte, North Carolina.

Discussing his stance in a 2020 interview on Ellen DeGeneres’s talk show, Barkley said, “I think anytime you’re Black, you got to stand up for other people because you – Black people know what discrimination is like. And if you’re in a position of power, you got to always stand up against discrimination. And I’m blessed man, and… I’m never gonna sit back and let discrimination happen on my watch.”