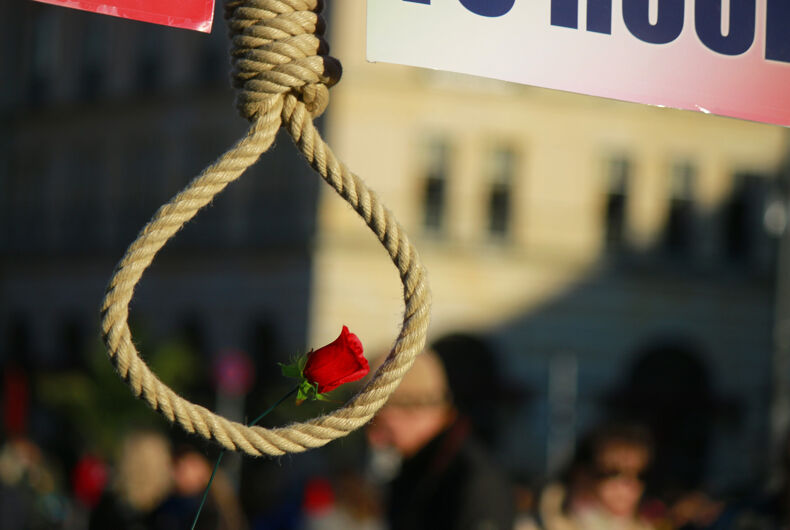 Iran executed a gay man, Iman Safavi Rad, last Wednesday on homophobic charges of “sodomy.” His killing was at least the third anti-gay execution to occur in the country in 2022.

Rad was identified as gay by Dr. Kazem Moussavi, an Iranian dissident who spoke to The Jerusalem Post. Rad’s execution took place in the Rajai Shahr Prison within Karaj, the capital of the northeastern Alborz province.

Related: Iranians are wearing Pride flags in public to protest the brutal beheading of a gay man

The man’s execution was one of 10 that took place at the prison last week, according to the Human Rights Activist News Agency. The other executed people had been accused of rape and murder. Iranian judicial authorities keep silent about 88 percent of executions, leading human rights advocates to refer to them as “secret executions.”

Two other suspected gay men – 32-year-old Mehrdad Karimpour and 29-year-old Farid Mohammadi — were hanged in January for the crime of “forced sexual intercourse between two men” involving a 16-year-old boy. The two men spent six years on death row before their execution.

Despite the seriousness of the charges facing the executed men, Shadi Amin, executive director of the Iranian LGBTQ advocacy group 6Rang, told Insider, “Rule of law and fair trials do not exist in the Iranian judicial system” and as such, “any ruling issued in this system cannot be considered credible and legitimate.”

Peter Tatchell, the British LGBTQ-rights activist told The Post, “[In Iranian courts] defendants are routinely denied access to lawyers and defense witnesses. They can be sentenced after brief ‘trials’ lasting as little as 20 minutes, with lawyers provided only shortly before the court hearing starts. People can be found guilty without corroborating evidence.”

A 2014 report from 6Rang and Justice for Iran found that LGBTQ Iranians are “excluded from family homes, denied employment, prevented from going to school, forced to marry, sent to jails and detention centers, sentenced to flogging and execution, and subjected to ‘street’ violence and other physical and verbal attacks in public and private settings.”

According to a 2008 British WikiLeaks diplomatic cable, Iran has executed between 4,000 to 6,000 gays and lesbians since the nation’s Islamic revolution in 1979.