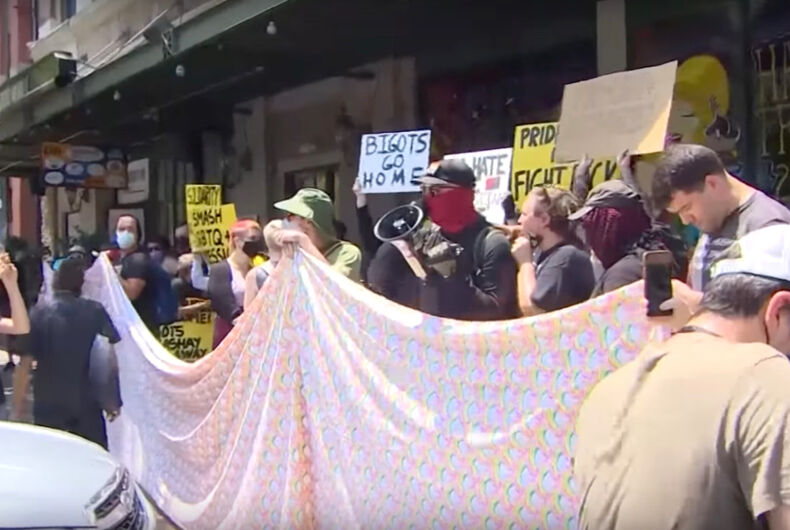 More than 100 people gathered outside Hamburger Mary’s in downtown Houston on Sunday to counter an anti-LGBTQ protest across the street.

Related: Dozens of far right extremists squeezed into a U-Haul to go start a riot at Pride

About a dozen demonstrators led by Protect Texas Kids founder Kelly Neidert gathered across the street from the restaurant to protest its Sunday Drag Brunch shows. The small crowd included at least one man wearing a Nazi symbol and members of anti-LGBTQ hate groups.

The pro-LGBTQ protesters, reportedly organized by the Screwston Anti-Fascist Committee, held up signs that read “Pro-LGBT+ Anti-Fascist” and “Bigots Go Home,” while blasting pop songs to drown out the group’s hateful rhetoric.

“I don’t think parents should be allowed to take their kids to these events, and I think that there should be a law banning it from happening,” Neidert told the Houston Chronicle, echoing recent anti-LGBTQ misinformation that has proliferated on right-wing social media and has been adopted by mainstream Republican lawmakers.

“My biggest thing is when they start pushing their indoctrination or agenda toward kids,” Nidert told Houston’s KPRC 2. “When they are adult and doing adult things, whatever, but when they are having these highly inappropriate sexual provocative shows and they are allowing children inside and parents encouraging their kids to hand the performers money, that’s where I and most conservatives have a problem.”

“We don’t need a drag queen as an example to children,” said Tracy Shannon, with Mass Resistance Texas, “We do not market certain things to children.” The Southern Poverty Law Center classifies Mass Resistance as an anti-LGBTQ hate group.

One man who identified himself as “Ron” wore a swastika pendant and can be seen shouting homophobic slurs like “fa***ts” at the counter protesters in video posted to social media.

Some with Kelly Neidert’s group are now shouting hate speech

Neidert tried to distance her group from those wearing Nazi paraphernalia. “When antifa put out a call, and some of them are more extreme on the left, it brings out the extreme on the right,” Neidert said.

Hamburger Mary’s website does not specifically market the chain’s Sunday brunch shows to children. A spokesperson distanced the restaurant from both demonstrations according to Houston’s KHOU 11.

Spurred by misinformation from social media accounts like Chaya Raichik’s Libs of TikTok, far-right hate groups have attempted to disrupt multiple LGBTQ celebrations and Pride-themed story time events for children across the country in recent weeks. The disruptions have inspired supporters of the LGBTQ community to lead counterprotests, like the one at Hamburger Mary’s, in some cases creating human shields to protect parents and children from anti-LGBTQ hate speech.

“They need to be told that what they have to say is not welcome here,” one counterprotester in Houston said on Sunday. “You don’t get to go around in polite society with these bigoted views, so that’s why we came out to support our community.”