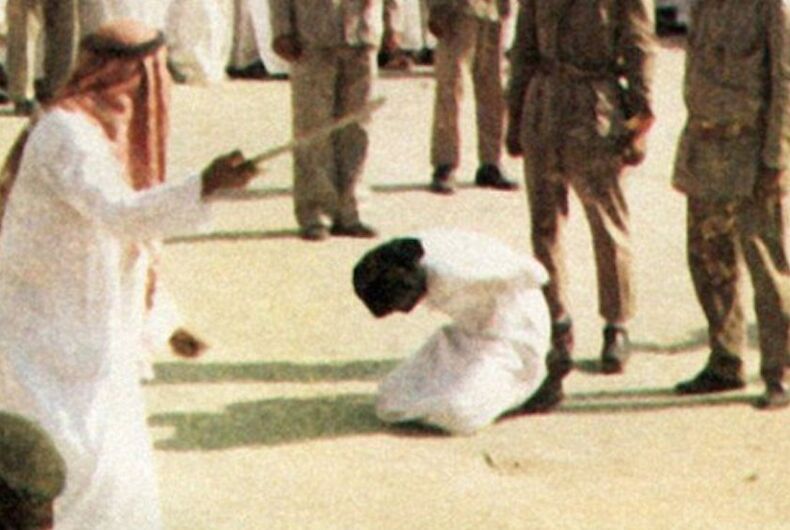 A man accused of being gay is executed in Saudi Arabia in 2019.Photo: Amnesty International

On July 15th, President Biden is set to fly to Riyadh, Saudi Arabia, where he will shake hands with Saudi Crown Prince Mohammed bin Salman, a dictator who rules over one of the world’s most homophobic governments. This looming event is already putting President Biden’s most prominent gay and lesbian staff members in the difficult position of promoting a U.S. alliance with a dictatorship that has done much harm and even killed LGBTQ people.

Biden is the first U.S. president to choose openly gay and lesbian individuals as his top press spokespeople. White House press secretary Karine Jean-Pierre and State Department spokesperson Ned Price both came into their appointments with much celebration in our LGBTQ community. Jean-Pierre’s appointment is doubly historic – she is also the first Black American to hold this position.

As a gay man myself, I am often thinking about the history of the LGBTQ movement around the world and how closely it connects to the broader struggle for human rights and dignity. Amidst the ongoing battles for LGBTQ equality and dignity here in the U.S., we also have an obligation to stand together with people struggling for their own freedoms in other difficult places.

But as often happens, when members of a marginalized community gain prominence and break through the barriers of bigotry, the victories of representation can quickly slide into the uglier challenges of cooptation. It is difficult to know what their personal feelings are on this matter, but both Jean-Pierre and Price have already been put to work defending the gradual warming of relations between the Biden Administration and a Saudi dictatorship that has enabled significant violence against LGBTQ people inside Saudi Arabia.

Saudi Arabia’s horrible reputation on LGBTQ human rights is widely known.  The U.S. State Department’s own human rights report states, “Under sharia, as interpreted in the country, consensual same-sex sexual conduct is punishable by death or flogging, depending on the perceived seriousness of the case.”

As documented by Human Rights Watch, LGBTQ+ communities in Saudi Arabia face discrimination and significant risks of persecution, violence, and even murder, including from Saudi authorities.  The 2017 likely torture and killing of a transgender Pakistani woman while in Saudi police custody is one example. The escape of Mu’ayyad, a gay man, from Saudi Arabia after being tortured by Saudi police is another.  And if homosexual activity is discussed online, Saudi judges and prosecutors can use language from the country’s anti-cybercrime law to prosecute the participants.

That is why it is particularly galling to see some of Biden’s top LGBTQ appointees speaking positively of Biden’s outreach to Saudi Arabia’s dictator.  Jean-Pierre sought to present Saudi Arabia’s monarchy in historical terms as “a strategic partner of the United States for nearly eight decades.” Meanwhile, State Department spokesperson Price has spoken repeatedly of “our Saudi partners” and “the strategic ties between the United States and Saudi Arabia.”  And while the State Department has documented the Saudi government’s violent homophobia, officials like Price rarely if ever mention such concerns when speaking about U.S.-Saudi relations.

Of course, LGBTQ communities aren’t alone in their suffering under Saudi Arabia’s government.  Under the current ruler, countless human rights advocates have been imprisoned on lengthy sentences.  Women’s rights advocate Loujain al-Hathloul remains trapped in the country under a travel ban.  And thousands of Yemeni civilians have been bombed and killed by Saudi fighter jets that have been maintained by U.S. military contractors.

To make matters worse, Biden’s looming homophobic handshake with Saudi Arabia’s ruler is also paving the way for even more U.S. military commitments across the Middle East.  Biden’s trip is part of a set of conversations, proposals, and announcements that could trap the U.S. in a military alliance against Iran for years to come, increasing the risk of yet another U.S. war in the region.

As a candidate for president in 2019, Biden said that he would treat Saudi Arabia’s government as a “pariah,” following the murder of Saudi dissident Jamal Khashoggi and years of Saudi war in Yemen. Unfortunately, he has done the opposite since entering the White House. Biden’s actions demonstrate the real dangers that LGBTQ+ communities can face when our entry into circles of power is used to promote policies that many of us oppose. Indeed, Biden is now deploying his own LGBTQ+ staff to promote a future handshake with a homophobic dictator. Biden should cancel his trip to Saudi Arabia.