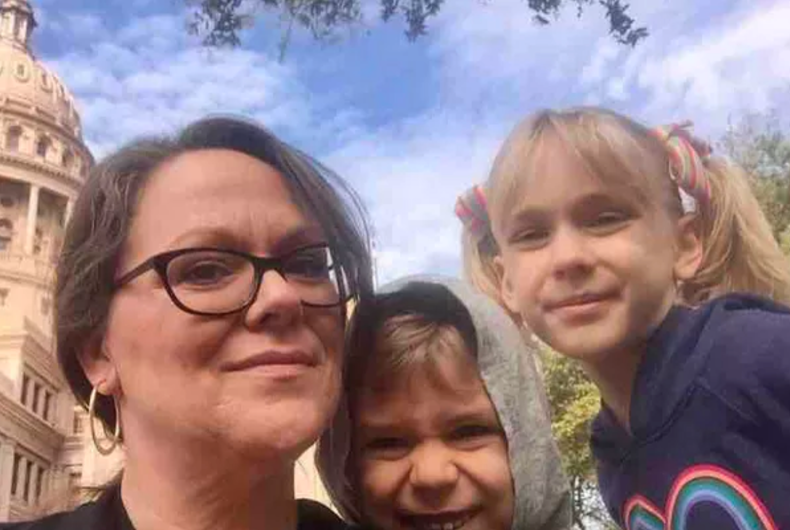 Eleven-year-old trans activist Kai Shappley is leaving her home state of Texas with the support of hundreds of donors on a GoFundMe campaign.

“My mom sold our home & everything that doesn’t fit in our car because the state I was born in is not safe for trans kids. Anyways… happy Independence Day to everyone who gets to celebrate that.”

My mom sold our home & everything that doesn’t fit in our car because the state I was born in is not safe for trans kids. Anyways… happy Independence Day to everyone who gets to celebrate that 🇺🇸 pic.twitter.com/w4up325OIm

Shappley came to national attention as she and her mother battled Texas’ growing anti-LGBTQ movement. She’s been living as a girl since the age of four.

She made news in 2016 when the school board in Pearland, Texas denied her use of her kindergarten’s girl’s bathroom.

Last year, Shappley testified in the Texas senate against proposed legislation to define gender change for minors as child abuse, and her testimony went viral online.

“It’s not just trans kids Texas is harming by scapegoating them for political purposes,” Kimberly Shappley wrote on a GoFundMe page she hopes will help get her family out of the state.

“My youngest son, 9 years old Kaleb, who is cisgender regularly expresses fear that he would be taken from me by state agents and fear for the irreparable damage he knows would be caused to his sister were she forced to de-transition.”

“When states target trans kids, their parents, and their doctors,” Kim writes, “there is collateral damage – so I’m looking for a new State where my daughter will be allowed to be a kid, and my youngest son will no longer have to worry about being taken from me or his sister.”

With the help of hundreds of supporters, Shappley’s family got some breathing room.

As of Friday, over 300 donors to the “Trans Kid’s Family Searching For Sanctuary” campaign had raised close to $30,000 for the move.

The comments accompanying the donations, from five dollars to $4000, supported the family.

“Helping this family out is something all of us can do to protect everyone’s rights. And if you’re LGBT, you’ll feel better, helping to fight the ridiculous hatred aimed at our community.”

“My heart breaks for y’alls family and I want to help as much as I can during this time.”

“From a trans girl stuck in the state of Georgia, I am so scared of what will happen here. I hope my small donation can help. It takes a village. I love you and your family, Kimberly.”