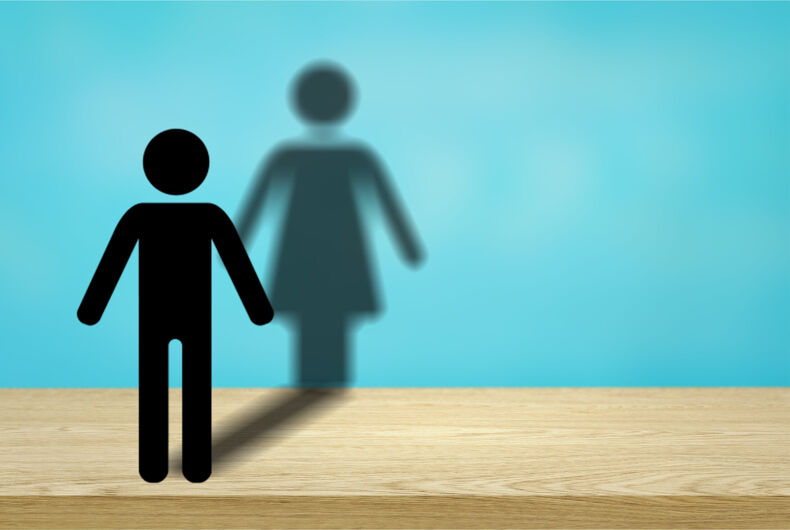 If you’re on TikTok a lot, you may have come across the term “gender envy”. The term trended last year as dozens of TikTok users would try to describe what it feels like or create compilations of fictional characters, celebrities, and even TikTok videos that “give them gender envy”.

But what does it all mean? What is gender envy and what does it feel like? Below, we unpack the term gender envy, its meaning and origin, as well as the types of people who tend to experience it.

Related: What does it mean to be transfeminine?

According to PFLAG, “gender envy is a casual term that is used primarily by transgender people to describe “an individual they aspire to be like”. The term refers to “having envy for an individual’s expression of gender (for example, wanting the physical features, voice, mannerisms, style, etc., of a specific gender).”

Gender envy can also be felt by people who express themselves in such a way that goes against what their culture and society typically expect of their gender. As such, gender envy is not limited to transgender and non-binary people and can be felt by cisgender people who may express their gender in a more masculine or feminine way than what is expected of them.

Where Did The Term Come From?

Gender envy is not a clinical term by any means, but it is believed to have been loosely derived from Sigmund Freud’s theory of “penis envy”. Freud is a controversial figure in psychology who is credited with founding the therapeutic method of psychoanalysis.

Freud theorized that humans are not aware of or repress most of their thoughts. He compared the mind to an iceberg wherein a large part of our minds lay beneath the surface or in the “unconscious”. Through psychoanalysis, which involved allowing patients to speak freely about whatever came to mind, Freud believed that therapists could unlock these repressed thoughts and bring them to the conscious level.

Freud also sought to psychoanalyze himself, and in doing so, developed his now famous and much-debated theories on the Oedipal complex and “penis envy”. The former, according to Freud, describes a phase in a male child’s development wherein he is attracted to his mother and views his father as his rival.

With this concept of penis envy, Freud theorized that the male gender was considered the ideal, and thus every girl supposedly bears a deep desire to be male. It is only when a girl disavows her desire to be male that she can identify as female.

It should be stressed that most modern psychoanalysts reject the notion of “penis envy”. But, while there is very little evidence to support these claims, Freud’s theories have stuck around and are still referenced today.

Who Can Experience Gender Envy?

Despite sharing a similar name, the concept of penis envy is very different from the concept of gender envy. The latter merely describes the feeling of being envious of someone for how they express their gender.

For example, a cisgender man with a penchant for floral prints and loud, colorful clothing may feel gender envy towards women who can wear these things without being ridiculed or questioned about their sexuality.

Conversely, a cisgender woman who enjoys contact sports and prefers to dress casually may feel gender envy towards her male friends, especially when her family and the people around her force her to participate in more “feminine” activities and dress in clothes that are considered more “girly”.

Gender dysphoria is described as “​​clinically significant distress or impairment related to a strong desire to be of another gender”. For many trans and non-binary people, gender dysphoria can be severely debilitating and can result in mental issues such as depression and anxiety. As such, many of those who do experience gender dysphoria may opt to undergo gender-affirming surgery or change the way they present and express themselves to relieve some of that distress.

Gender envy is different from dysphoria in that the former can be described as merely a feeling of jealousy or even admiration of how another person looks or acts, while the latter describes a level of discomfort and distress from one’s own perceived gender – so much so that the person feels compelled to seek out measures to change how they look. That being said, gender envy can perhaps lead to dysphoria, but this is not necessarily the case for everyone.

Gender envy and gender dysphoria also tie into the concept of “passing”, which is described as a transgender person’s ability to “pass” or to be correctly perceived as the gender they identify with. For many, passing means that you don’t get clocked as transgender and are perceived as cisgender.

Gender envy describes a phenomenon most commonly felt by transgender and non-binary people wherein they feel jealous of the way another person looks, talks, and acts. You could liken gender envy to “transition goals” or the type of person you’d like to emulate when you transition. However, gender envy could also stem from or result in negative feelings towards your gender.

If you or someone you know is experiencing depression/anxiety or having thoughts about self-harm and suicide, don’t hesitate to call ​​the National Suicide Prevention Lifeline at 1-800-273-8255 or 911.

Related: How to be a better straight ally to LGBTQ people

This Week on LGBTQ Twitter: Prepare for Queer Wrath Month