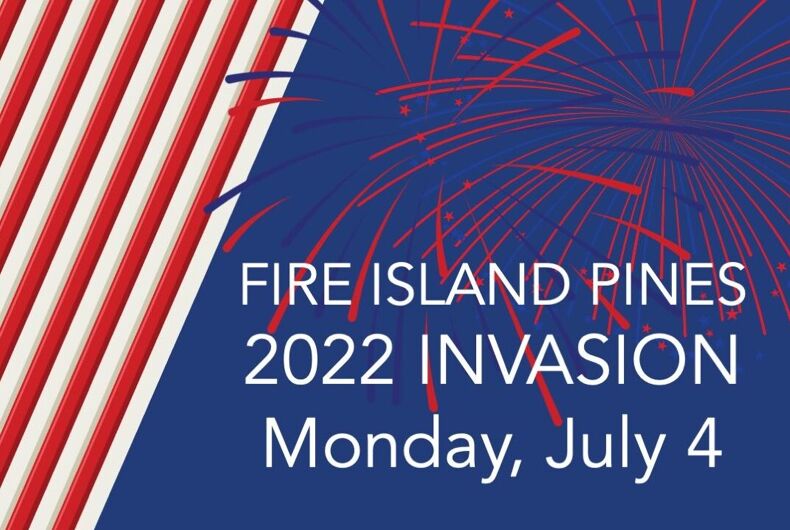 Or you can just lay back and enjoy the fireworks.

This Independence Day, LGBTQ enclaves across America celebrate the nation’s founding with the usual pyrotechnics plus a boat parade, pie, bears and a drag invasion to rival George Washington crossing the Delaware.

Please rise then for a roundup of what to do this July 4th weekend at America’s most popular LGBTQ destinations.

Set on a beach at the tip of Cape Cod, Provincetown is one of the oldest towns in America and where the Pilgrims signed the Mayflower Compact, a forerunner to the U.S. Declaration of Independence. Today it’s a thriving artists’ and LGBTQ community and weekend getaway for Bostonians and New Yorkers.

And at the waterside Boatslip Resort and Beach Club, watch the pyrotechnics from the IndepenDANCE Tea, or stick around until Wednesday to keep dancing at the Stars & Stripes Tea.

At the tip of the Florida Keys and just 90 miles from Cuba, Key West has attracted artists, pirates, and non-conformists of all kinds over its storied history, and it’s been an LGBTQ enclave for decades. Tennessee Williams and Truman Capote both called Key West home for a time. Ernest Hemingway had a house here and it’s still maintained as a museum, polydactyl cats and all.

The eastern half of Duval Street, the town’s main corridor, is the gay district.

For July 4th weekend on the refreshingly apolitical island, there’s more green than red, white and blue, as locals celebrate the Key Lime Festival, a four-day lovefest for “all things lime.”

Featuring literally dozens of events, from pie-eating contests to private gourmet dinners, the celebration starts June 30th with the Key Lime Kick-Off! on the veranda at Curry Mansion, built in 1869 and where Key Lime Pie was first created.

For the tradition-bound, there are fireworks the night of July 4th at Ed Knight Pier, with views from Smathers and Higgs Beaches, and lots of Independence Day-themed events at bars and clubs over the weekend including legendary hotel and caberet LaTeDa, 801 Bourbon Bar, home to Sushi the Drag Queen, leather bar One Saloon, Aqua Nightclub, Bobby’s Monkey Bar and favorite glitter-littered dive bar 22&Co.

Rehoboth Beach has been a popular getaway for DC, Philadelphia, and Baltimore LGBTQ communities for decades, with a summer population that swells to 50,000 during the season.

While the town sports over 200 LGBTQ-owned businesses, nightlife is understated. House parties provide a lot of socializing, many with an open door policy, but the action is mostly at the town’s two most popular beaches, Poodle Beach and North Shores, in the Gordon Pond Wildlife Area.

Independence comes a day early this year when fireworks launch on Sunday, July 3, with views from the town’s mile-long beach and boardwalk.

If you’re looking for a parade, hike north through Cape Henlopen State Park on July 4th to the nearby town of Lewes, home of the annual Lewes Independence Day Boat Parade on the Lewes-Rehoboth canal.

And if you like your holiday grilled, choose from the Pond Bar and Grill, the Purple Parrot Grill, the Aqua Grill, Rigby’s Bar and Grill and the Iguana Grill. Stop by Diego’s Bar Nightclub for a Fierce Friday, Shirtless Saturday, or the Independence Day Dance on the 4th.

The tiny town of Guerneville on the Russian River north of San Francisco has been an LGBTQ resort area since the early 1970s and features a number of hotels and campgrounds and a collection of small but popular bars.

The river winds its way through old-growth redwoods and vineyards in Sonoma County to the Pacific coast and is filled on hot days with tubers enjoying the cool water and lazy summer current.

Pyrotechnics are out this year in Guerneville due to fire danger, so find the flash at pool resorts like the R3 (Russian River Resort), where DJ Sam spins patriotic tunes nightly July 1-4, or look for a rhinestone cowboy at the charming Rainbow Cattle Co.

On the 4th, you can head down to the river shore just west of town where a mixed crowd of locals congregates annually in the water with DJ stations, beer coolers, and anything else that floats, while in nearby Monte Rio, firefighters host a Five Alarm Firefighter BBQ in the afternoon for charity.

The adjacent towns of Saugatuck and Douglas, east of Chicago on the shore of Lake Michigan, is home to over 140 gay-owned businesses, from art galleries and ice cream shops to hotels, bars, and restaurants.

Lots of artists plus local protections for gender identity and sexual orientation make Saugatuck and Douglas, at the mouth of the Kalamazoo River, a Midwest Provincetown, as locals like to call it, along with stunning beaches and plenty of outdoor activities.

Oval Beach, with a backdrop of rolling sand dunes, is considered one of America’s most scenic.

The July 4th Parade kicks off at 10 a.m. and winds through the adjoining towns to Saugatuck’s Village Square. A Fireworks show at dusk can be watched from anywhere around Kalamazoo or at one of the area’s many parks.

This Movie Colony getaway in the Coachella Valley two hours east of LA is a desert oasis catering to a wide variety of visitors, and home to a large LGBTQ population, lots of whom are “gay going gray,” in the local parlance.

Palm Springs doesn’t host an Independence Day Parade (too hot!), but after a two-year absence due to the pandemic, fireworks are back with an “All American Fourth of July Spectacular” at the Palm Springs Stadium, following the Palm Springs Power Baseball “All-Stars Summer Collegiate Game” at 6 p.m.

The Palm Springs Aerial Tramway extends hours so you can watch fireworks across the Coachella Valley on the trip down from San Jacinto Peak, the last car at 9:30 p.m.

With sizzling summer days and warm nights, Palm Springs is also home to more than its share of clothing-optional spots, including the CCBC Resort, where the bears come out for a July 4th weekend DadFest.

And if you’ve served patriotically, let the Barracks or Tool Shed serve you with a discount for all their July 4th weekend events when you show a military ID.

This small barrier island off the south coast of New York’s Long Island is home to two thriving LGBTQ resort towns: Cherry Grove and Fire Island Pines. A train from Penn Station in New York and a 30-minute ferry ride across Long Island Sound land you barefoot on one of the most beautiful beaches in America.

It’s unique for a lot of reasons, among them: there are no cars on the island. In place of streets, Fire Island is lined with boardwalks, traversed by a diverse community pulling little red wagons. The two towns each have their own vibe: “party” in The Pines, “chill” in Cherry Grove. Both are populated with weathered beach houses, from small shacks to multi-million dollar architectural statements.

While Cherry Grove and the Pines don’t sponsor a July 4th fireworks display, you can watch the pyrotechnics go off after dark from any beach on the north side of the island across Long Island Sound.

The main event every July 4th is the Fire Island Pines Invasion, commemorating the day in 1976 when friends of a drag queen denied entry to a restaurant in the Pines boarded a water taxi from Cherry Grove and stormed the town on Independence Day. They’ve been invading every year since, now to the cheers of thousands of locals and visitors.

Four venues on the waterfront at Pines Harbor offer views of the Invasion, including the legendary Pavilion, Sip ‘n Twirl, The Pool Deck, and the Blue Whale, where performances by Pixie Aventura, Bubbles d’ Boob, Bootsie Lefaris, and Miss Ogeny add local color to the red, white and blue commemoration.

Victories for LGBTQ rights around the world so far in 2022

It’s okay to feel angry this Fourth of July. It means you’re a good citizen