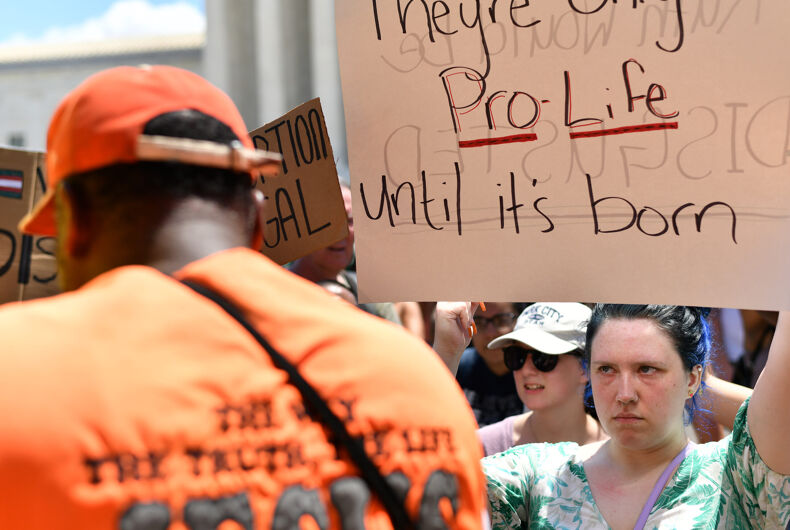 We’re all angry, beyond angry even. There’s a sense of overwhelming dread that is plaguing all of us with everything that’s happened this year. Anti-LGBTQ bills are sweeping the nation, targeting transgender individuals and the rest of the LGBTQ community. Roe v. Wade is dead and many protections for LGBTQ people, including gay marriage and anti-sodomy laws, are next on the guillotine.

Pride Month felt inconsequential during a time when people are systematically attacked just because of who they are and the identity they have. We tried to celebrate, but the joy of being proud this month was overshadowed by the hard truth that the country we live in is in dire need of protection against people trying to dismantle human rights. So, how can we celebrate the Fourth of July?

The Fourth of July should be a proud moment for any American, celebrating our independence as a country and rejoicing behind the ideals our country stands behind. Unfortunately, we can’t feel that way right now. How could anyone feel patriotic?

At this moment, 18 states have a state law that bans transgender students from participating in sports consistent with their gender identity. This means that transgender women are unable to compete in sports with cisgender women, forcing them to either not compete or compete with a gender they don’t identify with.

These state laws affect transgender girls in school and even transgender women in college. A study by the Trevor Project found that 42% of LGBTQ youth seriously considered attempting suicide in the past year, including more than half of transgender and nonbinary youth. 94% of LGBTQ youth also reported that recent politics negatively impacted their mental health.

Sports help students feel less isolated and more a part of their school community. By allowing transgender students to participate in school sports, suicidal ideation and negative mental health can be helped.

It’s not only sports that have been targeted by anti-LGBTQ lawmakers. Healthcare for transgender youth has also been dismantled by many states this year. Healthcare for LGBTQ youth is also something that affects suicidal ideation and negative mental health.

So far this year, there have been 25 laws submitted in various states that target healthcare for transgender youth, making it so that transgender youth can’t access the type of medical care that is necessary for them so that they can identify with the gender they are.

In Ohio, a current bill in committee is set to prohibit certain procedures to alter a minor child’s sex and to designate the act as the Save Adolescents from Experimentation (SAFE) Act. There is no such experimentation being conducted on children to make them transgender. These types of bills claim that transgender youth aren’t real and that society is turning people transgender.

It’s these types of bills that make a person angry and feel unpatriotic knowing that children are being targeted by those who do not accept their identity. And they don’t only target transgender individuals but healthcare professionals also. There are numerous laws being submitted that make it illegal for a physician to help aid transgender youth with their gender transition.

There are also laws being submitted that invite the state to investigate parents of transgender youth if they help aid with their transition. So far, there have been over 200 laws submitted this year that target LGBTQ people.

From bathroom bills, where a transgender individual can only use the bathroom of the gender they were assigned at birth, to “Don’t Say Gay” laws, where public school teachers are not allowed to discuss sexual orientation or gender identity, LGBTQ individuals are being attacked in every aspect of their existence.

Then there’s Roe v. Wade, the landmark case that has provided reproductive healthcare for all people. In a 6-3 decision, the Supreme Court justices ruled in Dobbs v. Jackson Women’s Health Organization that the constitutional right to an abortion, which has existed for nearly half a century, no longer exists. States can now ban abortion, and about half are poised to do so.

This was a tremendous loss for the entire United States. People don’t often look at Roe v. Wade as an LGBTQ issue; however, there are countless LGBTQ individuals who are affected by this outcome. And also, as a marginalized group, LGBTQ people should be standing in solidarity with all people affected by this decision.

But the end of Roe v. Wade also signifies the potential end of marriage equality and the return of sodomy laws.

In a footnote to his concurring opinion, Thomas said that in striking down the legal basis for abortion, every other decision using the same reasoning is now suspect. That includes Obergefell v. Hodges, which legalized marriage equality nationally, and Lawrence v. Texas, which struck down sodomy laws. In fact, he named those decisions by name.

There’s a lot for the country to be angry about, civil rights are being dismantled all over. So, how can one celebrate the Fourth of July?

It’s important for all of us to feel angry with what’s going on. Anger and resilience can help us fight back against the cruelty of the laws being put in place. We must act by standing up to injustice in any form we can. It’s what our country did when it fought for independence. Standing up to tyranny is in our constitution, so what better way to celebrate the Fourth of July than by getting angry?

That’s what it means to be an American. It’s important to stay informed and act, and with our combined efforts we can all work towards a better future for everyone.

Celebrate July 4th at these LGBTQ destinations across America

5 LGBTQ anthems that are spangled with way more than stars