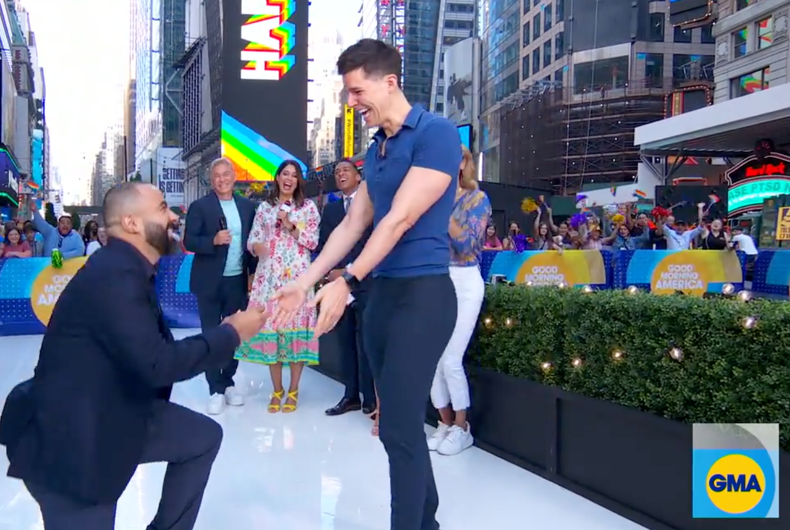 Will you marry me?

Related: Judge Greg Mathis had a message of love for his closeted gay son on his new show

It might be a little early in the day for surprise marriage proposal, but that’s what happened live on the set of Good Morning America in Times Square last Friday.

Jose works for Disney’s Lion King tour and brought boyfriend Matthew to New York under the pretense of seeing the show. The two have been together since January 2021. 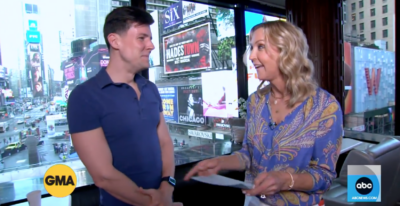 No one was more excited than GMA co-host Lara Spencer, who was giddy with anticipation through three clues that took Matthew around Times Squares to meet Aladdin‘s Genie and RuPaul’s Drag Race favorite Alyssa Edwards.

In morning TV fashion, both boyfriends were interviewed on the fly. 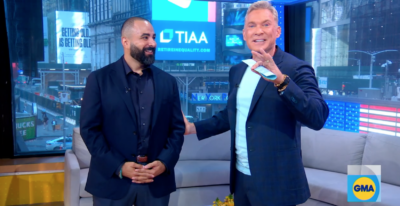 “You’re getting ready to pop the question of your life moments from now. Your palms are dry. How are you feeling?!” he asked.

“I’m nervous and excited,” Jose responded. “He had no idea this is happening, so he’s probably freaking out.”

“I think he’s having fun, though. And if you’re going to have fun with anyone, it’s Lara Spencer.”

In Shubert Alley, Spencer ratchets up the suspense. 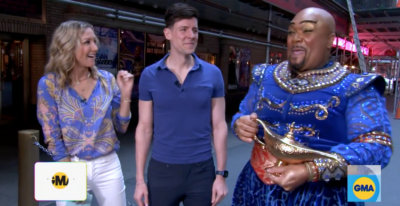 “All we know is that we’re with Genie from Aladdin on Broadway, it doesn’t get better than this.”

“You’ve got three wishes and I will grant you one. I hope your time with Lara has been fun,” Genie rhymes for Matthew. “You’re almost there, just a bit more to go. Just head down the street to the GMA studio.”

Gathered with her co-hosts on the Times Square set, Spencer checks in with Matthew.

“Good, a little shaken up.”

“Matthew, are you ok?

“Matthew’s, like, he’s a little bit in shock. Are you ready?”

“Our journey has almost come to an end, which makes me sad, because I love you.” 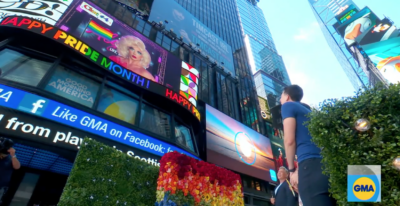 “A scavenger hunt can be an absolute drag, but you’ve reached your last clue, so I’m waving my flag. Solving these clues, you’ve been quite clever, but now it’s time to start your forever. America’s watching, they’re in on the plan, but one thing is missing, where is your man?”

“Good question,” Spencer concurs. “Where is your man?”

Another look up at the Jumbotron reveals Jose, with a romantic montage of the couple’s time together.

“What I do love about Matthew is he’s truly himself 100% of the time. What sort of clicked was the ease of being together. He was just so joyful.”

“I think I realized Matthew was the one when I told him I loved him. As soon as I said it he burst into tears. Matthew uplifts me as a partner. He’s always encouraging. He never ever makes me feel like I’m not able to do something.”

Millennial Matthew snaps a pic on his phone through the tears. 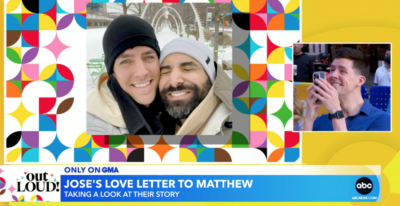 “I am ready for a lifetime of adventure because Matthew is an adventure. I’m at my happiest when I’m with him. Matthew, I love all the time, and I will love you all the time. And I have an important question to ask you.”

With that, Jose appears from behind a wall of roses, drops to one knee, and pops the question.

“You bring so much to joy to my life,” says Jose. “You bring joy to everyone’s life. I can’t believe we found each other.”

You could hear a pin drop on the Crossroads of the World.

“I love you,” says Matthew. 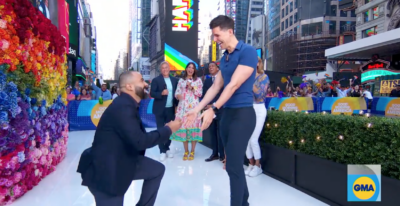 “Will you marry me?”

While they didn’t get the shot, Matthew says yes.

Jose slips on the ring, and it fits. 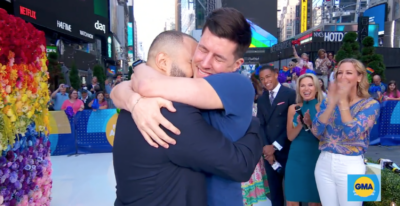 With hugs all around, the GMA hosts bring out two of Matthew’s 12 siblings to surprise him, with the rest waving live on the Jumbo.

Holding them close, Matthew sobs: “I thought you were made at me because you unshared your location.”