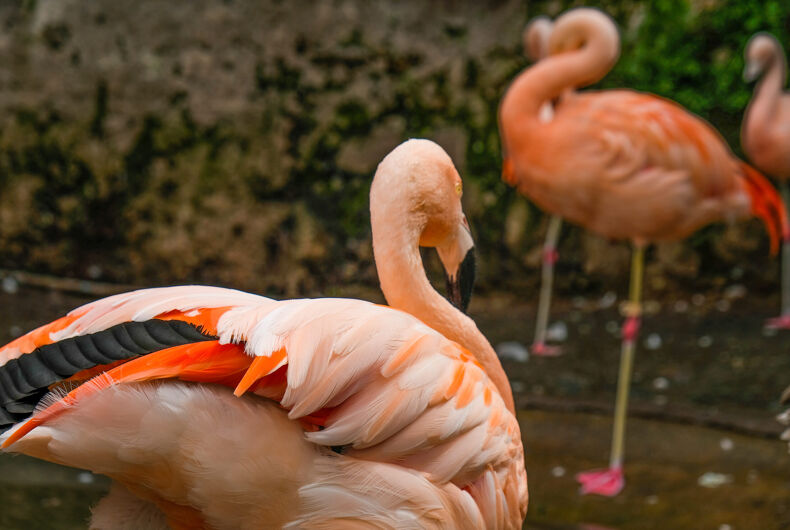 A pair of male flamingos at the Denver Zoo made headlines during Pride month two years ago after keepers posted on social media that the two were a bonded pair.

But there’s always that one couple that doesn’t survive the festivities and this time it was the gay flamingos. Lance and Freddie have broken up.

Related: 5 key facts about the history of Pride

“Did you know that Denver Zoo is home to a same-sex flamingo couple? Chilean flamingo Lance Bass and American flamingo Freddie Mercury have paired up for several years,” the zoo posted on Facebook for Pride month in 2019. The birds were named after the queer musicians.

But now the zoo has announced the couple has split up after one of the flamingos started stepping out. They acknowledged that the news “may have ruffled some feathers.”

“Please rest assured that both Freddie and Lance are in good health, weren’t separated and their break up was amicable,” keepers wrote. “Mating for life isn’t necessarily true for all birds, and our keepers have noticed that some birds in long-term relationships sometimes decide to move on and pair up with other birds.”

“Freddie repaired with Iommi, one of our fourteen-year-old female American flamingos. Iommi has been around Freddie for nearly her entire life without any indication of a bond before, so keepers aren’t exactly sure why these two decided to pair up. As for Lance, keepers haven’t noticed him in a new concrete bond with anyone else at the moment.”

“As we mentioned in yesterday’s post, flamingos are incredibly social animals that form unique and intricate bonds,” the staff continued. “Some birds are in male-female breeding pairs. Some birds are in same-sex bonded pairs. Some birds are mated pairs their whole lives, some will have multiple partners in their lifetime and others won’t have a mate at all. Our flock allows our birds to choose who they decide to form associations with and we’re happy to celebrate their pairings this month and every month. Happy Pride!”

Reacting to the horrible news, the real Lance Bass posted on Instagram that this officially made it the “Worst Pride EVER!” even if his namesake seems to have moved on without a backward glance.